PHOENIX – After years of riding the school bus to and from school in south Phoenix, Angelica Beltran Cuevas noticed she was battling for breath.

“It just got so bad at times that I had to go to the hospital. I couldn’t breathe anymore,” she said.

Beltran Cuevas was diagnosed with asthma in the third grade. Afterward, her family moved from south Phoenix for her health. She’s now a senior at Metro Tech High School in central Phoenix.

She attributes her heightened asthma to diesel exhaust from the buses and the poor air quality in south Phoenix.

Beltran Cuevas is one of the more than 174,000 Arizona youths with asthma, according to the Arizona Department of Health Services.

Vianey Olivarria, a communications strategist with CHISPA, a climate-advocacy group for Latino communities sponsored by the League of Conservation Voters, said she sees a disproportionate number of Hispanic children with respiratory issues.

“People don’t make the connection that your environment affects your health, until it literally does,” Olivarria said. “There’s a lot of kids in south Phoenix who have asthma.”

A recent nationwide study published in Proceedings of the National Academy of Sciences found a gap between groups of people who contribute more to pollution-creating industries and the groups who end up breathing that pollution.

“Blacks and Hispanics on average bear a ‘pollution burden’ of 56% and 63% excess exposure, respectively, relative to the exposure caused by their consumption,” said the study, which was written by Christopher Tessum, research scientist at the University of Washington.

Nationwide, non-minority groups are helping to contribute to the air pollution that more minorities face, he said.

The report cites fine particulate matter found in smoke and dust to be especially harmful to the lungs.

“That can cause problems with your respiratory system, with your breathing, with your heart,” Tessum said. 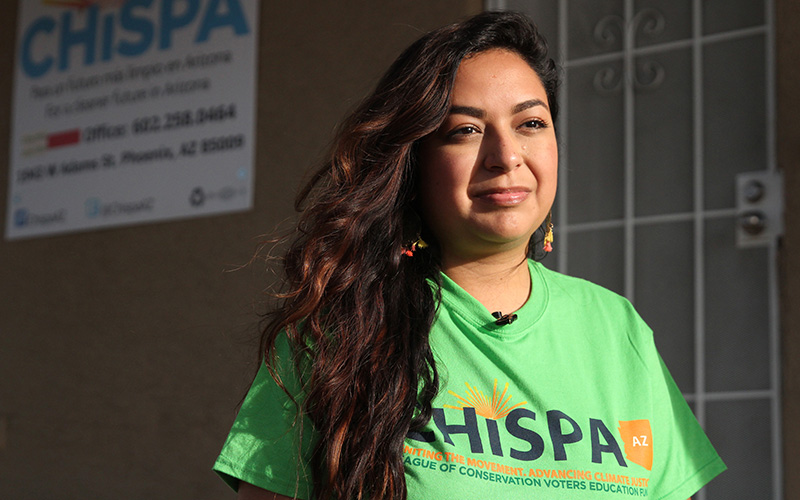 Vianey Olivarria works as a spokeswoman with CHISPA, an outreach arm of the League of Conservation Voters to engage Latino communities in conversations surrounding environmental concerns. Many parents in south Phoenix come to the group out of concern for the health of their children, she says. (Photo by Lillian Donahue/Cronkite News)

In its 2019 State of the Air report, the American Lung Association ranked Phoenix 13th out of 217 cities across the United States for highest daily particle pollution and seventh for high ozone days out of 228 metropolitan areas.

“The evidence is clear that they often live near some of these sources that are big emitters,” Nolen said. “Or that they have more risk of disease, or that they may have a harder time getting medical care because of where they live or their income.”

Beltran Cuevas was able to identify her asthma and continuously treat it; however, other poor or Hispanic children don’t have that luxury, she said.

“There’s many kids with asthma who can’t afford to go to the hospital because they don’t have access, so it just makes the problem worse,” she said.

Timothy Franquist, the air quality director for the Arizona Department of Environmental Quality, said he sees some of the highest concentrations of fine particulate matter in south Phoenix but points to a geographical reason.

“That’s probably more of a function of a bowl effect of the valley,” Franquist said “We have a lot of the recreational fires in the holidays, so the smoke does sink to that area.”

But Beltran Cuevas said it was the diesel buses that exacerbated her asthma. She and community advocates hope that lawmakers and city officials can make incremental changes to lessen air pollution in south Phoenix.

“We’re fighting for schools to take the initiative and leadership and introduce electrical vehicles,” Olivarria said. “I think that’s a path forward is just to look into the technology and the innovations and the leadership of the people who are asking for this.”

Beltran Cuevas said the problem expands farther than just one neighborhood, affecting everyone.

“I really do hope the air quality improves because this is the Earth we’re talking about. We don’t have another one we can go to, unfortunately.”