Herlinda Calderon keeps her 10-year-old indoors because of her asthma, but the girl has to ride to and from school on a diesel bus, which worsens her symptoms. Calderon joined Chispa Arizona to find a solution. (Photo by Andrea Estrada/Cronkite News)

PHOENIX – Oslin Lopez is not like most 10-year-olds. She’s not allowed to play outside, ride her bike, let alone run. Her mother keeps her indoors, away from the polluted air in their neighborhood near 27th Avenue and Van Buren Street, which worsens Oslin’s asthma symptoms.

One outdoor activity the girl can’t dodge, though, is riding a diesel-powered school bus to and from Cesar Chavez Elementary School, something her mother, Herlinda Calderon, said has complicated her respiratory condition and overall health.

“Lately, she’s been having headaches, and it’s because she gets on the bus. She’s on it for about 20 minutes each ride,” Calderon said. “Sometimes her stomach hurts. She’ll vomit and have nausea. She calls me from school so I can pick her up.”

Calderon said her daughter is healthy on the rare days she doesn’t ride a school bus.

“It’s something we can’t control, though, because she has to take the bus,” she said.

In search of a solution, Calderon became involved with Chispa Arizona and its campaign Clean Buses for Healthy Niños, a nationwide effort that launched in April of 2017 to replace diesel school buses with electric ones through the Volkswagen Environmental Mitigation Trust.

In 2015, Volkswagen acknowledged its vehicles were programmed to cheat federal tailpipe-emissions tests, pumping more nitrogen oxides into the air than they were supposed to. The $2.7 billion mitigation trust was established to subsidize clean air projects across the United States. Arizona’s share of the settlement is $57 million. 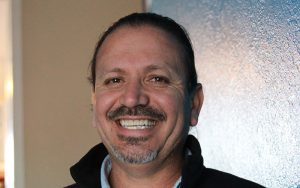 Masavi Perea, Chispa Arizona program director, believes that settlement money should be geared towards the 300,000 kids in metro Phoenix who ride diesel buses to school every day.

“What we are asking is instead of using those $57 million on something else, to use it where it can make a big difference, which is the school districts,” Perea said. “They can start changing those diesel buses for electric buses. That’s going to reduce pollution, and ultimately reduce the high levels of asthma.”

According to the Natural Resources Defense Council, diesel exhaust includes fine particles, which sink into the lungs, causing lung damage, infections and asthma. A child riding a diesel school bus inhales as much as four times the level of diesel exhaust as someone riding in a car ahead of the bus.

Perea said Clean Buses for Healthy Niños is focusing on low-income, minority neighborhoods where asthma is prevalent among children, including South Phoenix, west Phoenix and Maryvale.

“Sometimes we feel excluded,” she said, referring to her low-income neighborhood. “It shouldn’t matter that the people in this community are poor. In the end, we’re still human. We have a right to breathe fresh air. I wish they would turn their eyes to our communities.”

Sandy Bahr, the director of the Grand Canyon Chapter of the Sierra Club, which has shown its support for Clean Buses for Healthy Niños, also believes income should not determine who gets to breathe clean air.

“We have really high asthma rates, particularly high rates and issues in low-income communities and communities of color,” Bahr said. “These school districts, some of them have older buses that are the most polluting buses “Why should only wealthier people have access to the cleanest vehicles, particularly when we’re talking about kids? The pollution that they breathe as children can affect their lungs and lung capacity for the rest of their lives.”

Bahr said the only so-called good reason to oppose electric buses is their cost.

“But when you look at it,” she said, “you save money in the long run because the maintenance is lower, the fuel costs are lower, especially if you are using solar to charge. You could save even more money. There doesn’t seem to be a very good argument against that.”

“There is not one human being that says, ‘No, it’s better to have diesel than electric,’ ” he said.

Those on the other side of the issue, though, said they believe that diesel buses are the best bet.

Diesel Technology Forum is a non-profit organization that champions the use of so-called clean diesel technology. Its executive director, Allen Schaeffer, said the Volkswagen settlement money should be spent on projects that will have the greatest impact on air quality.

“It’s hard to argue that you should not have the latest in school bus technology for all the obvious reasons,” he said. “But at the same time, if you’re looking for the greater public good for reducing air pollution for all Arizonans, the greater benefits are likely to come from other places. Everybody wants their child to ride on the safest, most advanced school bus that’s out there. I think everybody understands that. For this particular settlement and these investment dollars, however, this is about getting the most clean air benefits for Arizona.”

“School buses don’t really drive a lot of miles compared to commercial trucks or some large off-road engines or equipment that might be running 16 hours a day,” he said. “They don’t really put out the kind of emissions in volume that some other sources do. The other thing about school buses is, unless you have school year round in Arizona, they’re parked for two months of the year, maybe three.” 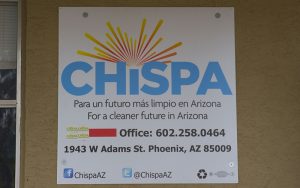 Schaeffer said a switch from diesel to electric is a niche investment that wouldn’t do much but appease those who advocate for it.

“And so all the kids that live in that area, they might be riding electric buses to school every day, but they’re going to be breathing air that’s dirtier and dirtier than it was before,” he said. “If you’re really interested in clean air for kids, you have to think about that not just while they’re riding the bus. You want to have clean air when they’re playing outside, when they’re home.”

Gallego – who’s running for mayor – said that after talking with people in the community, the need for safe school buses became apparent.

“We have areas in Phoenix with really high rates of youth asthma, so it seemed like a perfect use of the Volkswagen settlement fund, to help kids get to school safely and to improve our air,” she said in a phone interview.

According to the League of Conservation Voters, Arizona Gov. Doug Ducey is willing to consider gearing Arizona’s Volkswagen settlement towards new buses.

“He gave a statement that it’s probably a good idea to invest in clean buses,” Perea said. “Even though he’s not having a conversation with us, at least now he’s considering this idea.”

Gallego said she thinks Ducey eventually will voice support for this campaign, something parents like Calderon have been longing for.

“If he took the time to see just how bad the contamination is in this area, our lives would change tremendously,” Calderon said.

“Even more importantly, the lives our of children.”

Arizona Rep. Charlene Fernandez, D-Phoenix, who represents District 4 and was a sponsor of Clean Buses for Healthy Niños, is among the state officials encouraging community members to participate in the public comment period of the Volkswagen settlement. Arizona is expected to submit a mitigation plan sometime in spring.