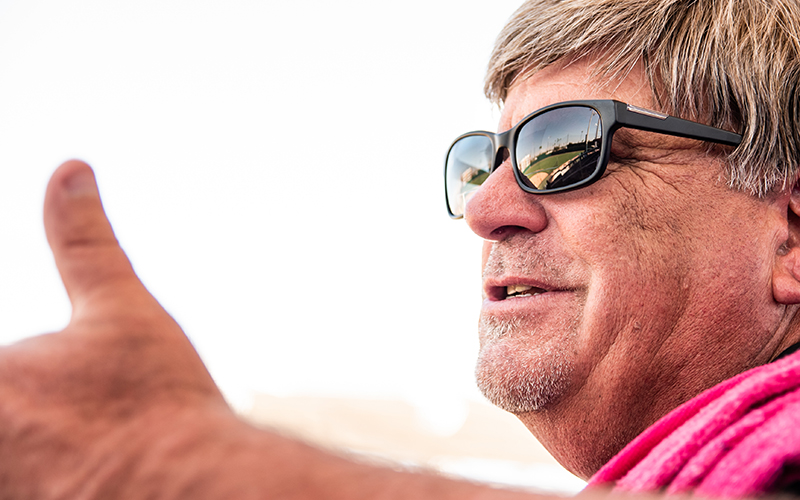 John Kazanas looks for more than physical skills in his role as a baseball scout. He also watches how players respond to adversity. (Photo by Tyler Rittenhouse/Cronkite News)

PHOENIX – In baseball’s version of Oz, where rally monkeys have replaced flying ones, meet a member of the lollipop guild.

If there is a college or high school baseball game somewhere in the West Coast with a potential major league prospect playing in it, chances are good he will be there. He’ll be the guy in the stands sitting on the third base line with a pink towel draped over his left shoulder and a bag of lollipops on the seat next to him.

Baseball scouts travel countless miles to watch games, hoping to find that rare five-plus tool player or a diamond in the rough that might, with some polish, become a gem in their organization. 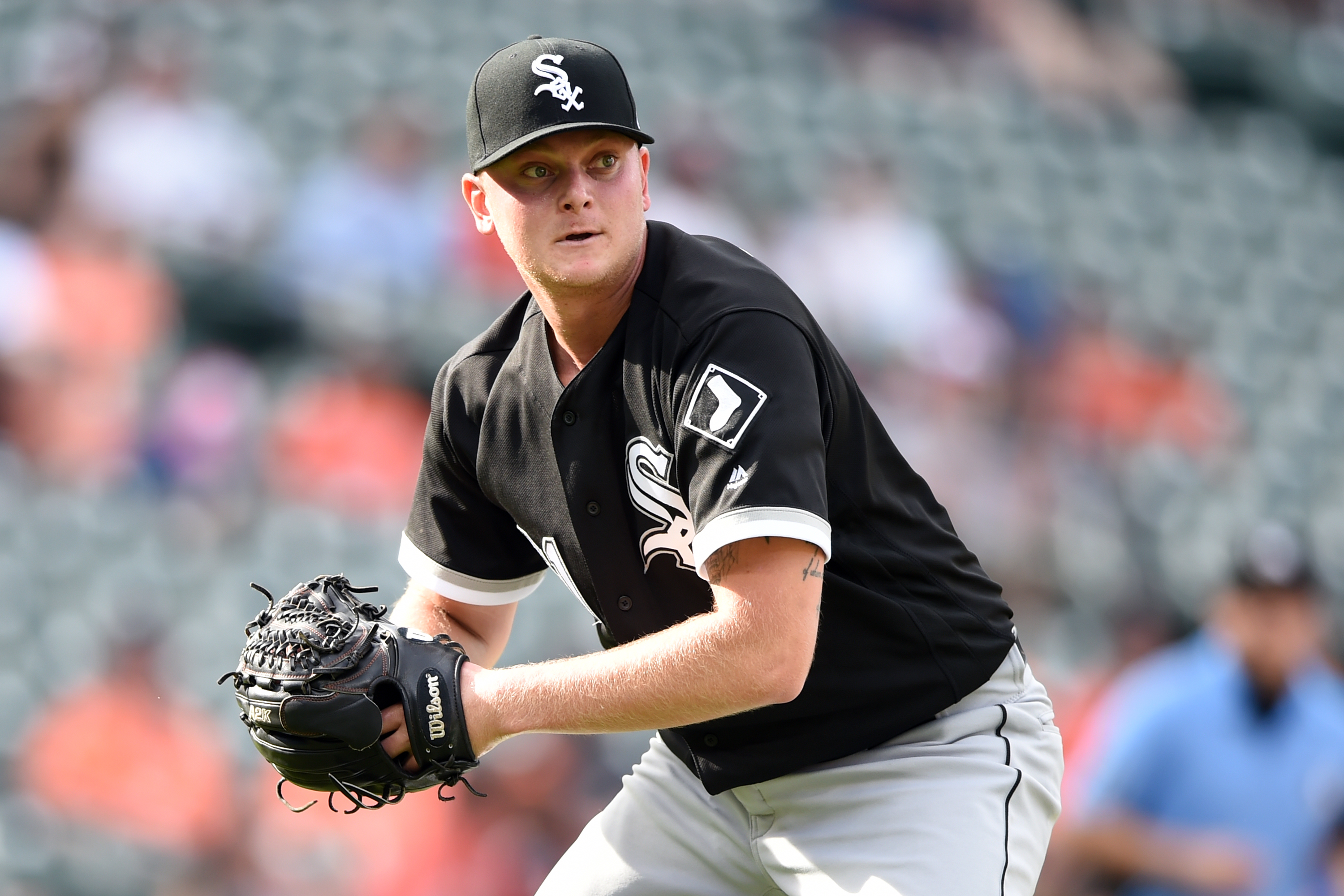 “Tools are tools,” said Kazanas, a Gilbert resident. “You’re throwing the ball, you’re running, you’re hitting. All those things still come into play. It doesn’t make a difference what level. If I can find a kid in tee ball who doesn’t hit the tee and just hits the ball hard, he’s got a chance.”

Scouts are invaluable to teams. The Diamondbacks, for example, employ nearly 100. Major League Baseball has its own scouts as well, suggesting the number in baseball overall surpasses 3,000.

And although improving technology and advanced metrics continue to infiltrate the game, raising questions about the future of scouts, many argue those tools can’t replace good old fashioned eye tests and gut instincts. Where would baseball be, for example, without Tony Lucadello, who, in his 46 years as a scout for the Chicago Cubs and Philadelphia Phillies, signed 52 players, including Hall of Famers Fergie Jenkins and Mike Schmidt.

Identifying players who are the right fit for their ball club’s system and watching them as they progress as professionals is reward enough for Kazanas and New York Yankees professional scout Kendall Carter to make all of the long miles and preparation worthwhile.

Their days vary but Kazanas typically arrives at the ballpark at 10 a.m. for a game that starts at 1 p.m. so that he can see players from both teams stretch, warm-up and take batting and fielding practice.

“I watch them prepare for the game,” he said. “You want to see leadership. You want to see if he takes control of his team, and how he interacts with those around him.”

When the game starts, preseason research and preparation comes in handy. Kazanas narrows down players he thinks stand out and begins his in-game work.

“There are so many different variables, and you try to track them down,” he said. ” When we get to the big league game, it moves fast, you have to read and react.

“I want to see if they have instincts to play the game. You may assume that, because he can run that he can steal a base, but he may not have the instincts to. You just have to evaluate that and use your own eyes and draw your own opinions and conclusions.”

Scout Jon Kazanas
believes traveling is the hardest part of the job. “Get up again, drive, get to a game,” he said. (Photo by Tyler Rittenhouse/Cronkite News)

Regional amateur scouts like Kazana are just one part of a professional baseball team’s scouting machinery. The regional scouts are spread out across the country.

There are national crosscheckers, who are assigned to follow up on players identified as potential high draft picks. And there are professional scouts, whose job it is to keep tabs on players within other organizations to determine how they might fit in potential trades or waiver claims. And there are still more scouts in supervisory roles.

In his two decades in professional baseball, Carter has contributed in all of those scouting roles.

Carter pitched at Arizona State from 1981-84 and tied Craig Swan’s school record for career wins with 47, a record that still stands. He joined the Arizona Diamondbacks in 1996 as an amateur scout.

Later, Carter joined the New York Yankees organization, where he has served in a variety of scouting roles, including work as a crosschecker.

He said national crosscheckers are amateur scouts who, rather than watching every player, evaluate the top talent identified by regional scouts.

“A national guy, he does it the same way but he’s ranking the whole country,” Carter said. “All the players that a national crosschecker sees are normally first- to fifth-round picks.”

Carter said national crosscheckers are diving deeper into every aspect of a player’s game.

“You look for athletic actions, movements, quickness,” he said. “You’re looking at the mechanics of how they throw, how they field, how he swings the bat, pitches, what his arm action and delivery looks like. It’s all mechanical things.”

Of course, there are aspects of the game beyond physical talent that, Kazanas said, can be just as important. He has a trained eye on all of it when he evaluates a player.

“He may be punched out on a bad call, how does he respond?” he said. “Does he carry it out onto the field and make a mistake there because he’s worried about what he did at the plate?”

Kazanas believes that the way a player reacts to failure shows the true makeup.

“Nobody tries to make a mistake,” he said. “The shortstop doesn’t try to throw past the first baseman and two runs scored. The pitcher doesn’t automatically try and give up a home run. Everybody is going to fail. It’s the ones that can forget what they did and come back and show their skills and be consistent (who succeed).” 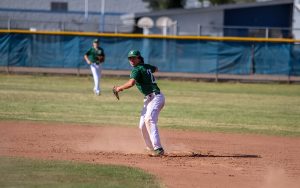 Horizon High School catcher and shortstop Kody Huff impressed scouts at the prestigious Area Code Games in Long Beach, and will have more of a chance to showcase his skills at Stanford. (Photo by John Mendoza/Cronkite News)

Once a game is over, Kazanas is off to his next location. Some days that might be just across town to another part of the Phoenix area. Other days, it can mean traveling to see a player anywhere along the West Coast.

“Traveling is probably the most difficult part of the job,” he said. “It’s hard on your body, then you have to get up and watch a couple of games and get back in your car and drive a couple of hundred miles. Get up again, drive, get to a game.”

Kazanas is in his 30th year as a regional amateur scout in professional baseball, his 27th in the White Sox organization after he took a detour from a coaching career.

After graduating from the University of Missouri-St. Louis, Kazanas joined the school’s baseball staff as an assistant coach and spent seven seasons there before he was hired as head coach at the University of St. Louis.

After just one season at the helm, Kazanas decided in 1984 to make the trek to Arizona to assist at Scottsdale Community College, where his former college coach Fred Nelson was the head coach.

In the fall of 1988, Kazanas connected with Karl Kuehl, head of player development for the Oakland Athletics. Kuehl suggested he put his name in the running for a scouting job.

“(Kuehl) said one day, ‘I think there’s an opening. Would you have any interest?’ and I said, ‘yes’ before he even finished the question,” Kazanas said. “So he passed my name along and I got an interview. They had six or seven other candidates, and I thought I bombed it pretty bad. But about a month later, they offered me the job.”

After being hired, he was thrust immediately into the scouting environment.

“I asked Mike about a manual of what we had to follow,” Kazanas said. “And he was wondering, ‘what for?’ I thought we would have a certain way to do things, and he preceded to say, ‘No, you’re a coach. Go find a player.’ ”

Kazanas believes his background as a coach is the reason the A’s hired him. Recruiting requires the same eye for talent.

“There really isn’t a difference in being a scout and a coach,” he said. “I believe they saw the guys I brought into Scottsdale were good players who got drafted. We had good clubs, so they felt like I had some ability to evaluate.”

As for the lollipops? Those came later.

Kazanas bought them to suck on during the games, but they have become his calling card.

“I give them to players, coaches, scouts, parents and stuff like that. Over time, people had labeled me as the guy with the pink towel and the suckers.”

Scouts — even with lollipops — go mostly unnoticed by casual baseball fans, but they are critical to the game. Prospects don’t always stand out immediately. Their journey often begins when a scout sees something special in them that indicates they might have what it takes to make it in professional baseball.

Sometimes talent is obvious. Sometimes it is just potential that catches a scout’s eye. Either way, it is a painstaking process to determine a player’s upside.

“Early in the year, you are going to break down the entire team and see who draws your attention,” Kazanas said. “From there, you can continue to follow the certain players that interest you and let them prove to you that they can play the game.”

There is no end to the work. Amateur baseball is a year-around endeavor for players, and when they play, scouts have to be there.

Kazanas, who has also done professional scouting for the White Sox, said there is a big difference in the workload between amateur scouts and the heavier demand of scouts on the professional side.

At the professional level, there are a lot of defining factors when you evaluate players,” he said. “That’s why scouts put out hundreds of reports on a small set of players.

“Those reports are important because when you make a trade, you give up something … you better hope you get something back in return.”

Interaction with coaches is another important aspect of a scout’s job. Coaches are usually the first people a scout approaches when they’re zeroing in on players.

Scouts are able to learn more about players on and off the field from coaches, who are always around. Although the scouts might go unnoticed by fans, players know when they’re in attendance and it’s important for scouts like Kazanas to get a feel for how a player works when the scouts aren’t around.

Central Arizona College coach Anthony Gilich said it is important for scouts and coaches to build a relationship.

“The bigger the relationship you build with these guys, the more we trust each other,” he said. “It’s pretty valuable because there are a lot of good players throughout the country, and they need to separate them somehow.”

“The questions they have for me revolve around work ethic (and) what type of teammate they are,” he said. “(If) two players graded out the same, and one has been getting into trouble or doesn’t work hard and do everything you’re looking for, and the other guy does, it’s easier to make a decision.”

“It’s a very fine line because you want what’s best for the kids,” Spence said. “However, (Gilich) understands that it’s a stepping stone for his players. He wants players to grow and go to the next level whether that’s professionally or collegiately.”

Spence said that his advice to players hoping to make a good impression with scouts and play at the next level, is to learn even from bad performances. .

“You hear the cliche, it’s a game of failure, but really it’s just a game of adjustments,” Spence said. “Be in tune to the failure, because when you harness that, a lot of positive can come from it.”

The reward might even be better than a lollipop.