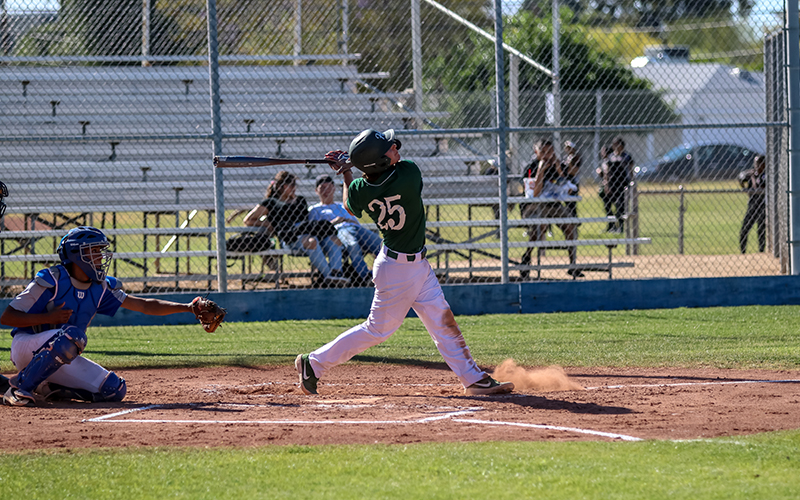 PHOENIX – Maybe someday Kody Huff’s No. 25 will join his father Tim Huff’s No. 14 among the retired numbers at Horizon High School.

The senior catcher and shortstop has left his mark at the baseball powerhouse during a four-year varsity career. But his dreams aren’t done. He is set to play at Stanford next season and pursue a degree in aeronautical engineering.

“I love it that the kid’s a leader in every way you can think of,” Horizon coach Jeff Urlaub said. “He leads by example, but when he has to get on guys, he’s not afraid.

“His preparation resonates in the clubhouse. His leadership is off the charts for an 18-year-old kid. Knowing that his future is going to Stanford and the possibility of being a high round draft pick … to put that stuff aside and just keep getting better everyday and doing the best he can to help the team win speaks volumes.” 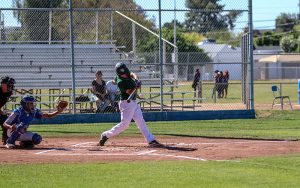 Horizon High School has a history of producing some of the top MLB players and coaches in the country. (Photo by John Mendoza/Cronkite News)

To appreciate Huff is to know how much he values relationships. He put an exclamation point on his career in March when he hit a walk-off, solo home run that lifted the Huskies to a 4-3 victory over Notre Dame Prep.

It was the perfect finish to a night when former Horizon coach Eric Kibler’s No. 1 was added to the list of retired numbers of seven of the school’s greatest players, including the elder Huff, who is now a major league scout for the Boston Red Sox, and former Arizona State coach Tim Esmay.

Huff was Kibler’s last catcher and that is the position he is expected to play at Stanford and beyond, although he also played shortstop and third at Horizon during his career.

Before the Notre Dame game, Kibler threw out the first pitch – to Huff.

Kibler built the program from its beginning in 1980 and led it for 38 seasons and won six state championships and won an Arizona high school-record 808 games.

“I couldn’t think of a better way of honoring him and all he’s done for Horizon the school, and baseball program,” Huff said of his walk-off on the night of Kibler’s jersey retirement ceremony. “He built this field from the ground up, and he’s been a second father to me as long as I can remember.

“He’s done so much for me, I feel that it was a really fitting way to end the night.”

After the game, Huff tweeted a tribute to his former coach.

“Lost in the moment is what this night was supposed to be about. Couldn’t have asked for a more storybook ending to a nigh where alumni, coaches, players, and fans came together to honor the best baseball coach in AZ high school history, Coach Eric Kibler,” it read. 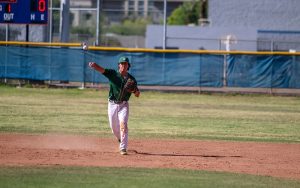 Kody Huff will be attending Stanford next year as a student-athlete majoring in engineering. (Photo by John Mendoza/Cronkite News)

Urlaub, who was an assistant before taking the helm from Kibler, said that Huff is “probably the best player I’ve coached.”

He also said Huff is among the most humble people he has met.

“So I think that makes him unique,” Urlaub said. “He’s never satisfied, and he plays with his heart. He takes everything as if it’s the last time he ever puts on his uniform.

“His preparation and attention to detail … he won’t move on from a drill, or he won’t be satisfied until he gets it right and it becomes second nature.”

Huff is eager to get his college career started and is preparing for it. Stanford has made 16 College World Series appearances, won two national championships and finished second three times. Huff hopes to help keep that tradition going.

“I’m really excited to be there,” he said.

First, though, he will be playing this summer for the Mat-su Miners in the Alaska Baseball League, which attracts many of the top college baseball players. Urlaub is the team’s pitching coach.

“I’m really looking forward to that,” Huff said. “It’s going to help me not just as a player but also a person.”

Baseball is more than just a game for Huff, who said he has forged friendships with players and coaches through the game.

“I love the game of baseball because of the relationships it creates on the field and off the field,” he said. “I’ve made some lifelong friends. It brought me childhood friends, and we’ve been playing the game together for a really long time. I know we’ll be friends for life because of what the games done for us.”

And he believes the sport has taught him life lessons that will benefit him in whatever he does.

“Being an athlete teaches you how to be accountable,” he said. “It has taught me how to hold myself accountable and people around me. I expect a lot of myself when I come to the field everyday, but I try to hold my teammates to the same standard. I want to see them do well and have a high expectation for the people around me.”

“Whether it’s working on the field or (being) the first one in the clubhouse,” Stone said Huff is the team’s leader in everything. “I really believe others look up to him.”