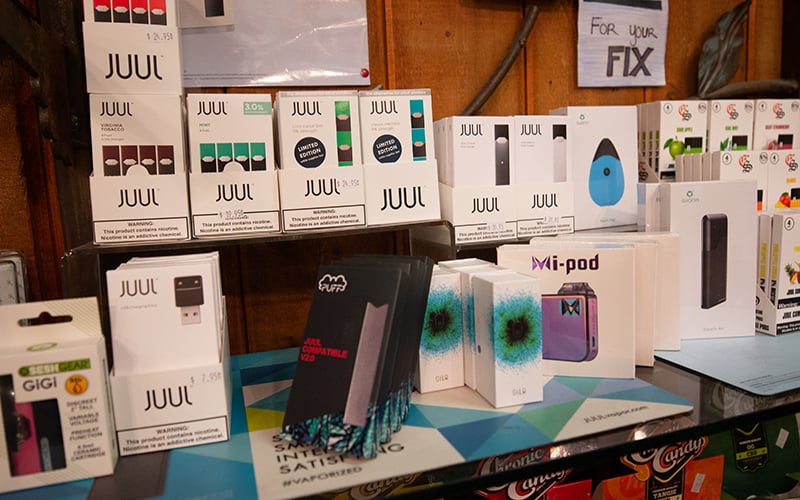 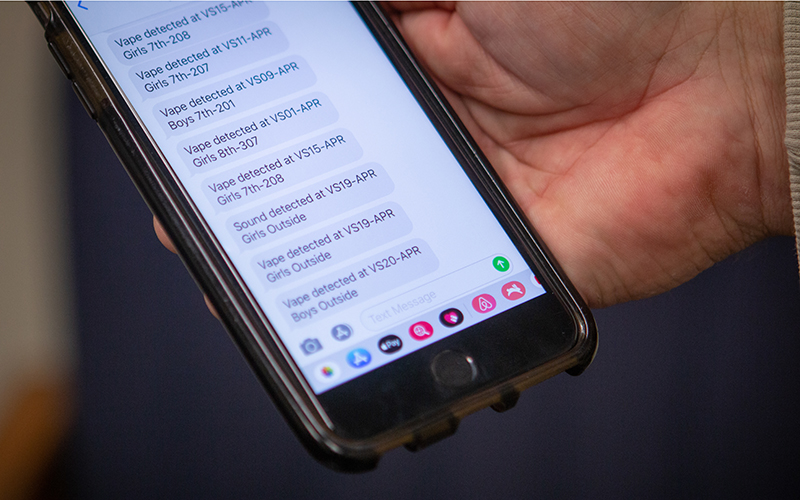 When vapor is detected, school administrators are notified by text. The 20 detectors in Kyrene Aprende, however, are in the calibration process and aren’t always accurate. About 30 alerts are sent each day. (Photo by Delia Johnson/Cronkite News) 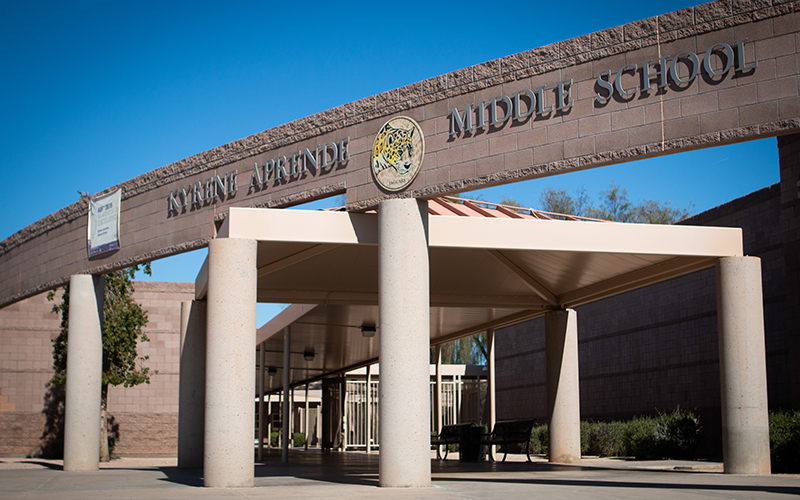 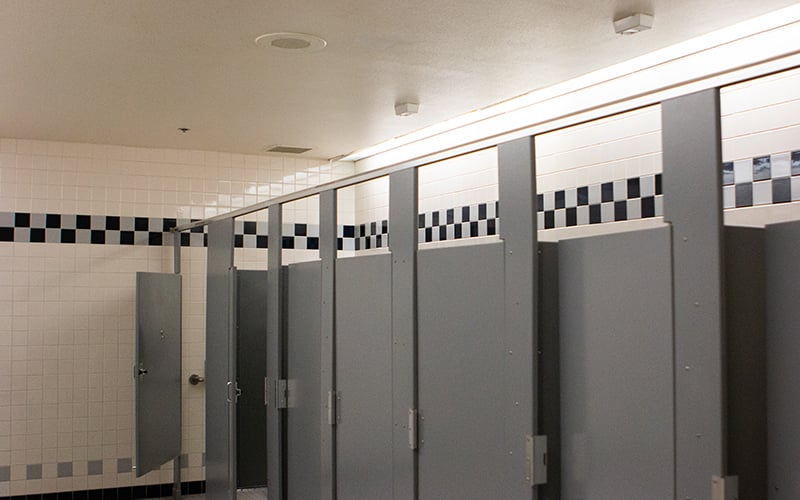 Twenty vape smoke detectors were installed above stalls in Kyrene Aprende Middle School restrooms in February. In addition to such technology, administrators are educating students about the dangers of e-cigarettes. (Photo by Delia Johnson/Cronkite News)

PHOENIX – Jan Vesely, superintendent of the Kyrene School District, asked middle school students in a focus group last year what their biggest concern was. Their answer surprised her.

It wasn’t their friends, course work or teachers.

The students told her how they go all day without using the restroom, fearful they’d encounter other students vaping and worried they would be falsely accused and suspended from school. The superintendent later shared the conversation with a Kyrene principal as they discussed how to handle the escalating problem of e-cigarettes among students.

E-cigarette use rose 78 percent among high school students and 48 percent among middle school students nationwide from 2017 to 2018, according to the Food and Drug Administration. As vaping grows, raising health and addiction concerns, Arizona schools are addressing the problem by installing vape detectors in restrooms and bringing in addiction experts to educate students. Lawmakers, too, are trying to regulate the growing industry.

“It’s definitely a crisis, in the sense that we’re creating a whole new generation of people who are going to be addicted to nicotine,” said Judith Gordon, professor and interim associate dean of research at the University of Arizona’s College of Nursing.

Kyrene Aprende Middle School in Chandler installed 20 vape detectors in seventh and eighth grade restrooms in February, as part of a pilot program for the district. It was the first school in the state to do so, according to Principal Renee Kory, who said Vesely told her of the students’ restroom fears.

“At the start of this year from the very beginning, we were just continually getting reports of kids vaping in the restrooms, and constantly talking to kids,” Kory said. “They were just so nonchalant about how everybody vapes.”

Students primarily use the Juul, she said. The nicotine vaporizer, which is sleek and easy to conceal, is widely sold at convenience stores and smoke shops.

According to the Centers for Disease Control and Prevention, Juul Labs’ sales increased 641 percent from 2016 to 2017, and it held the greatest share of the U.S. e-cigarette market by December 2017.

Juul Labs, a private company, has not released sales reports, but its value has been estimated to be $38 billion.

The vape detectors installed at Aprende come from Soter Technologies, a New York company, and originally were designed as “bullying detectors” – monitoring noise in private spaces, such as restrooms and locker rooms.

With the new detectors, Aprende administrators plan to combat both the easy concealment and increasing normalcy of vape devices. But it’s not yet clear whether such technology is a solution.

The rise of e-cigarette in schools

Arizona schools only have partial data on the growing trend, but officials see it as a rising culture among youth that many adults don’t fully grasp.

In an Arizona Criminal Justice Commission youth survey last year, 20 percent of young people reported e-cigarette use in the past 30 days – a rate that has increased across all grade levels since its first assessment in 2016.

School officials at several districts around metro Phoenix say it’s unlikely they’ll resort to installing detectors. A spokeswoman for Dysart Unified School District, which serves elementary, middle and high schools in El Mirage and Surprise, said it would cost too much and students could find a way around it.

“Our K-8 schools have a minimum of 12 bathrooms, and our high schools have upwards of 40 bathrooms, so having those devices would not be feasible,” said Karen Winterstein, director of student services for Dysart.

She said the district’s main concern is dispelling misinformation around vapes, often marketed as cessation devices to help wean people off cigarettes, although the FDA does not recognize that claim.

“In the interactions our administrators had with students and parents, we could tell parents didn’t understand” vaping devices, including how cleverly they can be concealed, Winterstein said. “Some look like key fobs, lipsticks, asthma inhalers.”

In January, a spokeswoman from the Arizona Attorney General’s tobacco enforcement unit held an informational session for Dysart parents, students and community members to help identify vape devices and learn about health risks.

Winterstein plans to take the presentation to assemblies at every school in the district.

“We’re trying really hard on creating interventions, and not just being punitive,” she said.

Steven Chestnut, executive director of support services for the Scottsdale Unified School District, said they also have been educating students during assemblies this year. Chestnut said the district may consider installing detectors, although there are no current plans to do so.

Administrators at Aprende Middle School in Chandler concede that the detectors are just one part of a package that must include prevention.

“It’s not about the ‘gotcha’ with the kid,” said Carl Nasuta, assistant principal. “We want it to deter them. We don’t want them to come here and vape, but if we’re not connecting the educational piece with the detectors, then we’re really not educating the students and families on how serious this could be.”

At risk of lifelong nicotine addiction

Gordon, at the University of Arizona, said teenage brains are at a high risk of developing lifelong nicotine addiction.

“What we’re finding is that the earlier you start using nicotine and the more changes you make in your brain, the harder it becomes later on to quit, because your brain can’t adapt back to what it would’ve been like,” said Gordon, who also is a clinical psychologist who has researched tobacco and nicotine addiction for about 25 years.

Nearly 90 percent of adult smokers began smoking before 18, according to the U.S. Department of Health and Human Services. That has happened even as cigarette smoking among high school students markedly declined over two decades, according to government reports.

“We’ve been making really phenomenal progress over the last few decades to get kids off nicotine and not start smoking,” Gordon said. “Until two years ago, we had been making incredible progress and were at an all-time low of nicotine addiction.”

Gordon said the other primary concern from the medical community is a lack of long-term studies on vaping.

Decades of research have found cigarette smokers at risk of developing lung cancer and lung and heart diseases, according to the CDC. Heating and inhaling anything other than oxygen can irritate the lungs, Gordon said of vaping’s short-term effects.

Gordon is working to develop an online nicotine-prevention program using games to educate fifth and sixth graders about the dangers of e-cigarettes, and hopes to have it tested at Tucson and Oregon schools in the fall.

As vaping becomes more popular and addiction increases, she said, the government may start to regulate the devices the same way it did with cigarettes, although that will take time.

Two vaping bills were introduced by Arizona lawmakers, including Senate Bill 1009, which would reclassify all e-cigarettes and vaping products as tobacco products, further clarifying prior legislation regarded as unclear in terms of what products can be sold to those younger than 18. The bill cleared the Senate and is awaiting action by the House.

House Bill 2024, which never made it out of committee, would have expanded existing rules to combat secondhand smoke in public places, such as schools, offices, restaurants and stores, to include vape fumes along with cigarette smoke.

Nationally, FDA Commissioner Scott Gottlieb was cracking down on teenage vaping before he resigned last week, so agency plans are unclear.

Tools, resources to fend off e-cigarettes

Although the vaping industry is still in its infancy, such entrepreneurs as Derek Peterson of Soter Technologies see an untapped market in curbing teen use. Soter markets itself as the first vape-detector company, said Peterson, who’s trying to patent it. The devices monitor noise and air quality and send administrators silent alerts via text.

Aprende paid about $17,000 for its 20 detectors, district spokesperson Erin Helm said. But the devices are still in a calibration phase, according to Nasuta, assistant principal. He said he averages 30 text alerts from the devices a day – many of which he believes to be false alarms.

Winterstein in the Dysart district said students likely will find a way around the devices.

“Unfortunately, our students have become very adept at hiding the vapor,” she said. “They’ll blow it in their sleeve or elbow.”

Rather than new technology, most districts are harnessing an industry of addiction experts and community leaders to deliver messages at student assemblies.

Stephanie Siete, a substance-abuse expert from Community Bridges, spoke to parents and others in the local community at Kyrene Akimel A-al Middle School at a February presentation after nine vapes were confiscated in one day.

She delivered a similar presentation, featuring graphic images of facial injuries caused by exploding vape devices, to Aprende students at an assembly. She’s also spoken to other schools around the Valley about vaping, she said.

Joranda Montaño, executive director of Not My Kid, a non-profit aimed at educating youth, families and communities about substance abuse and a range of other issues said adults are developing a sense of urgency around vaping.

“We do prevention education, and vaping is our most popular topic right now, she said. “It’s become our most requested presentation.”

Still, she said, parents should keep in mind that vaping may be new but educating young people about health risks has endured for generations.

“Kids have not changed. The experiences have changed,” she said. “The biggest thing they’re concerned about is getting in trouble.”