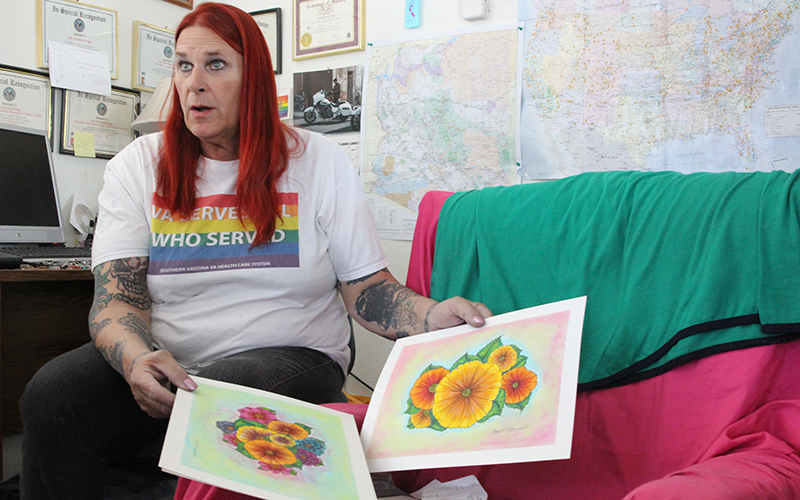 Sue McConnell presents some of her art work at her home in Tucson. At the Tucson VA where she volunteers, McConnell has won several awards for her expressive drawings. (Photo by Nicole Ludden/Cronkite News) 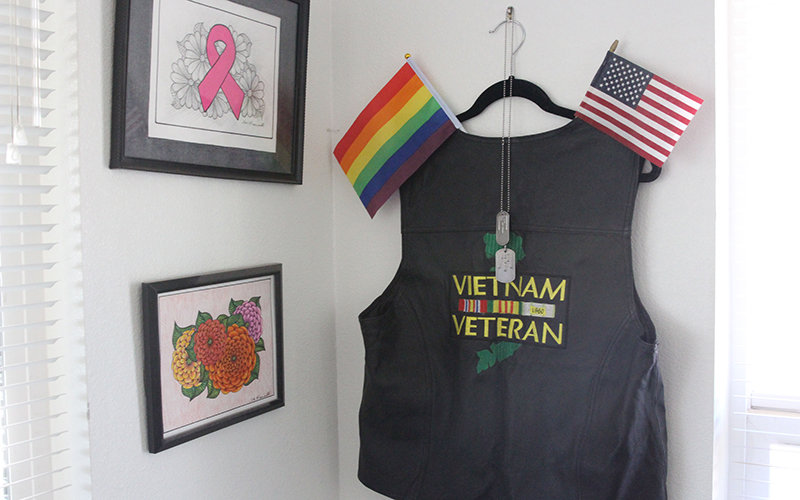 The walls of Sue McConnell’s home reflect her identity as both a proud Navy veteran and transgender woman. “Most people call me ma’am now. … It’s very gratifying to be recognized as female,” she says. (Photo by Nicole Ludden/Cronkite News)

In 2012, she stood in a small county courthouse in Kelso, Washington, with other people seeking to change their legal names.

After hearing their individual cases, the judge dismissed the group and a clerk came out with a stack of legal documents containing their new identities. McConnell was the last person to receive papers.

“Read this over and make sure it’s all correct,” the clerk instructed.

Sue McConnell gazed down to the paper in her hands, a mirror in bold letters reflecting back to her the truth of who she is.

As a wave of relief rushed over McConnell as she declared to herself, “I’m finally me.”

McConnell, 66, spent part of her life hiding from who she now identifies as: a woman.

McConnell joined the Navy at 17, serving as a boiler technician on an ammunition ship off Vietnam.

At the time, she identified as a man.

However, McConnell’s female identity persisted even though the times were condemning of sexual identity issues in general, she said.

“It was frustrating, and I was really fearful that someone would find out,” McConnell said. “You couldn’t even be gay.”

Transgender rights have progressed considerably since McConnell was in the Navy. In June 2016, a directive from the Obama administration permitted transgender individuals to openly serve in the U.S. military.

However, a Jan. 22 Supreme Court ruling is considered a major setback for McConnell and other transgender advocates, as well as a hindrance to the future of transgender individuals in the military.

The Justices voted 5-4 on the issue, suspending lower courts’ rulings that temporarily sidelined the policy’s implementation.

“It’s devastating, because we make this progress, then all the sudden get kicked back,” McConnell said. “We all have capabilities. If you’re a transwoman or transman, it doesn’t make any difference because you have those same abilities.”

The Department of Defense is inching closer to implementing changes to its transgender policy; it’s awaiting a decision by a U.S. District Court in Maryland.

As the director of programs for the Southern Arizona Gender Alliance (SAGA), a nonprofit that provides support in many forms for non-gender conforming individuals, Erin Russ finds herself particularly close to the issue of barring transgender people from serving in the military.

Russ, like McConnell, is a transgender veteran. She served as a captain in the Army while struggling with her gender identity.

“When Uncle Sam discovered I preferred cashmere and heels off-duty, that was the end of my career,” Russ said.

One Saturday night during her military service, Russ says she was issued a traffic citation. The police officer noticed she was dressed in women’s clothing and reported her to the military base. By Monday morning, Russ was relieved of her command.

Russ considers the Supreme Court’s ruling an insult to military members who served their country regardless of their sexual orientation.

“I am who I am, I’ve served my country. I would have continued to serve my country if it hadn’t been for a bias against transgender people,” Russ said. “Those who are serving now are serving with honor and should be allowed to continue to serve their country if they choose to.” 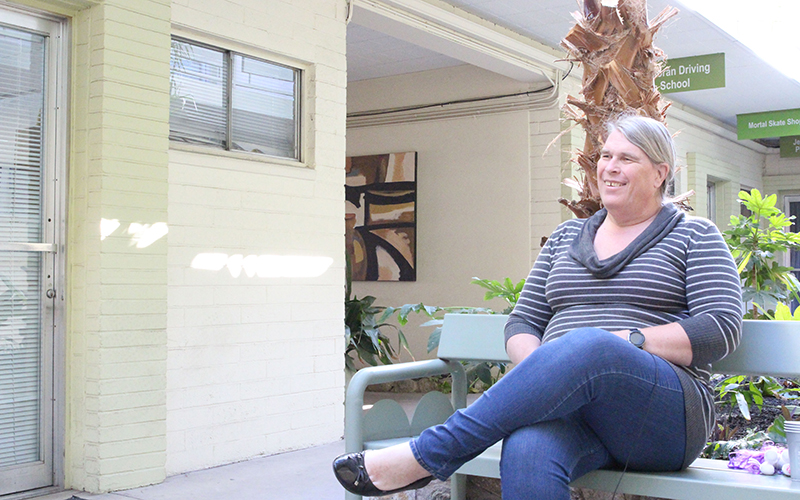 Erin Russ is a transgender Army veteran who says she was discharged from service after military officials discovered her dressing in women’s clothing. Russ now is a full-time transgender advocate for the Southern Arizona Gender Alliance, which has provided guidance for transgender people since 1998. (Photo by Nicole Ludden/Cronkite News)

The Department of Defense asserts their policy change is not a ban on transgender individuals.

“As always, we treat all transgender persons with respect and dignity,” Pentagon spokeswoman and Air Force Lt. Col. Carla Gleason said in a press release. “DOD’s proposed policy is not a ban on service by transgender persons. It is critical that DOD be permitted to implement personnel policies that it determines are necessary to ensure the most lethal and combat-effective fighting force in the world.”

While the administration asserts their new policy is not a ban, they do not specify what it is instead.

Aaron Belkin is a founding director of the Palm Center based in San Francisco, an independent research institute that has studied issues of inclusivity in the military for 20 years. He said the transgender ban is harmful not only to those it excludes from service, but to the stability of the U.S. military.

“We know from previous experiences, when banning transgender troops was military policy, that these bans take a toll on those serving under the ban,” Belkin said. “Any military leader will tell you that one of the keys to good order and discipline is to have a certain set of standards that applies equally to everybody, and a certain set of standards for one group of troops compromises readiness.”

Trump tweeted about his proposed ban in July 2017, saying transgender persons will no longer be allowed to serve in the U.S. military because they cause “tremendous medical costs and disruptions” to the military.

After consultation with my Generals and military experts, please be advised that the United States Government will not accept or allow……

….Transgender individuals to serve in any capacity in the U.S. Military. Our military must be focused on decisive and overwhelming…..

….victory and cannot be burdened with the tremendous medical costs and disruption that transgender in the military would entail. Thank you

In March 2018, the Trump administration proposed specific restrictions of transgender individuals in the military in a 44-page report written by then-Secretary of Defense Jim Mattis.

The report states that “Transgender persons who require or have undergone gender transition are disqualified from military service.”

Mattis also writes, “a policy that permits a change of gender without requiring any biological changes risks creating unfairness, or perceptions thereof, that could adversely affect unit cohesion and good order and discipline.”

The possible implementation of these changes alarm Russ and other transgender activists.

“Most people see that we are just like everybody else,” she said. “But right now, the people who have the loudest mouths and who are the biggest bullies are picking on us because they’re so few of us, or at least they think that. We are going to have to beat back the darkness for a while, but momentum is in our favor if we don’t give up.”

A long road to healing

As a Vietnam veteran and transgender woman, McConnell uses her experiences as a volunteer with the Tucson Veterans Administration. While all VA clinics offer specialized medical services to trans veterans, there are only a handful of stand alone clinics, which include Tucson and Cleveland.

McConnell has volunteered at the Tucson VA for five years. While she has found guidance from fellow transgender veterans, McConnell’s journey was riddled with obstacles in the cross hairs of her military service and conflicting self-identity.

While she identified as a man in the Navy, McConnell was plagued by mental health issues. She was honorably discharged 1972 at age 20.

The day before she was discharged, McConnell was sexually assaulted.

“I was attacked by six men. I was raped, beaten and left for dead,” she recalled.

McConnell didn’t report the assault out of embarrassment, reasoning, “I thought I should have been able to take care of myself.”

Still struggling with her sexual identity, McConnell was left to manage an extremely traumatic experience on her own.

“It was debilitating. I didn’t know what to do. I couldn’t talk to anybody,” McConnell said. “I couldn’t tell anyone I got attacked and raped, let alone tell somebody who I was.”

McConnell experienced extreme emotional distress upon entering civilian life and never got help until her life depended on it.

One day on the Chehalis River Bridge in Washington, McConnell stood with a cinderblock and rope. She began to make her peace with the world.

But when she looked down at the river she believed would end her life, the tide went out.

“I figured I’d be stuck in the mud, holding a cinder block that I stole from Stauffer’s Lumber and now I’m going to go to jail because I stole a brick,” McConnell said.

A friend took her to the nearest VA hospital, where she acknowledged to a doctor that she had tried to kill herself and would do so again if given the chance. McConnell was diagnosed with PTSD, which she credits to a manifestation of the tragic events that unfolded during her military career.

After initial treatment, adopting her identity as a woman was a gradual process.

“I started feminizing a little bit, and I cleaned my face off. I started using a little eyeliner,” McConnell said. “Some of the girls noticed, and one day I just came out.”

After embracing her identity as Sue, McConnell moved to Tucson in her motorhome. She barely made it out of Washington when her trailer caught fire and was destroyed.

“I unhooked my trailer with my bike in it and pushed it about 50 feet up the road,” she said. “I lost everything.”

All she had on her was a pair of sweatpants, a T-shirt, a bra and tennis shoes. When she arrived in Tucson, McConnell began her life from a blank slate. 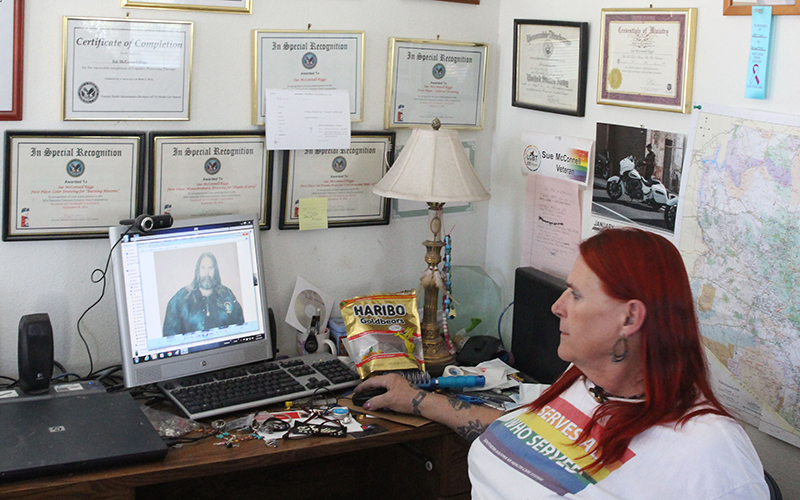 Sue McConnell, a transgender Vietnam veteran, gazes at her old yearbook picture. Although the photo is from a time when she identified as a man, McConnell said, “I see a woman, I see a girl.” (Photo by Nicole Ludden/Cronkite News)

“Coming down here, nobody ever knew me besides who I am now,” McConnell said. “Before I moved down here, transgender support wasn’t available.”

As a veteran representative at the Tucson VA, McConnell has learned to love herself, even in a political climate that discourages her very existence as a transgender veteran.

“You go through a lot of denial of who you are, trying to pretend that you’re not who you are. When you really realize who you are and you embrace that. … That’s not easy to do,” McConnell said. “One day I looked in the mirror and I said, ‘Sue, you are beautiful.'”

McConnell’s skin is covered with tattoos from different periods of her life. Each patch and array of faded colors represents a part of who she is.

Long before she came out as Sue, and long before she received a piece of paper confirming this identity, McConnell tattooed a winged woman on her leg that only she could see.

“I was that winged woman and I was spreading my wings and I was flying,” McConnell said. “That was my symbol of freedom of who I was. Of who I am.”

As she continues to live confidently in her identity as a transgender veteran, McConnell hopes for a world that allows others to do the same.

“We serve all who have served. It doesn’t make any difference if you’re red, yellow, green, brown. If you’re gay, lesbian, a trans woman or a trans man,” she said. “You served your country and you deserve to be treated fairly.”