As many as 212,000 former felons in Arizona have lost their voting rights as a result of their convictions, according to a recent study – even though for many, getting the right restored could be as simple as registering to vote. (File photo by Jenna Aronson/Cronkite News)

WASHINGTON – Tucson resident Danny Howe made sure to vote in this election – because Howe knows what it’s like to have that right taken away.

“Most people just don’t know,” Howe said. “Once you’ve been convicted of a felony you’re a felon your whole life.”

Howe is one of the lucky ones, a former convict who was able to get his right to vote restored. But there were hundreds of thousands of Arizonans who were not able to cast a ballot this year because of a felony conviction, even though the process of getting voting rights restored in Arizona is within reach.

According to 2016 data from the Sentencing Project, Arizona had 221,170 individuals who had been disenfranchised due to felony convictions, the ninth-highest number in the country and the eighth-highest as a percent of the state’s voting-age population.

The Sentencing Project grouped Arizona with 11 other states that will restore voting rights once felons have served their time and any parole and probation, and paid any fines and restitution. States in this category had some of the highest numbers of voters disenfrachised due to felony convictions.

Other states have some combination of those requirements. On the other end of the spectrum are Vermont and Maine where felons never lose their right to vote and can vote from prison.

“We’re obviously better than some states and probably not as good as others, though I can’t say exactly where in that spectrum we would fall,” said Andy Silverman, a University of Arizona law professor who runs a clinic to assist felons through the process of getting their voting rights back.

Silverman used Florida as an example of a particularly harsh state, and it had the highest number and percentage of disenfranchised felons, according to the Sentencing Project. But voters in Florida approved a ballot initiative Tuesday that will automatically restore voting rights for felons, excluding those convicted of murder or sex crimes.

Arizona automatically restores the civil rights, outside the right to bear arms, of individuals with one felony conviction once they have served their sentence, parole, probation and paid all fines and/or restitution. Those with more than one felony conviction must appeal to the court in which they were convicted to regain their rights after completing their post-prison punishments. 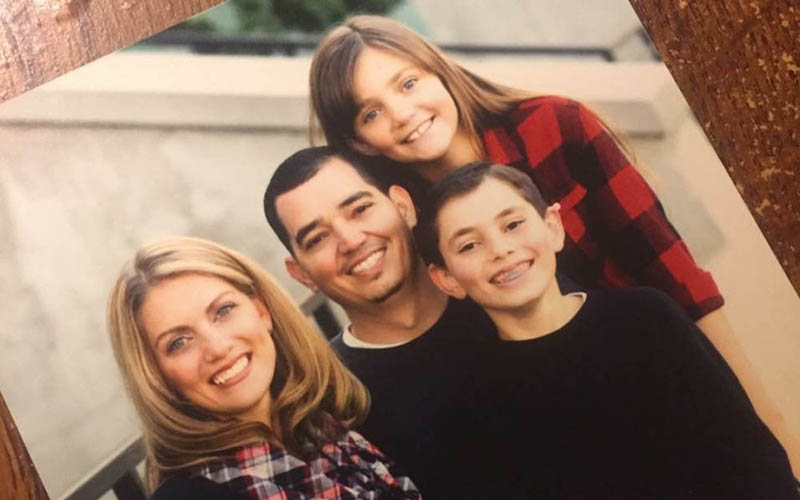 Danny Howe, with wife, Jessica, and children Emilee and Aidan, has turned his life around after a felony conviction as a teen, an incident that he said should not prevent him from being a productive – and voting – member of the community for the rest of his life. (Photo courtesy Danny Howe)

But few former inmates know they can register to vote again once they have done their time and paid their debts.

“I get plenty of calls from people with one felony conviction who have their rights back but didn’t know about it,” Silverman said. “I don’t think the prison really tells them.”

Victor Cervantes and Hannah Recht spent several months in Arizona this fall trying to educate felons about their rights. The two worked with the Restore Your Vote Campaign, a project of the Campaign Legal Center, using phone lists from other civic and voting rights groups to reach out to hundreds of former inmates.

Recht reached 475 people in Tucson while Cervantes contacted 308 people in his native Phoenix, most of whom were still on probation or owed fines or restitution. But Recht said she called 70 people who had only one conviction and was able to assist them with information about registering to vote.

For Michele Keller, it took an assist from Silverman’s program to get her voting rights back.

Keller was in and out of prison for more than eight years from 1997 through 2007 on drug-related charges. After completing parole in 2008, she was directed to Silverman’s clinic, which was able to help her get two of her three felony convictions set aside.

Despite still owing court fees, but not fines or restitution, she was able to regain her voting rights and registered to vote for the first time in her life for the 2014 midterms. Keller – who now works at a program that offers counseling for mentally ill patients through the University of Arizona and is a mother of two and foster mother of three – said she wishes the process was easier.

“I feel that that is just really wrong that we have to pay money to get our rights back,” Keller said. “As soon as they give you your discharge papers they should give you voting papers and explain the process to you.”

Convicted at 19 of a drive-by shooting, he entered prison in 2003 and was released in 2006 on parole, which he completed a year later. He worked
menial dishwasher and construction jobs before a 2010 marijuana posession charge landed him on probation.

But after completing probation a year and a half early, in December 2011, Howe began to look into ways to clean up his record, and he came across Silverman’s clinic. With their direction, Howe got his charges set aside after obtaining an absolute discharge, restoring all civil rights he had lost.

Howe, who works for Pima County and runs a company that operates halfway houses, said he has voted in every election from 2014 on. He said former felons should be able to have their voting rights restored, saying the mistakes they made in the past should not define them for life.

“I surfed a few times but wouldn’t describe myself as a surfer,” Howe said.

“Regardless of how many things you’ve committed, I think you should still have a say-so in your community,” he said.