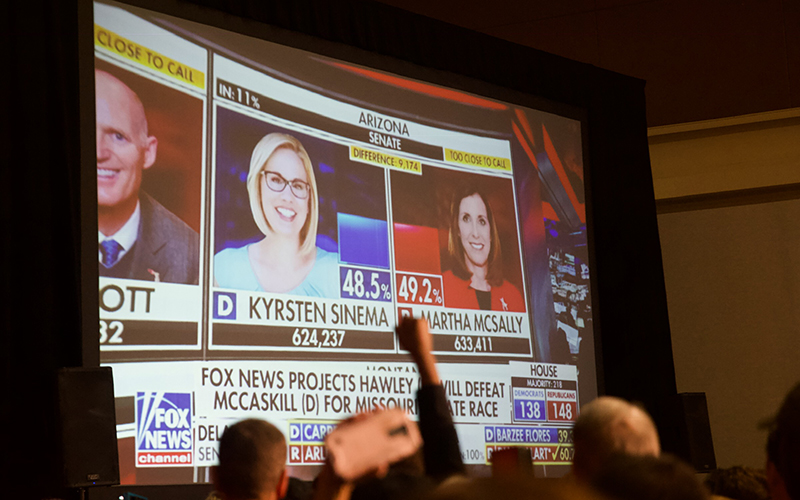 The crowd at the Republican watch party in Scottsdale cheers as early results show Martha McSally with a slight lead over Kyrsten Sinema in the U.S. Senate race. (Photo by Anya Magnuson/Cronkite News)

The results were preliminary, based on a count of early voters with the vast majority of votes yet to be counted, but the nail-biting trend continued as votes trickled in.

He says Sinema has spent millions of dollars on campaign signs misrepresenting who she is.

“If you look at her posters that she uses she’s masquerading as this ‘moderate’ when she’s not,” Schiff said.

With the race so close, Schiff worries but refuses to give up.

“It gives me a little bit of anxiety but…I’m going to fight for the principles I believe in regardless of the circumstances,” Schiff said.

Kari Dolan of Phoenix, a McSally supporter at a GOP watch party in Scottsdale, said McSally has “been in really tight races before and she’s won.”

Sinema supporter David Sears stood alone toward the back of the Democratic watch party at a downtown Phoenix hotel. Donning a Kyrsten Sinema sticker and sipping a drink, he intently watched the election coverage being projected onscreen.

Sears isn’t from Arizona and he doesn’t know anyone here. He is a physician in San Francisco, but disagreements with the Trump administration and a strong connection to the messages from the Sinema campaign led him here.

“This is our first chance to say something and put some reins on the really unpleasant changes in the country,” he said.

Sears started with phone calls and text messages. He has two children and said it was not easy to schedule time to text and call for the Sinema campaign, but he felt it was important. He coordinated with family so he could fly to Arizona for the five days leading up to the election. He knocked on what he estimated to be 800 doors and worked in Sinema’s campaign office calling voters and encouraging them to support the candidate.

“It’s extraordinarily close,” Sears said. “There’s going to be a lot of anxiety until we know the results. It’s good to see all of this energy.”

By 11 p.m., neither Sinema nor McSally had spoken at their respective watch parties, so supporters headed out. Most of the state results had yet to be counted.

McSally, who was endorsed by President Donald Trump, and the more centrist Sinema tussled in a state that traditionally leans Republican, drawing national attention not only to a rarity in the U.S. Senate – 23 of the 100 senators are women – but to the shades of differences between the two candidates and what the results could mean for party control of the Senate.

McSally, meeting with potential voters Tuesday at Chase’s Diner in Chandler, stressed her record as a military veteran and politician.

“I paved the way for women and girls by being the first woman to fly in combat,” McSally said. “I’m going to D.C. in order to continue to fight for America and Arizona because I care so deeply about us.”

Sinema said she is an independent thinker whose political views evolved as she served the state over three terms in Congress. Greeting voters outside the Burton Barr Central Library in Phoenix a few hours before the polls closed Tuesday, Sinema spoke confidently about her chances.

“Arizonans are very independent people, so they don’t care very much about party labels,” she said. “What they’re looking for is someone who understands the challenges they go through.”

The new senator will replace outgoing Sen. Jeff Flake, the two-term Arizona Republican who made headlines sparring with President Donald Trump. Flake announced his retirement in October 2017, setting off a three-candidate Republican primary to replace him.

Arizona, which has not had a Democratic senator since Dennis DeConcini retired in 1995, is considered a key state in determining the power balance of the Senate until the general election in 2020.

Arizona has never had a female senator, but four governors in the state’s history were women – the most women in the governor’s mansion of any state.

McSally faced former Maricopa County Sheriff Joe Arpaio and Kelli Ward, a former state senator from Lake Havasu City in the primary election and was generally considered the most electable of the Republican candidates vying for the Senate seat.

Sinema was expected to benefit from a last-minute bump in the polls after Green Party candidate Angela Green dropped out of the race Thursday and endorsed Sinema, citing the deep pockets of the major party candidates.

Green said in an interview Thursday with KPNX she was throwing her support to Sinema because her campaign most closely aligned with what she thought would make “a better Arizona.”

The Arizona Senate race was one of the costliest in state history, according to campaign finance reports.

Sinema had spent more than $20 million throughout her campaign, while McSally burned through about $13.5 million through the end of September, when the filing deadline for campaign fundraising closed.

Those figures do not include the millions spent by outside groups. The Center for Responsive Politics said that number topped $33 million by mid-October. 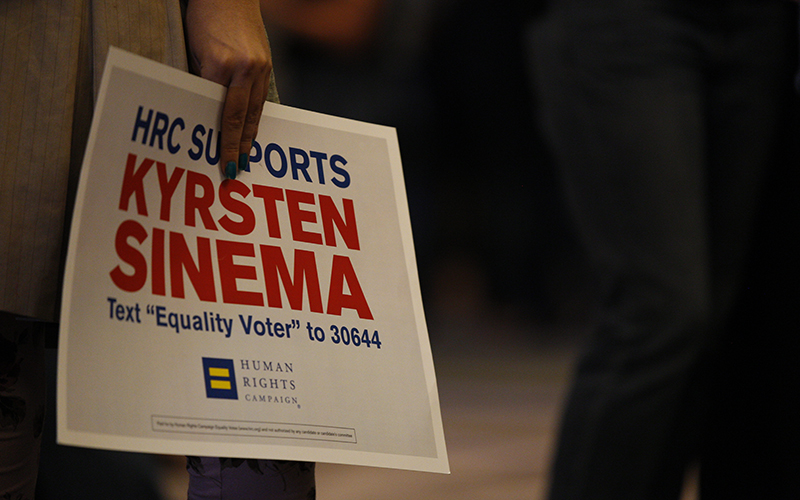 Democrats at their watch party in Phoenix remained upbeat after 10 p.m., as the U.S. Senate seat remained a toss up between Kyrsten Sinema and Martha McSally. (Photo by Daisy Finch/Cronkite News)

The contentious campaign was roiled in political ads – one brought up Sinema wearing a pink tutu years ago in a protest – and sharp words, with McSally supporters calling Sinema a liberal in a moderate’s clothing and Sinema accusing her Republican opponent of using unscrupulous tactics and baseless lies to win.

In the waning minutes of the only public debate between the two candidates, McSally accused Simena of treason, based on comments Simena made in a radio interview about the Taliban during the first year of the Iraq War. Sinema called the claim ridiculous.

Arizona State University Professor Peter Van Cleave told Cronkite News in October that the term was not being used in a legal way – treason is defined in the Constitution as an act of war against the U.S. or conspiring with the country’s enemies and is punishable by death – but as a moral argument.

“It’s another political descriptor of trying to frame your opponent in a specific light,” Van Cleave said.

Sinema, a three-term representative, is the first openly bisexual person to serve in Congress. During her 2018 campaign, she painted herself as an independent who can represent a conservative state and work across the aisle. McSally and other Republicans attacked her for what they said is her liberal agenda.

Sinema worked to sway voters with her record on health care, vowing to protect people with pre-existing conditions. She emphasized the necessity of Medicare and Social Security, and she said she would fight any plan to make cuts to those programs.

McSally, a two-term Congresswoman who resigned as a representative from Tucson to run for Senate, had capitalized since the August primary on Trump’s backing. The president stumped for McSally in Mesa in October.

The Republican focused her campaign on military spending and border security, drawing on her experience as a 22-year Air Force veteran. She distanced herself during the campaign from softer immigration stances such as a pathway to citizenship for DACA recipients and promised to help fund Trump’s border wall.