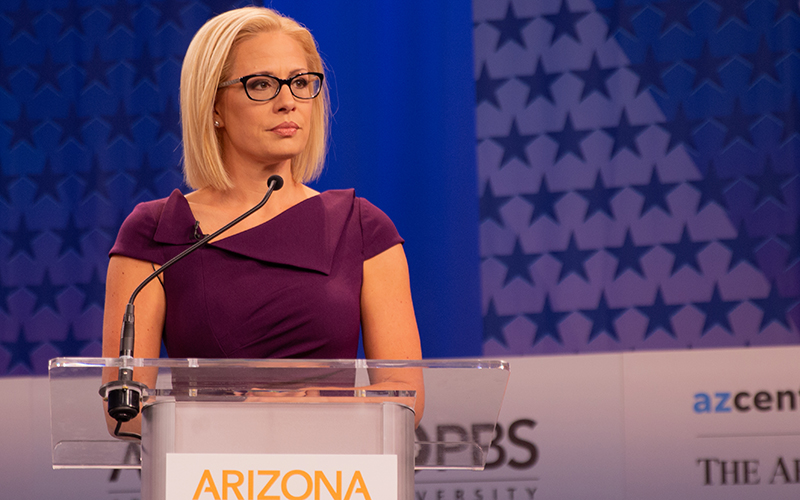 Rep. Kyrsten Sinema, D-Phoenix, has served three terms in the U.S. House of Representatives. She used the debate to portray herself as an independent, echoing the campaign ads supporting her candidacy. (Photo by Chris McCrory/Cronkite News) 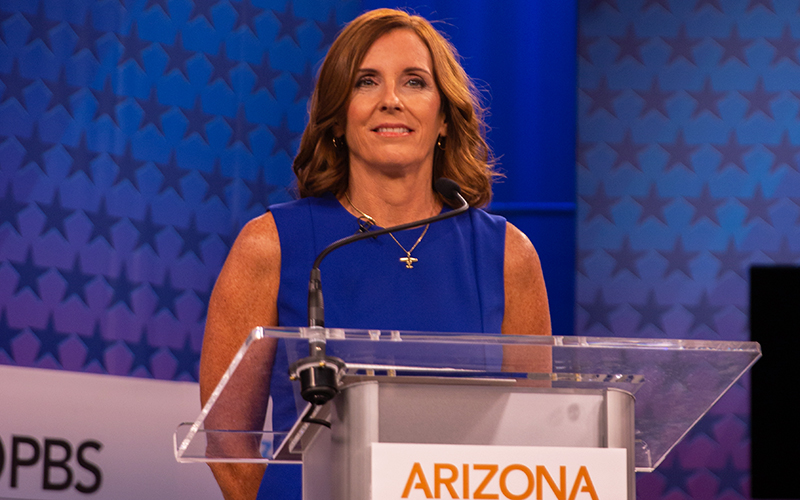 Rep. Martha McSally, R-Tucson, has served two terms in the U.S. House of Representatives. She spent much of the debate on the attack, fighting against both her opponent and the moderators. (Photo by Chris McCrory/Cronkite News)

PHOENIX – In a debate peppered with accusations of lying and treason, U.S. Senate candidates Martha McSally and Kyrsten Sinema took shots at each other Monday in their only public debate of the 2018 election, each calling out the other’s voting record as proof that the other candidate is not a true representative of Arizona.

Sinema used the debate, which was broadcast live on Arizona PBS, to portray herself as an independent, echoing the campaign ads supporting her candidacy. She painted herself as someone willing to step over party lines, embracing the fact that she had voted largely with President Donald Trump’s agenda since 2017.

“Over the past six years, I’m proud to say I’ve taken the time to learn and grow and occasionally even change my opinion,” said Sinema, who has served three terms in Congress. “Over time, I think it makes sense for individuals, who are willing, to learn and to grow.”

On other issues, she attempted to downplay that some of her positions are Democratic, pointing them out as good for Arizona. She referenced the price of beer cans when saying she opposed the Trump administration’s tariffs on aluminum imports because they hurt the state’s people.

“That’s something I think we should all agree on, that beer shouldn’t cost more,” she said.

Sinema attacked McSally for being unscrupulous during her campaign, saying the two-term Republican congresswoman was willing to do anything to be elected. Asked whether she believed McSally was serious about not wanting to change Medicare to a voucher program, Sinema said it was hard to believe anything McSally said.

“I think this is just a pattern that we’ve seen through this campaign, unfortunately, that Martha has changed her opinions very rapidly when she decided to run for United States Senate and has shown that she is willing to say and do anything to get elected,” Sinema said.

McSally spent much of the debate on the attack, fighting against both her opponent and the moderators – “Arizona Horizon” host Ted Simons and Arizona Republic/azcentral.com reporter Maria Polletta. Answering the first question about her relationship with Trump, McSally said she took offense to the idea that she had been a critic during the 2016 campaign.

“I never endorsed anyone for anything, whether president or dog catcher, and I just continued with that path,” she said. “But he’s now in office and is the president of the United States and we have this historic opportunity to move America in a new direction.”

She defended White House policy, including the separation of undocumented children from their parents at the southern border, saying the administration’s hands were tied by the law.

“The law in the books is to enforce the law,” McSally said.

As the debate weaved through topics ranging from health care to immigration, McSally fought back against questions about her voting record and stances on those issues.

When asked about her motivation for voting to allow internet service providers to sell private information online, McSally denied acting on behest of corporate political action committees and said such accusations had been debunked. She had received more than $40,000 in campaign contributions from the telecom industry when the vote was held.

“What are you even talking about?” McSally asked. “Of course I did not do that. And this has already been debunked. This is, again, what this campaign is all about, coming up with these lies and attacks that are fear tactics. I’m actually a privacy hound.”

McSally, who is anti-abortion, refused to give an answer when pressed about whether she would support the repeal of Roe v. Wade.

“I am pro-life and I have a very strong pro-life record,” she said. “I would support (Supreme Court) justices that are looking independently at the Constitution and the laws that we make, and that they will have a good decision-making process because of that.”

By the end of the hourlong debate, McSally was visibly frustrated, not answering a question about climate change and instead turning to her opponent and asking whether she would apologize for 2003 comments about the Taliban that McSally described as treasonous.

“CNN reported that in 2003, while she was on the radio, you said it was OK for Americans to join the Taliban to fight against us. I want to ask right now whether you’re going to apologize to the veterans and me for saying it’s OK to commit treason?”

“Martha has chosen to run a campaign like the one you’re seeing right now where she’s engaging in ridiculous attacks and smearing my campaign,” Sinema said.

After the debate, both candidates fielded questions from reporters, but both pointed to their voting records as an indicator of how they would represent the state.

“She’s taken all of my quotations out of context,” Sinema said, referring to McSally’s “ridiculous” remarks about the Taliban. “I would ask people to take a look at my record and judge me for who I am.”

McSally had similar comments for reporters.

“My voting card belongs to the people of southern Arizona right now, and when I’m in the Senate, my vote is going to belong to the people of Arizona,” she said. “Please, look at our records. Look what we’ve done with our lives. And then when it really matters, look at how we voted.”

Democrats have cited the race as an opportunity to shift the power balance in Congress.

“There’s this looming question that ‘Oh my gosh, could Arizona be a purple state?’ so to speak,” said Danielle Kurtzleben, NPR politics reporter. “That has everybody watching pretty closely to see if it’s possible that the route of long-standing, relatively red state could be moving in a less-red direction.”

The candidates have poured millions of dollars into advertising attacking one another, and this was their only debate.

The race is historic for Arizona, which has never sent a woman to the U.S. Senate. Arizona is one of six states that have female Republican and Democratic candidates seeking Senate seats in the 2018 midterms, according to CNN. Additionally, the state has not elected a Democrat as senator since Dennis Deconcini’s re-election in 1988.

Arizona’s Senate race could be gaining national attention because Democrats have “very few options to play offense” in this year’s election, said Kyle Kondik, who analyzes elections with the University of Virginia Center for Politics. Of the 35 available Senate seats, the Democrats now hold 26.

“Kyrsten Sinema seems like a very serious candidate, so does Martha McSally throughout the cycle and polling is very close,” Kondik said. “It’s one of the more key Senate races in the country.”

Poll numbers indicate it might be a tight race. McSally is only 0.3 percentage points ahead of Sinema, 45.3 percent to 45 percent, according to averaged polling numbers by RealClearPolitics.

The debate aired live on Arizona PBS in Phoenix.