Monica Strauss of the Phoenix Public Works Department digs through a blue bin to determine how much of the contents can actually be recycled. It’s part of a new city effort to keep contaminants from spoiling entire truckloads of recyclable materials. (Photo by Stephanie Morse/Cronkite News)

PHOENIX – Monica Strauss pulls on a pair of plastic gloves every morning to dig through blue recycling bins set out on curbs in parts of the city.

The Phoenix Public Works Department employee is methodical as she approaches each blue bin and sorts through the paper, cardboard boxes, plastic waste and other contents. She jots down some notes and uses her industrial stapler to attach feedback to the bin.

She does the same at each container until nearly all the recycling bins in this neighborhood have green or red tags hanging off the lids. The green tags say “Shine on,” the red ones say “Oops” and explain what the homeowner needs to do differently.

The efforts are part of a new recycling program that gives residents individualized feedback. 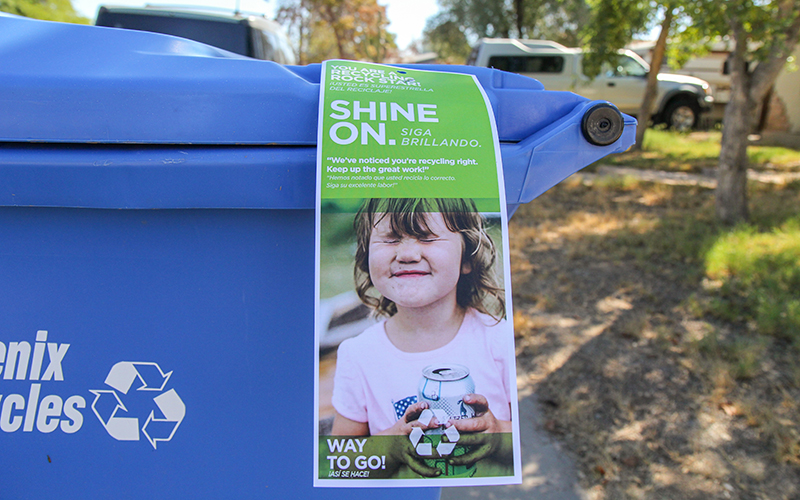 Phoenix residents whose recycling has no or very little contamination get a “Shine on” tag. The city is educating people on what they can actually recycle. (Photo by Stephanie Morse/Cronkite News)

Many people are overly ambitious when recycling and throw items in their blue bins that actually belong in the green trash bins. This contamination, if severe enough, can mean an entire truckload of recyclables ends up in the landfill.

Phoenix has an average recycling contamination rate of 30 percent, said Jesse Duarte, deputy director of public works for the city. But he said officials hope to drive that down to below 20 percent or less with the new education program.

“We’re educating our communities to know what they can and cannot recycle,” Duarte said. “It costs everyone more money when we have to stop the machines to get rid of contamination.”

Other non-recyclables, such as plastic bags and wrappings, can cause mechanical malfunctions that slow down the sorting process.

“The plastic bags get caught and can even break the machine,” said Colin Tetreault, chairman of the city’s Environmental Quality and Sustainability Commission. “Depending on the contamination, they have to shut the entire thing down to unclog the machine.” 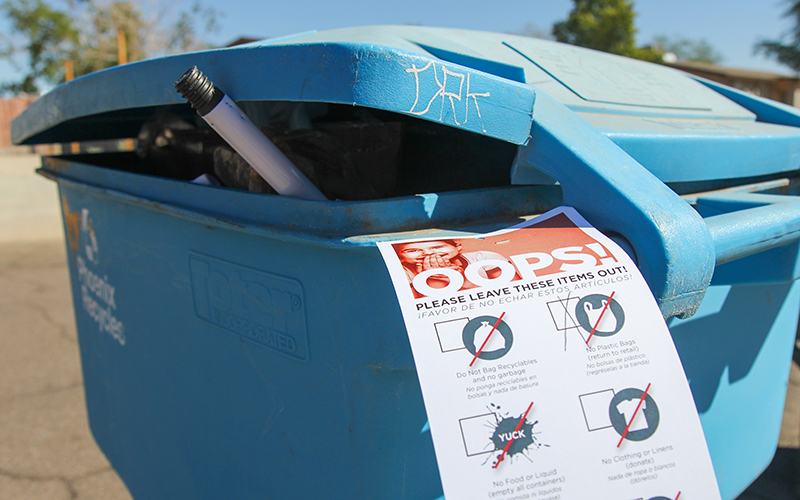 Phoenix residents whose recycling bins are 20 percent or more contaminated get an “Oops” tag and an explanation of the mistakes, such as including greasy pizza boxes and grass clippings. (Photo by Stephanie Morse/Cronkite News)

A truck will pick up residents’ recycling that has an “Oops” tag on the bin for two weeks. After that, the city won’t pick up the contaminated recycling, and city employees will roll the bin back up to the house.

City employees check a neighborhood’s bins once a week for five weeks. Residents earn a “Shine on” tag when they improve their recycling to contain none or very little contamination.

Duarte and Tetreault said the program is time-intensive but effective.

“They (residents) may not read their bill or they may not have internet access, but virtually everyone wheels out that barrel to the curb,” Tetreault said.

The city launched a pilot program in February with 1,200 households in southeast Phoenix.

Last month, Phoenix launched the program in neighborhoods across the city with historically high contamination. The city monitors data from each recycling route to determine which neighborhoods have the highest contamination rates.

The city also plans to periodically recheck households included in the pilot program to make sure they don’t fall back into bad habits.

“People probably forget about what’s recyclable,” Duarte said. “We want people to get more and more reliable about recycling correctly.”

Meghan Easter’s north Phoenix neighborhood is now part of the program. She received an “Oops” the first week.

“I’m not surprised,” Easter said with a laugh when she saw the tag. She said her kids are in charge of the recycling and often mess it up.

“I’m definitely going to take this opportunity to remind my kids again what can and can’t be recycled,” Easter said. “It’s important to teach them how to recycle, because they’re going to be the next generation to take care of our planet.”