The Arizona Department of Transportation monitors about 300 surveillance cameras in Phoenix and the rest of the state. That allows managers to track traffic patterns, blockages and accidents to safely provide quick responses. (Photo by Jéssica Alvarado Gámez/Cronkite News)

PHOENIX – Three people died every day on average on Arizona roads in 2017, and 152 people were injured, according to the Department of Transportation’s annual report on motor-vehicle crashes. Nearly three-quarters of accidents occurred from 6 a.m. to 6 p.m.

The report, released Tuesday, draws a detailed picture of such things as how often crashes occur, which days are crashes most likely and what the road, lighting and weather conditions were when the crash occurred. ADOT estimates that vehicle crashes result in $10.8 billion in economic losses. 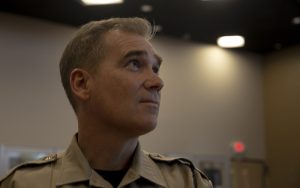 Officer Robb Brown of the Department of Public Safety said drivers should care about their own safety but also about the safety of other motorists. (Photo by Jéssica Alvarado Gámez/Cronkite News)

The ADOT Traffic Operations Center in Phoenix is staffed round the clock to monitor traffic speed, weather and road conditions, including highway debris that present safety hazards.

Department of Public Safety troopers also are stationed at the center during peak traffic hours to better coordinate the routing of emergency personnel and the clearing of freeways, which prevents secondary crashes and reduces delays. Authorities call the partnership a “force multiplier.”

Officer Robb Brown, who works at the center, has seen plenty of distracted drivers in his years with DPS. The best way to avoid collisions, he said, is simply to pay attention to the road.

“You are controlling 4,000 pounds of metal,” he said. “People look at it as a safe space and think nothing can happen to them behind that wheel.”

People often consider their vehicles second homes, Brown said. They feel comfortable enough to listen to music or talk on the phone that they end up not paying attention to what’s ahead of them.

The traffic center monitors about 300 surveillance cameras in Phoenix and elsewhere across the state, allowing personnel to provide quick services to the public.

“Often times when people are involved in horrific instances … the information they provide 911 isn’t always accurate,” Brown said, adding that the cameras make it easier to pinpoint exactly where incidents are, helping officials notify first-responders immediately.

“We basically strategize for our first-responders to get there (by) the quickest mode,” he said. “That way there’s no waste of time.”