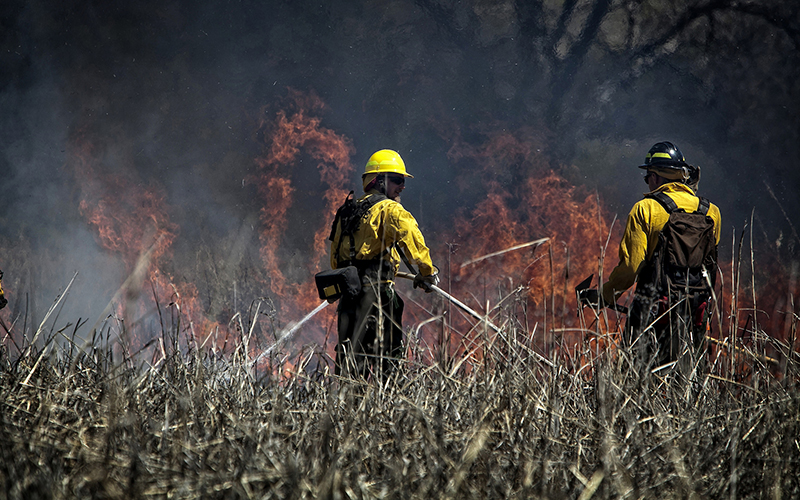 Fuel load is one of the factors foresters consider before lifting fire restrictions on federal lands. (Photo courtesy of Coconino National Forest)

PHOENIX – Monsoon rains have reduced the danger of wildfires in Arizona, prompting forest officials Wednesday to lift the ban on campfires in the Coconino National Forest and reduce fire restrictions in parts of the Kaibab and Tonto national forests.

Other federally controlled forests kept fire restrictions in place because of wildfire risks spurred by a lack of significant rain, according to U.S. Forest officials. They urged visitors to remain careful – humans cause more than 90 percent of wildfires in Arizona.

“However, just because restrictions are being lifted does not mean that fires cannot occur,” she said.

Tonto National Forest no longer bans campfires but restrictions remain in place because of fires caused by lightning and uneven rainfall. Only wood and charcoal campfires will be permitted in metal rings and pedestal grills provided by the Forest Service at dozens of campgrounds and recreation areas in Mesa, Cave Creek, Globe and other Tonto Forest sites.

Those restrictions, considered Stage 1, remain in place in the Gila National Forest, which is near the border of Arizona and New Mexico, because of inconsistent rainfall throughout the area, said Marta Call, spokeswoman for the Gila forest.

However, most state trust lands remain closed to recreational uses, including areas in Coconino and Apache counties, said Tiffany Davila, spokeswoman for the Arizona Department of Forestry and Fire Management. They should be opened soon depending on weather conditions. State land closures and restrictions can be found online.

National forest officials consider several conditions of wildfire risks to determine different levels of restrictions, Banks said. They analyze fuel conditions, which takes into account the amount of grasses, downed logs, and moisture of the vegetation in the forest area to predict how hot a fire might burn. They also consider how many personnel and other resources would be available to mobilize in the event of a fire, she said.

Officials are pleased visitors are following forest restrictions, which took effect one month earlier in the year than normal because of the long-standing drought. Fire restrictions typically go into effect for forests around late May, or early June, but this year, restrictions came as early as April, Banks said.

“We had an incredibly low number of human-caused wildfire starts on the forest despite being in extreme fire danger and having one of the driest periods on record in many years,” said Art Gonzales, fire staff officer for Kaibab, in a statement on the forest website. “When members of the public abide by fire restrictions and closures, they greatly help us in protecting their public lands and adjacent communities from the threats posed by human-caused wildfires.”

This season, nearly 1,200 wildfires have burned throughout the state, with more than 90 percent estimated to be human-caused, according to the latest data collected by the National Interagency Fire Agencies Southwest Coordination Center.