Federal officials said they still expect a “challenging” wildfire season in 2018, particularly in drought-ravaged areas of the Southwest. That comes on the heels o a year, 2017, in which the government spent a record $2.9 billion fighting wildfires. (Photo by Tim Mason/U.S. Forest Service) 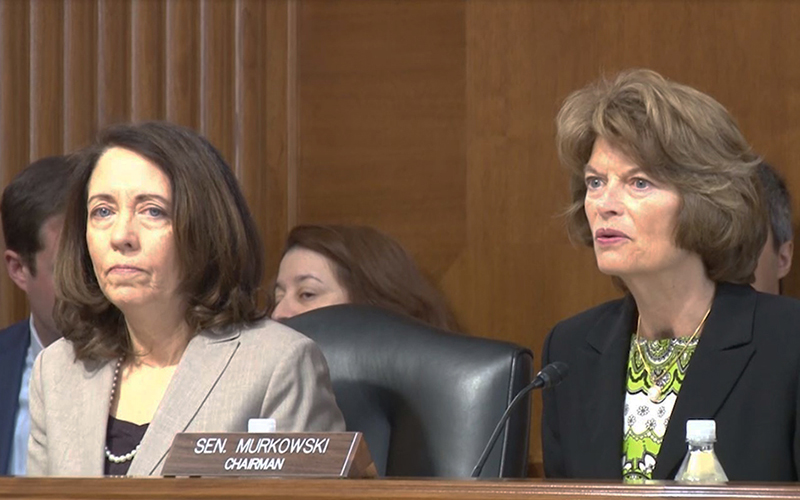 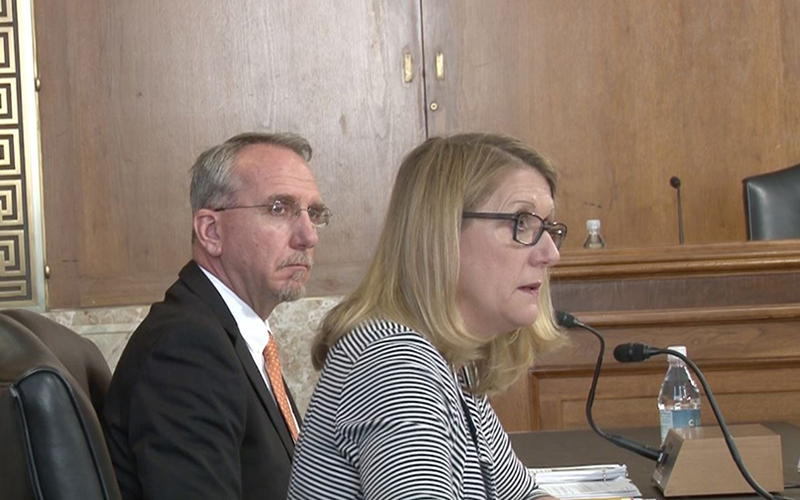 Jeffery Rupert, left, director of the Office of Wildland Fire, and interim Forest Service Chief Victoria Christiansen told lawmakers that they expect another difficult wildfire season this year, particularly in parts of the Southwest. (Photo by Dani Coble/Cronkite News)

WASHINGTON – Federal fire officials warned a Senate panel this week that the West should prepare for another “challenging” wildfire season, after a 2017 season that was the most expensive on record in terms of firefighting costs.

Officials with the Forest Service and the Interior Department said they think new funding approved by Congress earlier this year will help. But they note that 1.7 million acres have burned already this year and they don’t expect a let-up, particularly in the drought-ravaged Southwest.

“Above-average wildfire activity appears to be our new normal,” Victoria Christiansen, the interim chief of the Forest Service, said in testimony Tuesday to the Senate Energy and Natural Resources Committee.

Sen. Lisa Murkowski, R-Alaska, said the season got started on April 27 with the Tinder Fire in central Arizona, which she called the “first large-scale wildfire of the season in the West.”

“There are now several significant active fires, including massive blazes in Colorado and New Mexico that are forcing evacuations,” said Murkowski, the committee chairman. “Already this year, almost 24,000 wildfires have burned about 1.7 million acres across the country – and it is just June 5th.”

The Tinder Fire, sparked by an illegal campfire, had burned 16,309 acres near Blue Ridge Reservoir as of early Wednesday, when it was 95 percent contained but still “smoldering and creeping,” according to InciWeb, the Forest Service’s Incident Information System.

While that fire had been contained, InciWeb said there were four active wildfires in Arizona as of Wednesday, the largest being the 377 Fire in the Apache-Sitgreaves National Forest north of Heber. The fire had burned 5,180 acres and was only 20 percent contained Wednesday. 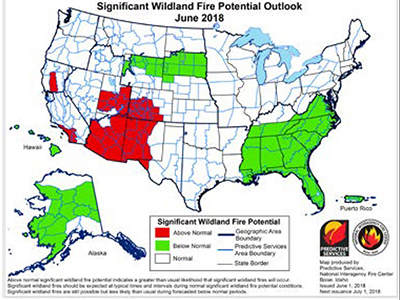 Wildfire conditions in Arizona are expected to remain high for the near future, with the National Interagency Fire Center’s monthly report calling for “overall temperatures to generally remain warmer average with drier than average conditions to remain intact overall for much of Southwest area through June.”

“Typically June is our worst month because it’s our driest month and our warmest month,” said Brady Smith, the public affairs officer for Coconino National Forest. “What needs to be understood is that fire is going to be on this landscape whether it’s by prescribed burning or by wildfire…. What we hope to do is keep it checked.”

Congress in March approved $1.5 billion for wildfire suppression this year, according to the Agriculture Department, which said that money will provide more resources to fight fires. But it will also be allocated up front – a move aimed at heading off the practice of “fire borrowing.”

Fire borrowing happens when firefighting costs exceed the money budgeted, forcing federal agencies to dip into other funds – often funds that were supposed to be used to prevent fires in the first place.

“In March, Congress took an important step by addressing the problem, and members of this committee have worked very hard on (the) omnibus bill dedicated to wildfires,” said Sen. Maria Cantwell, D-Washington, at Tuesday’s Energy and Natural Resources Committee hearing. “Fires are becoming more lethal.”

Jeffery Rupert, director of Interior’s Office of Wildland Fire, told the committee that 53 civilians and 14 firefighters were killed in 2017 blazes. He said another 21 died in “debris flows” that followed the fires, and research suggests that even more deaths may have been caused by smoke from the fires in what he said “will be remembered as the ‘Year of the Smoke.'”

Smith welcomes the additional firefighting funds this year, but said it’s just as important to have education efforts, which can’t be bought. The Arizona Department of Forestry and Fire Management said people cause nine of 10 wildland fires each year in the state, which has 19.4 million acres of forests and woodlands.

Paul Summerfelt, fire management officer for the Flagstaff Fire Department, agreed that fighting fires after they start is only part of the battle.

“From a fire perspective, the money will be certainly useful in Arizona and elsewhere to address fire suppression,” Summerfelt said. “In terms of addressing the issue long-term … suppression dollars alone will not help.”

He said communities need to be proactive, but that the problem is likely here to stay.

“Wildland fires, for most communities in Arizona, is probably the most serious annual disaster impact that we face,” Summerfelt said. “We roll the dice every year, and every year a community or area gets impacted by fire. It’s not a problem that is going away.”