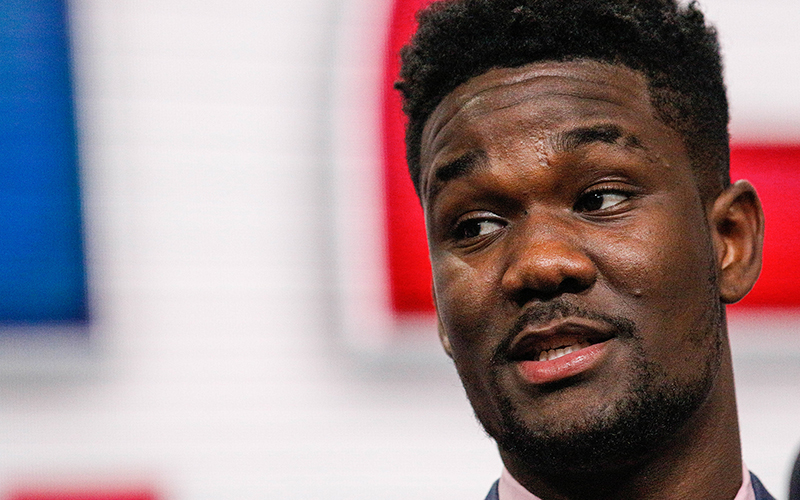 University of Arizona freshman Deandre Ayton became a Phoenix Sun when the team used the first pick in this year’s NBA draft on the center, who played high school basketball in Phoenix. (Photo by Bryan Pietsch/Cronkite News) 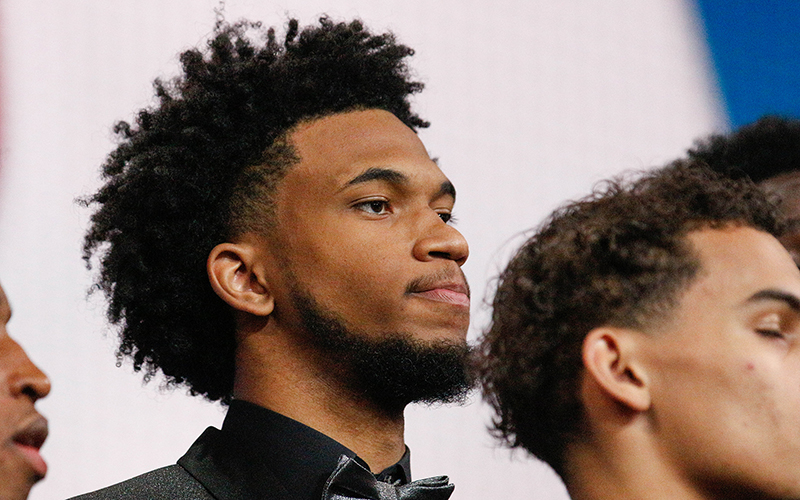 BROOKLYN, N.Y. – For the first time in franchise history, the Phoenix Suns had the first pick at the NBA draft Thursday and they looked close to home, choosing the University of Arizona center Deandre Ayton.

The choice came as no surprise to analysts who called it “the worst-kept secret” this year, to the characteristically boisterous crowd at Barclays Center – or to Ayton, who said after his only workout with the Suns, “I know I’m going No. 1.”

Despite Ayton’s confidence heading into the draft, he said he was nervous before the Suns’ pick was announced Thursday evening. He said he asked his mom repeatedly while they were seated in front of the stage if she thought he would be the first pick. 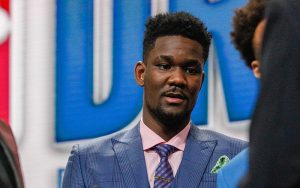 “Having my name called to be the first pick for the Phoenix Suns was mind-blowing,” Ayton said. “I just got up there and enjoyed the moment, and I saw the reaction on my mom’s face. It was just priceless.”

Ayton, who played at Hillcrest Prep Academy in Phoenix, averaged 20.1 points per game last year for the Arizona Wildcats, earning him Pac-12 Player of the Year and Freshman of the Year honors in his only season in college basketball before declaring for the draft.

The 7-foot-1-inch athlete said Thursday that he looks forward to the possibility of playing with the Suns’ Devin Booker. Ayton said the two could form a power duo he called “Shaq and Kobe 2.0,” referring to former Los Angeles Lakers teammates Shaquille O’Neal and Kobe Bryant.

“Having a guard like Devin Booker, who can really score the ball and me being a big man who can really pick-and-pop, very versatile, that’s very dangerous,” Ayton said.

But Ayton is used to playing with other skilled athletes: At Hillcrest Prep, he briefly played with Marvin Bagley III, a Duke University player who went No. 2 in the draft behind Ayton.

Bagley, a Tempe native, was selected by the Sacramento Kings. Ayton described growing up with Bagley and then being drafted right before him as “crazy.”

“We’ve been talking about it through high school, and now here we are,” Ayton said. “It’s breathtaking that my name was called … and then his name was called. It’s just a dream.” 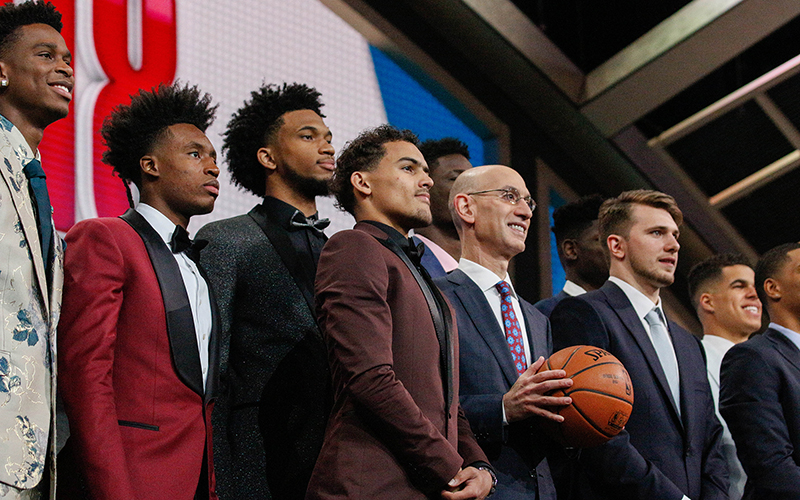 Ayton, a native of the Bahamas, wore Jamaican and Nigerian flags inside his suit jacket as a tribute to his parents. He said that off the court, his dream is to start his own brand. He recently signed with Puma, which he said is the “main brand” in the Bahamas because it’s more affordable than Nike or Adidas.

“(I grew) up around that brand, I’m used to that brand,” Ayton said. “I want to start my own thing. I want to be dominant in my own brand, and I want to have my own signature shoe one day to make it global.”

The Suns also had the 16th pick, which they used to choose Texas Tech freshman Zhaire Smith, who they immediately traded to the Philadelphia 76ers for Mikal Bridges, who had been selected from Villanova with the 10th pick.