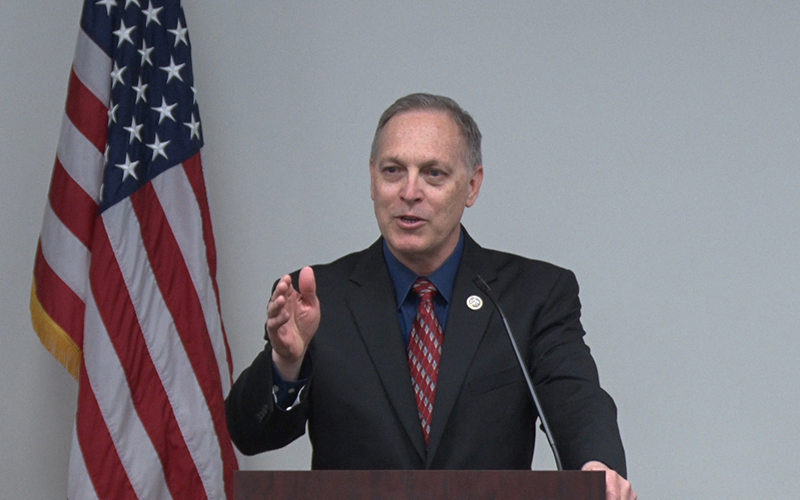 Rep. Andy Biggs, R-Gilbert, one of the leading advocates of the right-to-try legislation that passed the House this week, said the bill is about giving a chance to people with terminal illnesses. (Photo by Pat Poblete/Cronkite News)

WASHINGTON – When Brophy College Preparatory student Diego Morris needed a life-saving experimental treatment that was not available in the United States, he and his family did the only thing they could do.

They moved to London for a year where the drug regimen had already been approved.

“It was time-sensitive,” said a cancer-free Morris, now 17. “I just had a major surgery and I needed this treatment to coincide with my chemotherapy.”

Morris could have benefited from a law he and others have championed for years that would give patients with terminal diagnoses access to experimental drugs that could save their lives.

It took two years of legislative effort, but the House late Tuesday gave final approval to the so-called “right-to-try” legislation, which is now headed to President Donald Trump for his signature. The bill passed the Senate last year and the final 250-169 House vote was celebrated Tuesday by lawmakers and by families of patients who had been pushing for the bill.

Rep. Andy Biggs, R-Gilbert, and Sen. Ron Johnson, R-Wisconsin, two of the leading advocates for the bill, said they are confident Trump will sign the bill into law, bringing hope to patients with terminal diagnoses.

Diego Morris, in a photo from 2016, when he testified to a Senate panel in support of right-to-try legislation. (Photo by Wafa Shahid/Cronkite News)

“Have you ever seen a pharmaceutical ad on TV today that says, ‘Death may occur in some occasions’? We’re saying death will occur almost 100 percent of the time for these people unless they have a chance,” Biggs said.

“They want that chance. That is what this is about,” he said.

Forty states, including Arizona, now have right-to-try laws on the books. But the federal legislation was slowed by concerns that it would lead to exploitation of vulnerable patients who would seize at unrealistic hopes and suffer further damage in the process.

Morris said he does not understand the opposition to the measure. If it weren’t for the experimental treatment he received, he says he would have died of cancer.

When he was 11, Morris was diagnosed with osteosarcoma, a bone tumor that required countless rounds of chemotherapy and limb-salvage surgery that replaced part of his femur and knee with titanium prosthetics. But after he got the prosthetics, he still needed help to beat the cancer.

“My parents were made aware of an experimental treatment that was approved in Europe and around the world, but didn’t pass in the U.S.,” Morris said in a phone interview Wednesday.

His family tried everything, including trying to get him the treatment at home, but the administrative process for clearance to try the drug was taking too long. So the family moved to London for a year to get Diego the medicine he needed.

After moving back to the U.S., Morris became an advocate for giving patients access to experimental medicine, testifying before Congress and serving as honorary chairman of a Goldwater Institute initiative to pass the right-to-try ballot initiative in Arizona.

“I really wanted to help,” he said. “I think it’s important for American families to have the right to save their own lives.”