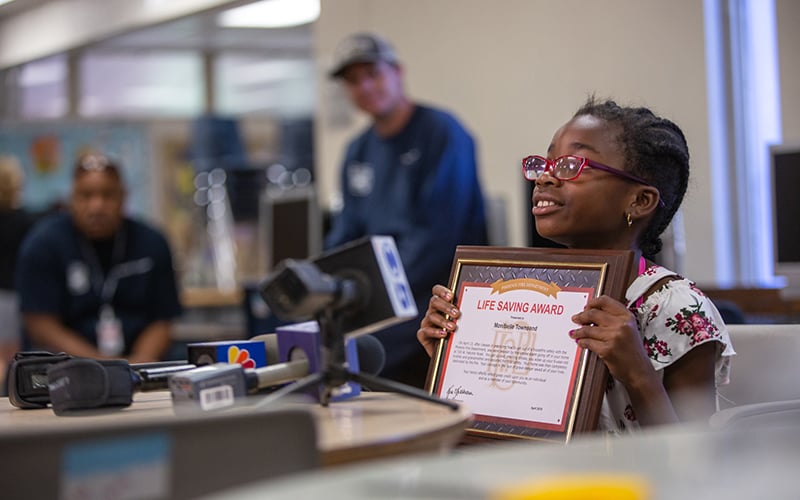 Monibelle Townsend used the techniques she learned from Phoenix firefighters to save her brother and grandmother from a fire that destroyed their home. (Photo by Ellen O’Brien/Cronkite News)

PHOENIX – When 7-year-old Monibelle Townsend heard her family’s smoke alarm go off and smelled smoke, she said she knew what to do, thanks to training she had received at school just days before.

She woke up her grandmother and 6-year-old brother and escorted them to safety. Her home was destroyed by the fire, but her family was saved. 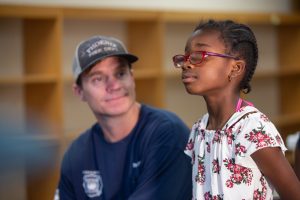 Phoenix firefighter Tommy Reeves said Monibelle Townsend and her family were already safely outside her home when firefighters arrived, thanks to her quick actions. (Photo by Ellen O’Brien/Cronkite News)

“I feel happy about winning this award because I didn’t want my family to get hurt,” the 7-year-old said. “My grandma didn’t know what to do, so I just had to do something to save them.”

Just days before the April fire, Phoenix firefighters had shown Monibelle and her classmates fire-safety techniques, including how to stop-drop-and-roll, crawl low under smoke and feel doorknobs with the back of their hands to see whether there’s fire on the other side.

“We think (the safety training) was what helped her have the wherewithal to get her brother out … and help her grandmother out of the house as well,” he said.

Reeve said stories like Monibelle’s remind firefighters that they’re making a difference. “When we hear a story like this, it just helps us keep doing what we’re doing,” Reeve said. “It motivates us.”