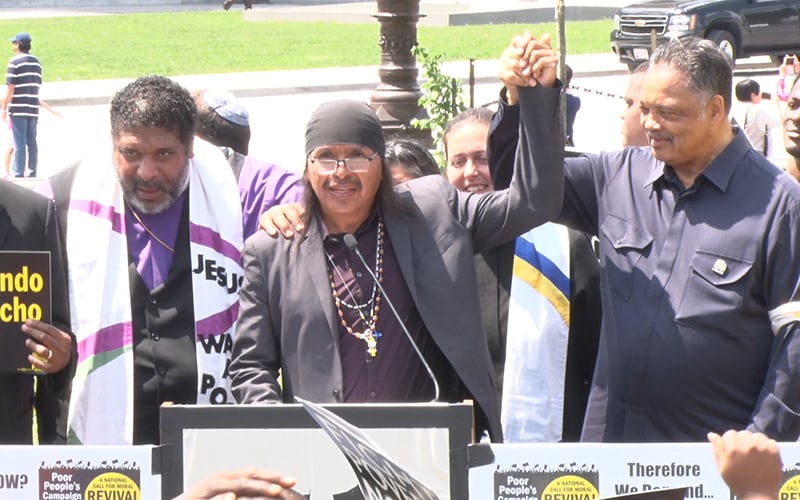 Wendsler Nosie Sr. raises hands with the Rev. Jesse Jackson during a Poor People’s Campaign rally on Capitol Hill that touched on everything from environmental racism to voting rights. (Photo by Pat Poblete/Cronkite News) 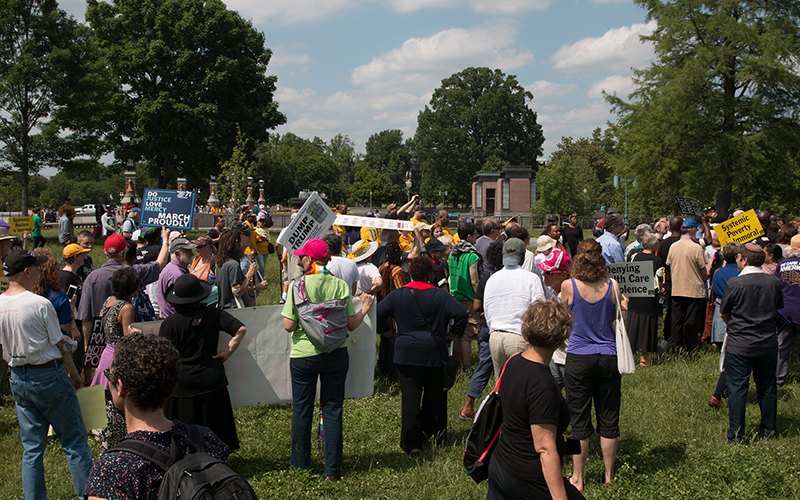 Dozens showed up for a Monday rally organized by the Poor People’s Campaign on the East Front of the Capitol to “demand that elected officials take immediate steps to confront systematic racism.” (Photo by Sarabeth Henne/Cronkite News) 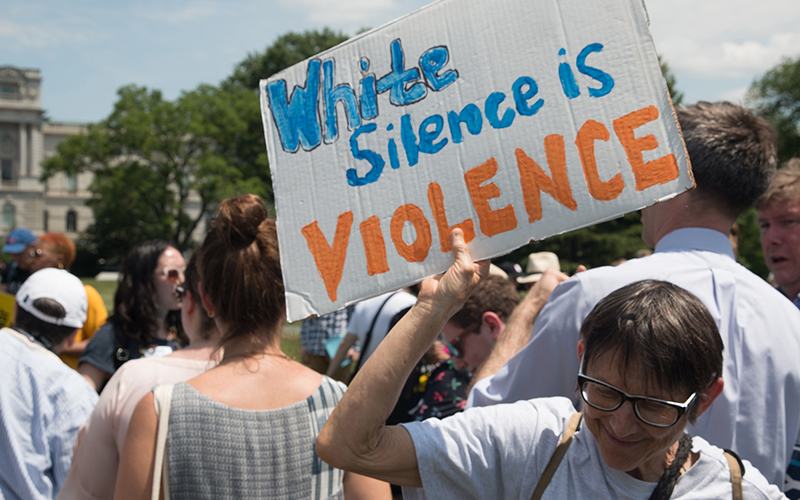 A protester at the Capitol Hill rally organized by groups protesting what they said is suppression of poor and minority voters that leads to a variety of ills. (Photo by Sarabeth Henne/Cronkite News)

WASHINGTON – Wendsler Nosie Sr. told a Capitol Hill rally Monday that Native Americans face a slew of challenges today, from voting rights to environmental justice, but that none are as important as resolving water and land management issues.

“There are many issues that need to be addressed and that need attention, but Congress doesn’t matter if there’s no water,” said Nosie, a former San Carlos Apache Council member who addressed the Poor People’s Campaign rally.

“If it was a few years ago, I would be standing here telling you, ‘I’m representing Indian Country and educating you on all the atrocities that have taken place to our people,'” Nosie said. “(But) our urgent fight today is water and our sacred and holy lands.”

His remarks were part of a wide-ranging rally by dozens of activists who heard speakers urge Congress to take action on everything from voting rights to fights over the minimum wage.

The Washington rally was one of several across the country Monday, part of a planned 40-day push by the Poor People’s Campaign that began last week. The latest movement, echoing the themes of the 1968 campaign of the same name, says on its website that its moral agenda is “based on fundamental rights” aimed at systemic racism, poverty and inequality, ecological devastation and what it calls the war economy.

As with the 1968 movement, there were religious overtones to this latest campaign, dubbed “40 Days of Moral Action.”

“What brought me out here today is my faith and my conviction that God intends for every human being in the nation and in the world to have what is necessary for their flourishing,” said the Rev. William H. Lamar IV of the Metropolitan African Methodist Episcopal Church in Washington.

That religious aspect of the rally was echoed by Art Laffin, a Washington resident who turned out for Monday’s event.

“I am here … with people around the United States who are demanding a moral revival in this country,” Laffin said. “And to address the issue of environmental justice, which is a sin … and to protect the environment.

“We only have one common home – our Earth. We have to learn to live together on this Earth and that means sharing the resources that we have instead of exploiting them for profit,” he said.

Nosie said he wants the main takeaway to be recognition of the exploitation of natural resources.

“The most important thing is that what people need to know in this country is that we’re using and ruining all the last natural resources that we have,” said Nosie, who is active in Apache-Stronghold, a group that has been fighting to block the Resolution Copper mine at Oak Flat in southern Arizona.

After the hourlong rally, the group took its protest to the Capitol, where U.S. Capitol Police said 59 were arrested for unlawfully demonstrating inside the building, and were subsequently charged with obstructing. Among those arrested were Lamar and the Rev. Jesse Jackson, founder of the Rainbow/PUSH Coalition.

Lamar said the goal is to shake the government from its complacency on public policy, whether that is in health care or environmental protection, but he stressed that the rally was not just about minorities.

“This is about everyone,” he said. “This about everybody getting what they should get as citizens of the nation.”

Nosie was not among those arrested. But he said believes Monday’s protest was a step in the right direction.

“I would call this morning a success,” Nosie said Monday evening. “We’re moving forward and gathering more people. We will pick up momentum.”