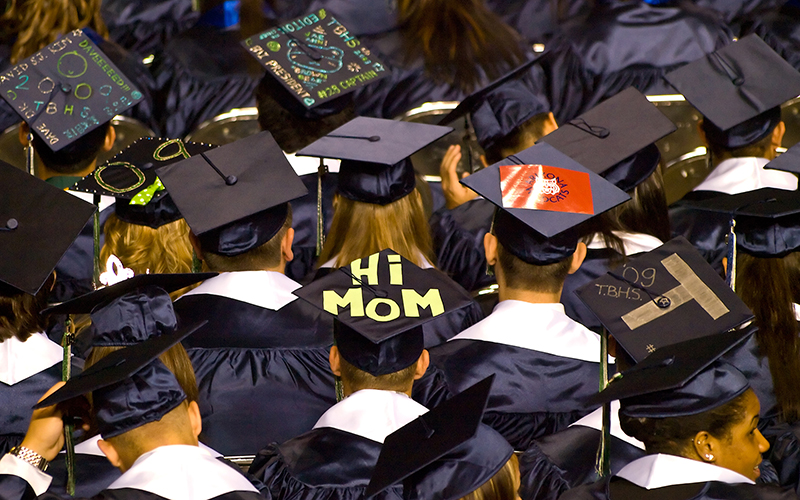 Despite improvements in recent years, the percentage of Native Americans who graduate from high school still trails the U.S. average, and all other racial and ethnic groups. And the graduation rate is even worse at schools run by the Bureau of Indian Education. (Photo by Michael B/Creative Commons) 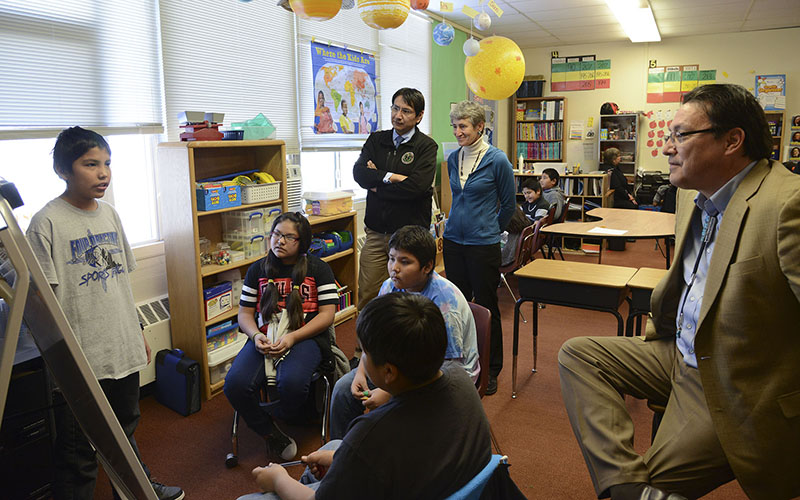 WASHINGTON – When President Lyndon Johnson laid out a set of sweeping plans for Native American education 50 years ago, from preschool to college, one of the most immediate goals was enrolling 10,000 tribal youth in Head Start programs.

That goal was soon met, but little else envisioned by Johnson has progressed as successfully.

Fifty years after Johnson’s “Special Message to the Congress on the Problems of the American Indian: ‘The Forgotten American,'” there has been progress in the education of tribal youth. But Native Americans still lag behind the rest of the country on test scores, graduation rates and school resources.

A previous version of this story incorrectly attributed some information to New Mexico tribal education specialist Regina Bitsoi, who said she did not speak to a Cronkite News reporter. The quote in question has been deleted from the story. Clients are asked to kill or replace any previous versions with this one, and clients who used earlier versions are asked to run the correction found here.

American Indian students have seen little progress in standardized testing scores, high school graduation rates and expulsion rates. Some experts say the results are not surprising given the lack of resources for tribal schools.

A case in point is Havasupai Elementary School, which was ranked the lowest-performing school in the Bureau of Indian Education system in a 2014-2015 bureau report. Nine students from the school have sued the bureau for “knowingly failing to provide basic general education.”

Rep. Tom O’Halleran, D-Sedona, whose district includes the Havasupai reservation, said he has “grave concerns” about the school’s “abysmal” performance. In an April letter to BIE Director Tony Dearman, O’Halleran said he was told there was only one permanent teacher and one special education teacher for all nine grades in the school.

“The lack of attention to Havasupai Elementary and the resulting poor educational outcomes and safety concerns are completely unacceptable,” O’Halleran wrote. “From a mishandled sexual assault case to abysmal educational outcomes, the Bureau of Indian Education has repeatedly failed the Havasupai Tribe, and we ought to be ashamed.”

The 2014-15 BIE report listed students at the school as “0 percent proficient” in both English and math sections, a number mirrored in Native American National Assessment of Education Progress scores.

American Indian/Alaskan Native students are the only subgroup that has not shown steady improvements proficiency in both reading and math.

When Johnson spoke in 1968, he said the average American Indian adult had an eighth-grade education, that 10 percent of Indian children over age 14 had no schooling at all and that “roughly half” of Indian children did not finish high school.

The high school graduation rate for Native Americans had risen to 67 percent by 2014, according to the Native Youth Report for that year. It was 72 percent by 2015-2016, according to the National Center for Education Statistics, but that still trailed far behind the national average of 84 percent that school year, and graduation rates at BIE schools trailed farther still.

“The American Indian/Alaska Native high school graduation rate is 67 percent, the lowest of any racial/ethnic demographic group across all schools,” the Native Youth Report said in 2014. “The most recent Department of Education data indicate that the Bureau of Indian Education (BIE) schools fare even worse, with a graduation rate of 53 percent, compared to a national average of 80 percent.”

There are currently 183 BIE schools, 54 of which are in Arizona, more than any other state, according to a bureau directory. Bureau officials did not return calls seeking comment for this story.

But the national average for Native American students does not reflect the situation everywhere in Indian Country, said Ahniwake Rose, executive director of the National Indian Education Association. She said the numbers will fluctuate by state, and that there are “definitely areas that are doing and seeing better than others.”

“Even if we are able to find out how our students are performing as a general population, there is a really big difference in American Indian/Alaska Natives,” Rose said. “How kids are doing in Alaska, which is much different than how kids are performing in White Mountain Apache, so it’s not a cohesive picture.”

Rose said one reason for that is the lack of data on tribal education.

But she said there have been gains, none more impressive than the Head Start surge Johnson envisioned.

Rose said the program has seen “great success,” with 24,700 tribal children currently enrolled in Head Start. She calls the program “absolutely vital” to the academic success of tribal youth.

“The LBJ stat about 10,000 children hoping to be in this program, we were absolutely able to do that,” Rose said. “Tribes are able to create culturally appropriate language programs and curriculum that are engaging for tribal students, which is vital to their success.”

Given the faltering gains of the past 50 years, Rose said the need for tribal education reform is “desperately needed,” now more than ever.

“Indian students are the only students that America has a constitutional requirement to educate,” she said. “We really need to pay attention to what is happening with them now and not leave them behind while others climb so far ahead.”