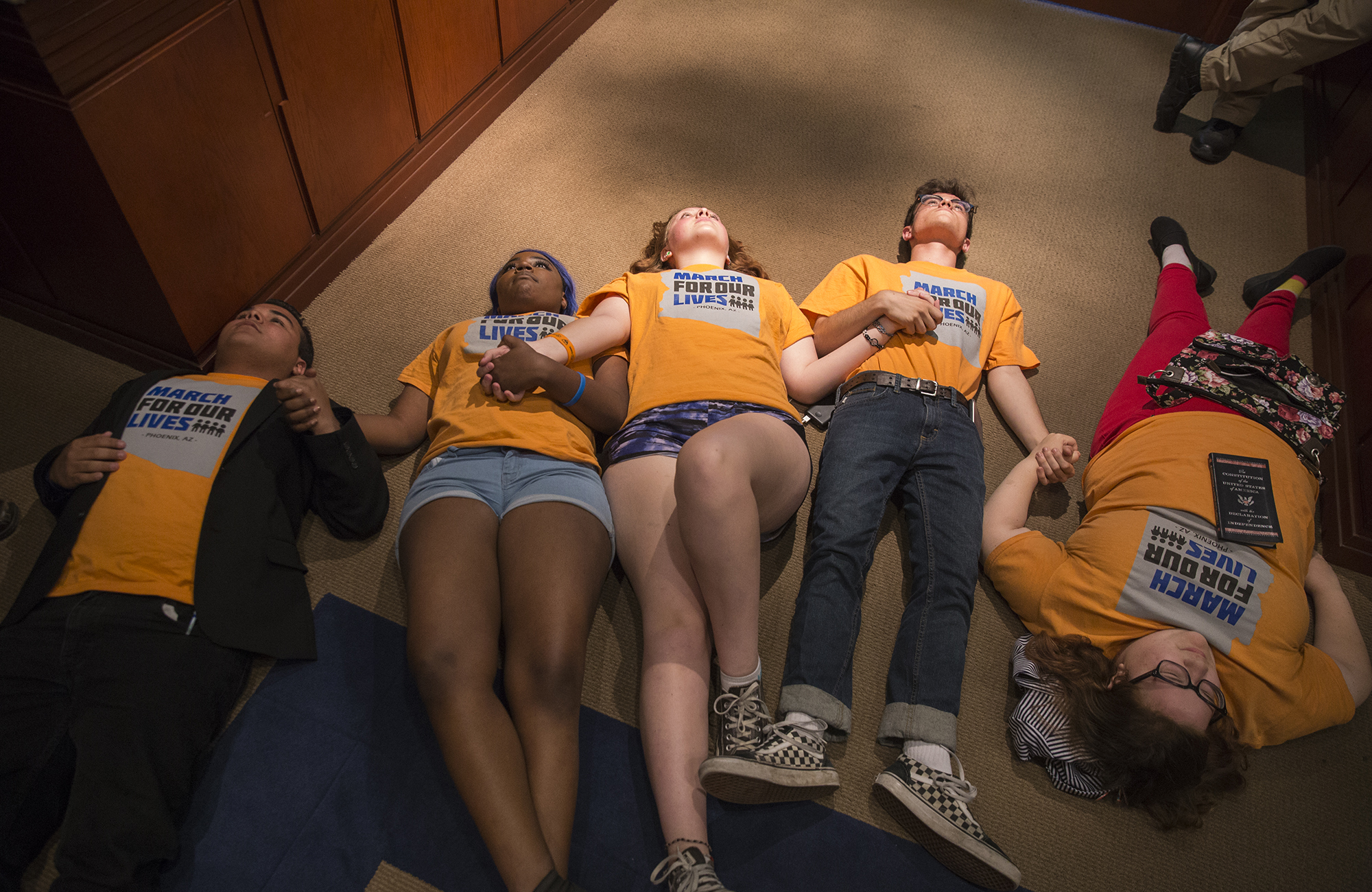 PHOENIX – Three high schoolers filed into the waiting room outside Gov. Doug Ducey’s office at 4:17 p.m. They lay down on the floor and settled in, with a plan to wait until one of two things happened: either authorities would arrest them or Ducey would agree to meet with them.

In the lobby of the House of Representatives and the Senate, about 100 other activists were doing the same thing. They had organized the protest for Friday, the 19th anniversary of the Columbine High School shooting. It was part of a national effort for gun control born out of the tragedy in Parkland, Florida.

In the waiting room outside Ducey’s office, two other students joined the “die-in” 15 minutes later. Dawn Motley, a junior at Mountain View High School, lay on the floor with her hands crossed over her chest. She held a Constitution tightly between her fingers.

The Friday night “die-in” made national headlines, drawing attention to the students’ cause. It didn’t, however, spur Ducey to action. Ducey, a Republican up for re-election this year, on Saturday released a statement through a spokesman that did not address the Friday protest, but it mentioned the governor’s “Safe Arizona Schools” plan.

The statement called the plan, which has not yet received legislative approval, a “common sense proposal to make our schools and communities safer.”

On Saturday morning, the students spoke at a news conference on the Capitol lawn, where they decried Ducey’s lack of response to their protest and their treatment during the “die-in.” They promised repercussions on Election Day if Ducey does not agree to their request for a meeting.

Jacob Martinez, one of the student protesters, told Cronkite News on Saturday their efforts were worth it because they sent a clear message to Ducey. Cronkite News journalists witnessed the six-hour protest, and here’s what happened:

Motley said the “die-in” was a result of Ducey’s earlier refusals to meet with the students.

“Enough is enough,” she said. “We’ve been asked to be brought to the table for over a month now, and it’s escalated to this.” 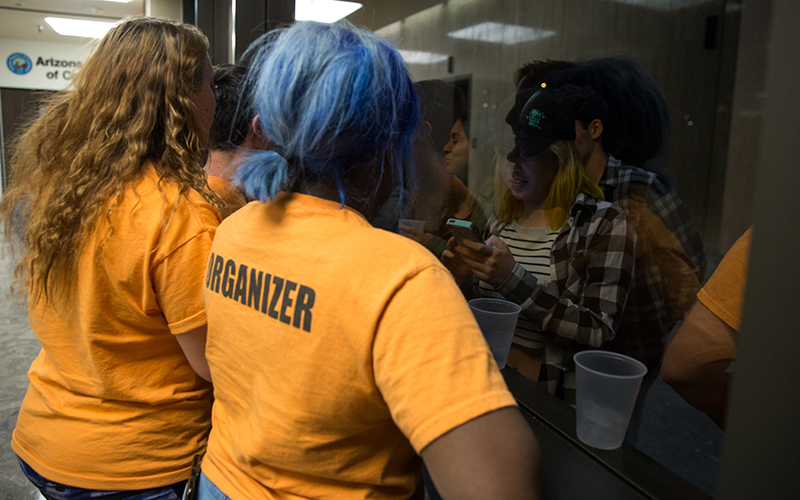 Student gun control activists Emma Quinlan and Beyoncé Brooks talk and mime through the window of the Executive Tower on Friday to other students. (Photo by Jenna Miller/ Cronkite News) 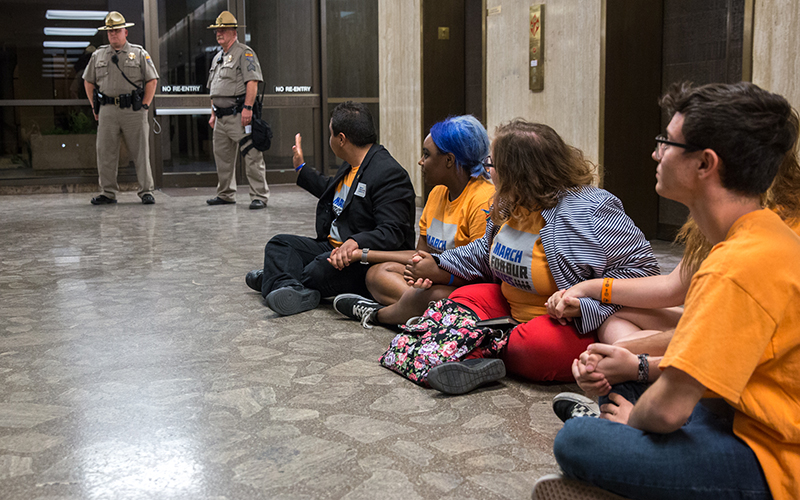 Department of Public Safety officers had warned the students that the nine-story Executive Tower, which houses Ducey’s office, would close at 5 p.m. The officers said they would arrest the students if they stayed longer than that.

The students said they would. And they even warned their parents.

Martinez, a 17-year-old activist from Dobson High School, said his mom wasn’t thrilled, but she understood why he felt the need to risk arrest.

For Jordan Harb, a 17-year-old from Mountain View High School, the governor could have resolved the issue if he agreed to call a special session on gun control, vowed to meet with the teenagers and commit to strengthening background checks and providing more money for school counselors, they would leave his office. If not, they would stay.

The teenagers didn’t say anything. They continue to lay on the floor.

Martinez said DPS officers left the waiting room at 5:45 p.m. The students stayed in the dark and didn’t have access to restrooms or water. Officers told the students if they left the room, they would not allow them back into the office. So they waited.

Martinez said they noticed the room getting colder. One student stood up to check the thermostat, which had been turned down to about 60 degrees. 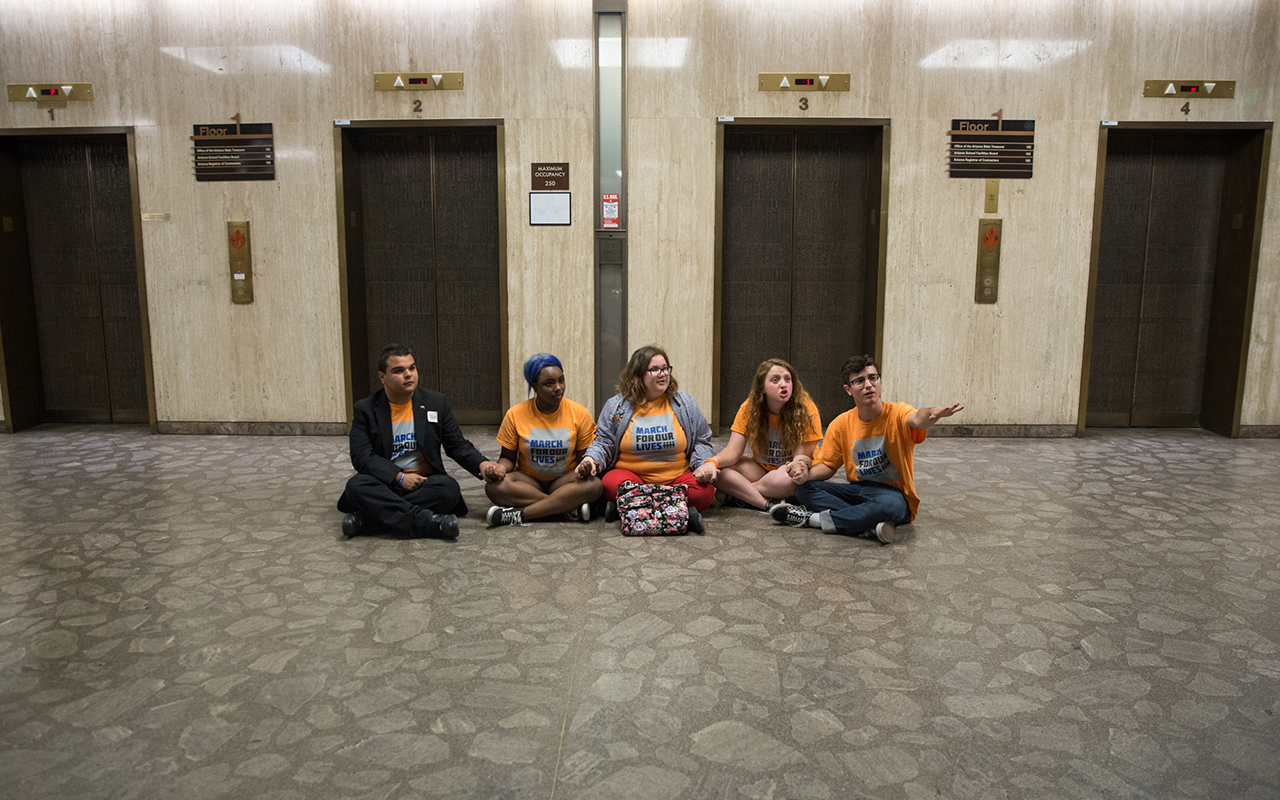 Jordan Harb, right, held out his hand for those present to feel the temperature of his body after remaining in the lobby outside of Gov. Doug Ducey’s office for about four hours. The student March For Our Lives leaders said the temperature in the upstairs lobby had been turned down to about 60 degrees. The students staged a “die-in” in the Executive Tower on Friday to call for Ducey to engage with them on gun-control issues. (Photo by Jenna Miller/Cronkite News)

“They tried to freeze us out,” he said.

For two and a half hours, the five students remained in the waiting room by themselves. Eventually, Harb said, his fingers turned purple from the cold. He was wearing a T-shirt and jeans.

At about 8:20 p.m., the five students took the elevator to the first floor. They stepped out with linked arms, and Harb told DPS officers they planned to stay the night, but had to use the restrooms.

The teenagers took off running to the bathrooms. When they returned to the first floor lobby, officers told them they could not use the outlets to charge their phones or the bathrooms because the building was closed.

The students sat on the floor of the lobby and read the Constitution aloud with DPS officers flanking them.

At 8:40 p.m., the officers reminded the students and the media present that the building was closed, and they would arrest those who stayed for trespassing. 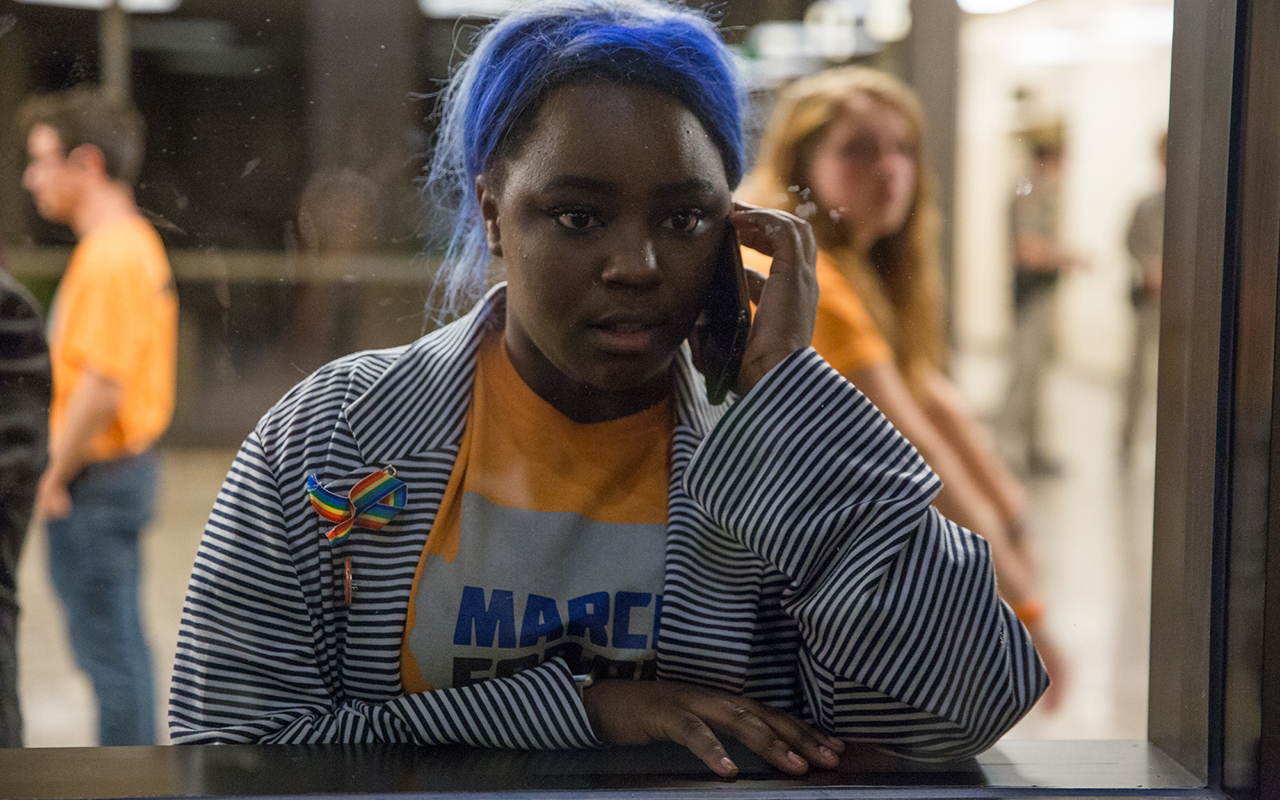 Student March For Our Lives movement leader Beyoncé Brooks communicated with parents and advocates outside at the “die-in” in the Executive Tower Friday night. Department of Public Safety officers told the students they were unable to charge their cell phones in the Executive Tower after hours, so they took turns sharing the phones that had battery life through the six-hour protest. (Photo by Jenna Miller/Cronkite News) 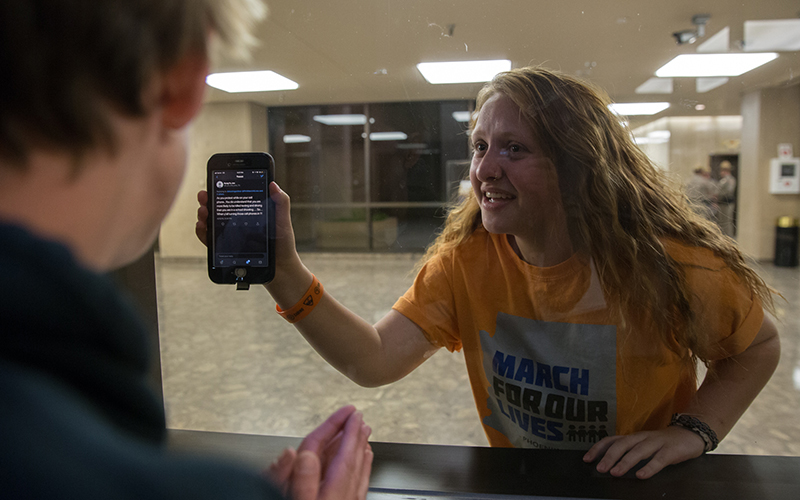 Student activist Emma Quinlan showed her mother, Kate Carter, a tweet saying that students should be more concerned about tweeting while driving than school safety. The two communicated through the window while five students in the Executive Tower protested for gun-control reform. (Photo by Jenna Miller/Cronkite News) 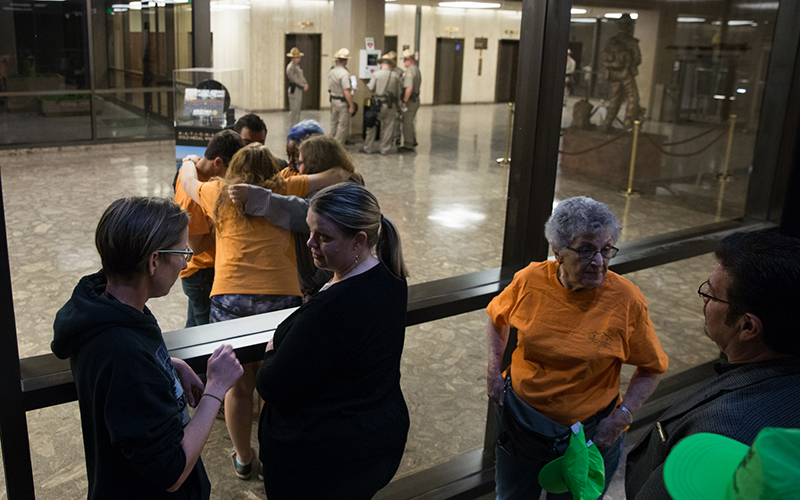 Emma Quinlan, a 17-year-old activist, used sign language to communicate with her mothers, one of whom is an attorney, who were watching the students through the window.

Kate Carter stood on the outside of the building.

Inside, the DPS officers separated the teenagers and recorded their names.

At 9:45 p.m., Cynthia Aragon, the chief of staff for the House Democrats, spoke with the teenagers for 20 minutes. The students have spoken with Aragon several times in the past. Martinez said Aragon updated them about the events outside and talked to them about their options moving forward. They listened, but ultimately decided on their own to stay in the building.

Outside, DPS officers explained to the teenagers’ parents the repercussions the students faced if they stayed, including arrest.

The parents said their children understood the risks and knew their rights. 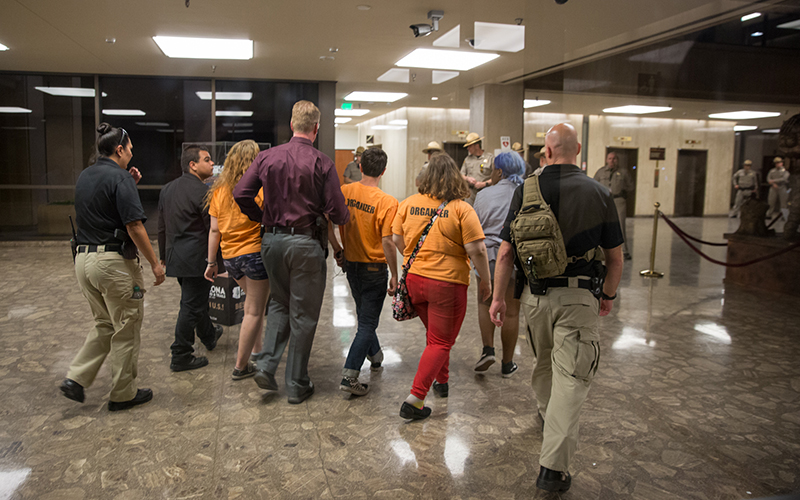 After a six-and-a-half hour standoff in the first floor of the Executive Tower on Friday night, five student March For Our Lives movement leaders were escorted from the building by Department of Public Safety personnel. The students said they had planned to stay in the building all night to protest for safer schools and call Gov. Doug Ducey to open a dialogue with them on gun control. (Photo by Jenna Miller/ Cronkite News)

At one point, Carter went to the window and told her daughter Emma Quinlan: “They want you to know this is going to go on your permanent record, do you feel like you’re aware of that?”

Both Quinlan and Carter laughed.

About 10:30 p.m., DPS officers told the students to stand up. One grabbed Harb and Quinlan by the arm. One officer put his hand on Motley’s back. Beyonce Brooks, who was one of the five, followed along with Martinez.

The officers led the students out of the building, where they met their parents and Bronwyn Doebbeling, the lone student who had stayed in the House of Representatives building.

The students hugged each other and their parents. Doebbeling cried, and Harb was shaking so badly, he had to sit down.

To Ducey, Martinez had one message: “You turned your back on the children of Arizona, and we will see you in November.”

Daniel Scarpinato, a spokesman for Ducey, said in the statement the governor’s plan would keep guns “out of the hands of anyone who poses a threat to themselves or others,” would fund additional school resource officers and mental health counseling, and would establish a tip line. 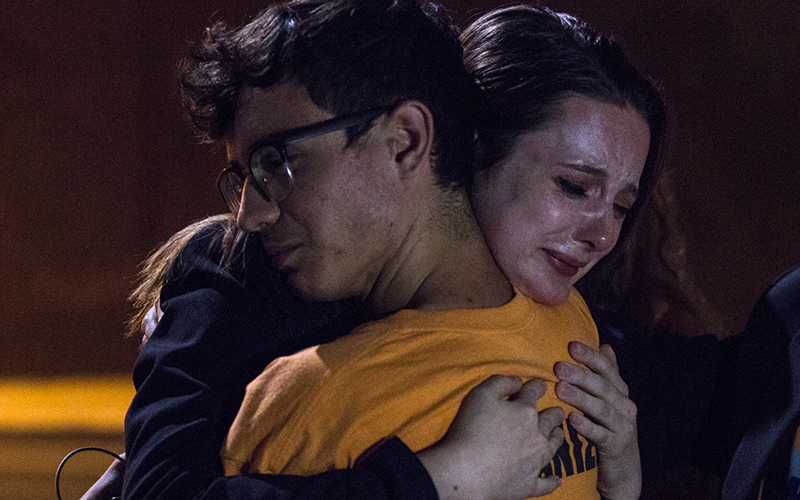 Student gun-control activists Jordan Harb and Bronwyn Doebbeling embrace after leaving the “die-in” at the Executive Tower and the House lobby, respectively. Both students were visibly shaken. (Photo by Jenna Miller/Cronkite News)