PHOENIX – The Parkland shooting sparked the student-led national gun-control movement, but Phoenix leaders say reactions on social media toggle between support and opposition, with some gun advocates hurling profanities, insults and even threats at high schoolers.

One person faxed a threat to an activist’s high school, but most people post their comments on the March for Our Lives Phoenix protests on Facebook or tweet them to activists’ personal or organization accounts.

Some make them smile. You just take my breath away, young friends.

Some make them cringe. you children are brain dead. you are all fakes, liars, glory seekers.

Some make them shake their heads. it’s shameful how the Left uses kids as props to push their agendas.

Some make it difficult for their parents to sleep at night. these morons don’t realize they aren’t safe anywhere.

The students say most comments, messages and tweets support the rallies and school walkouts, voter registration drives and sit-ins. Others express thoughtful opposition. And some are ugly, attacking their looks, their ability to think for themselves or their entire generation.

Social media experts say trolling is routine for this digital-native generation but negative comments can put their developing self-esteem at risk. And the Phoenix activists, who joined the national youth movement that arose from the Parkland, Florida, school shooting, haven’t had prominent, powerful people attack them, compared to the Parkland survivors. Still, they’re putting a protest born of social media into action, with the latest move a Friday rally at the state Capitol that is expected to include some of the Parkland survivors.

“People call me scrawny, that I need to go back to school, that I’m dumb,” Harb said. “They claim that we’re here coming from an emotional standpoint … yet they’re in the comment section calling me names.”

It’s harder for his parents, Harb said. Comments aimed at their son unsettle them. He said he sees a threat as an intimidation tactic. They take them seriously. Someone faxed a threat to his high school threatening Harb. He never read it; he said his mother thought it would be best if he didn’t.

Jacob Martinez, 17, the former chairman of the Arizona Teenage Republicans, became a target of his former supporters when he released a Facebook video supporting gun control in the days after Parkland.

He was called a sellout, accused of being a pawn for the Democratic Party and his U.S. citizenship was questioned. One comment compared him to Nikolas Cruz, who’s accused of the massacre at Marjory Stoneman Douglas High School in Parkland.

“Young people have grown up, in many cases, developing thick skins for online personas,” Halavais said. “They are probably more capable of defending themselves than adults would be when attacked in this kind of personal way.”

“They’re just there to stir a reaction and cause trouble,” he said. “At the end of the day, we’re not going to sway their opinion.”

Two weeks after Martinez posted his video, he responded to critics on Facebook: “I know many of you are unhappy with me. Instead of bottling up your anger with me, talk to me. Instead of unleashing profane tirades, let’s create a dialogue… Despite what you may think, the mental toll constant attacks take on a sixteen year old is quite immense, and i’d love to work with everyone again. – Jacob.” 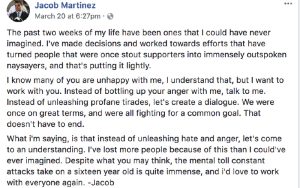 Halavais worries the negativity could affect the teens’ self-esteem at a time when it’s fragile.

“Kids develop their self-image in the mirror … in the way they see society seeing them,” he said. “So when a large portion of that society is distorting the view of who they are … it can be fairly damaging.”

Some of the commenters say they’re fat or scrawny, ugly or stupid. They hurl the word “gay” as if it’s an insult. They ask whether the Latino activists are “illegal.”

It’s good to keep in mind, Halavais said, that most people trolling on social media treat it like a game.

“This is their bowling league,” Halavais said. “Their community is being a horrible person online.”

The student organizers said they have learned to separate internet noise from their real lives.
Lindsay Schawelson, 18, said that when she first started reading negative comments, they seared her. Now they embolden her. 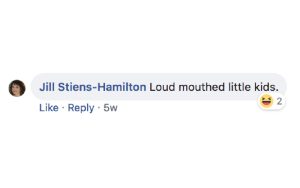 The Parkland survivors have become adept at social media. One sent a pained tweet to President Donald Trump in the hours after Feb. 14 shooting that killed 17 students and staff.

On a national scale, Parkland survivor David Hogg has successfully leveraged his social influence to urge his followers to boycott companies with ties to the National Rifle Association.

After Fox News host Laura Ingraham tweeted about Hogg being rejected by four colleges and “whining” about it, he called for advertisers to drop her. And more than a dozen did.

And although the Phoenix March for Our Lives teenagers don’t have that kind of pull, they still use social media to call their followers to action, announce their next steps and make their views clear to Arizona Gov. Doug Ducey, who has so far refused to meet with them.

Martinez said their presence on social media platforms helped them organize a 15,000-person march last month, conduct voter registration drives and coordinate a “die-in” planned for Friday at the Capitol.

“Particularly in this movement, you see young people getting a voice,” Halavais said.

He said young people have changed the public conversation in other grassroots movements but never “this quickly and with this much skill.”

It is clear @dougducey has turned his back to the students who started this movement. His school safety plan is endorsed the NRA itself and was created without input from students.

Therefore, we are giving the governor an ultimatum this Friday.