“I was shot in the back and paralyzed,” she told a small news conference at the state Capitol as Gov. Doug Ducey released a plan to address gun violence in schools. “Both of us survived our injuries, but they definitely changed the course of lives.”

Longdon, now an activist for gun safety, is running for the Arizona House of Representatives. 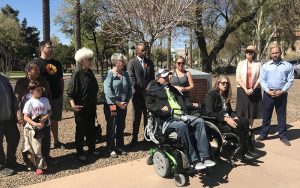 Jennifer Longdon, who was paralyzed in a random shooting 13 years ago and now uses a wheelchair, and Lawrence Robinson, (blue shirt, right) are running for political office and campaigning for stricter controls on guns. (Photo by Emily Richardson/Cronkite News)

Longdon and Lawrence Robinson, a Phoenix City Council candidate, said the governor’s plan is a good first step, but bigger strides are needed. The state should implement universal background checks, raise the legal age to purchase firearms to 21 and institute a ban on military-grade weapons and extended magazines, they said.

They also proposed adding school counselors, setting up a judicial process to temporarily remove guns from people in the midst of a mental-health crisis and making sure crime victims have adequate resources.

“I think the governor himself, and all of us know, it doesn’t go far enough,” Robinson said. “You can’t compromise with kids’ lives. We need him to act courageously here.”

Longdon said adults need to protect children from the trauma that surrounds gun violence. Her 12-year-old son was asleep in bed when he heard she had been shot.

“I’ll always remember that little face, that perfect little face, looking at me, trying to give me comfort. He was so brave and so scared,” Longdon said. “Our children should never have to be that brave. Adults need to step up.”

Longdon is running as a Democrat in District 24, which covers central Phoenix and south Scottsdale. Robinson, a Democratic activist, serves on the board of the Roosevelt Elementary School District.

Both said they’re willing to work with leaders on all sides of the political spectrum on gun-safety solutions.

“If this story is just about Democrats versus Republicans, we lose everybody that’s been shot or victimized by guns,” Robinson said. “When you’ve been a victim of gun violence or you’ve seen it in your neighborhoods or your schools, you realize it’s not a political issue, that it’s really a community solution. How many more years and deaths do we need in order to come together and put the politics aside?”