Central High School students, including Broudwin Hollett and Annalisa Holtz, lie on the floor of the Senate as part of a “die in” calling for stricter gun regulations. (Photo by Jenna Miller/Cronkite News)

PHOENIX – About 100 student activists demanding more effective gun laws staged “die-ins” across the Capitol on Friday afternoon, sprawling on floors outside the governor’s office and in the lobbies of the House of Representatives and Senate.

Activists promised to stay through the night, if necessary, until Gov. Doug Ducey met with them. The governor, whose attention Friday was on averting a statewide teachers’ walkout by urging lawmakers to give educators a raise, declined to do so.

As sunset approached, some students stayed and others left the House and Senate buildings. Five students remained outside Ducey’s office in the nine-story Executive Tower. Officials warned them three times to leave, then turned the lights off. The students remained.

Department of Public Safety officials said they would wait out the students in the legislative buildings rather than arrest them. 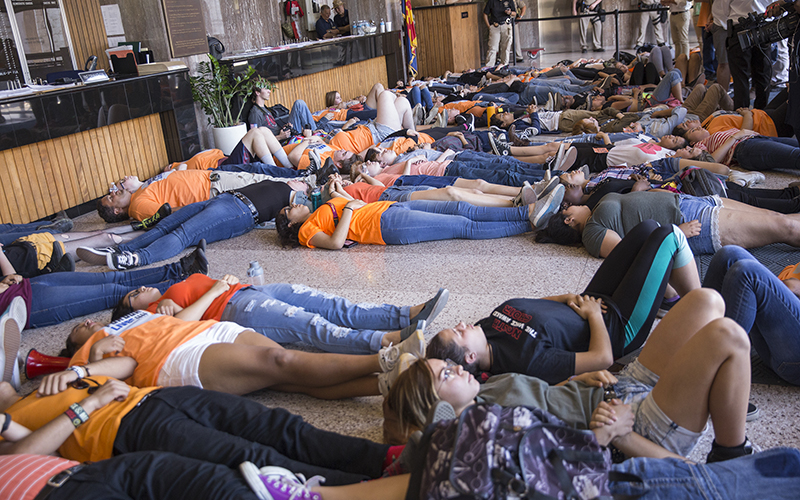 Dozens of students participated in a "die-in" at the Senate lobby. Students took turns calling out the reasons why they chose to participate in the demonstration. (Photo by Jenna MIller/Cronkite News) 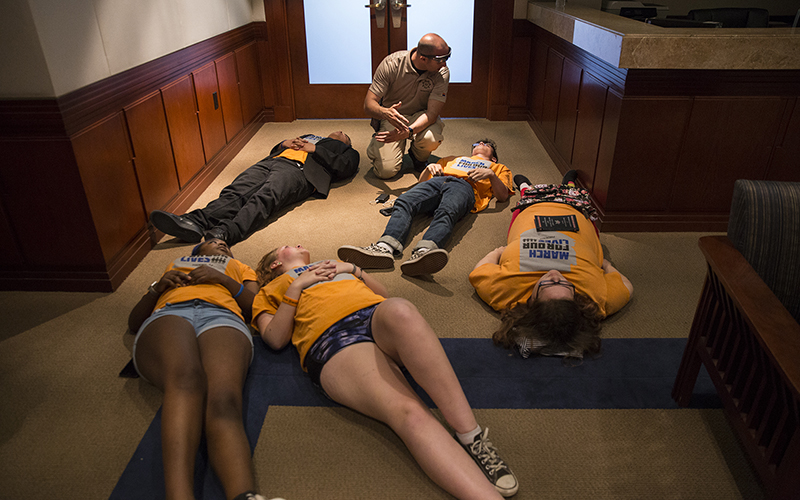 March For Our Lives student leaders lay in protest in Gov. Doug Ducey's office, accompanied by personnel from the Department of Public Safety. The students refused to leave until Ducey responds to their protest. (Photo by Jenna Miller/Cronkite News) 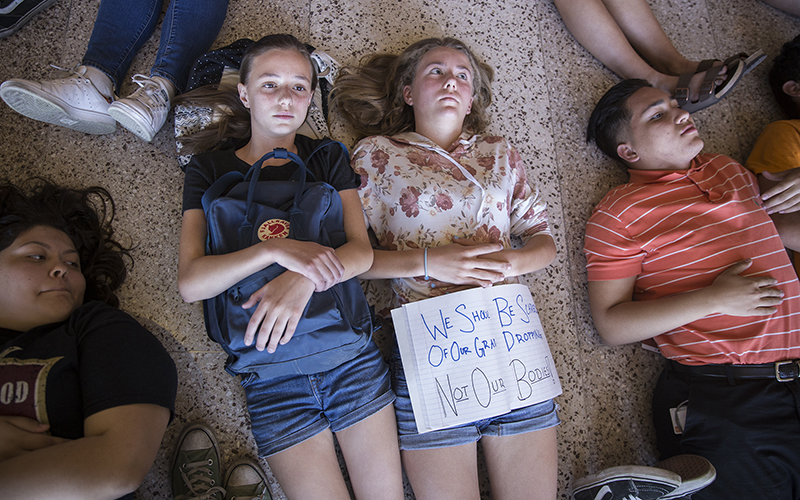 Sisters Grace, 15, and Imogen, 12, Dietz lie down on the floor of the Senate as part of a protest calling for a dialogue with Republican politicians on gun control on Friday. The words displayed on the notebook read, “We should be scared of our grades dropping, not our bodies!” (Photo by Jenna Miller/Cronkite News)

The Capitol protests came after a day of school walkouts and rallies on the 19th anniversary of the Columbine High School shooting, in which 13 people died and 20 were wounded before the two gunmen killed themselves.

Alfonso Calderon, a survivor of the school shooting in Parkland, Florida, that killed 17 students and staff on Feb. 14, came to Arizona to join in the March for Our Lives walkout and Capitol die-ins.

Calderon said he’s been to many states as part of the gun-control movement but Arizona is “the most uplifting.” 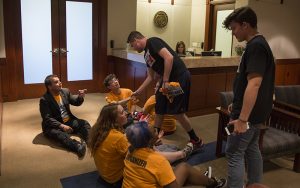 Parkland students Alfonso Calderon (Rright) and Charles Mirsky attended the school walkout and protest in Phoenix. They briefly visited the students who were staging a “die-in” in Gov. Ducey’s office, lending support and wishing them luck before leaving for the night. (Photo by Jenna Miller/Cronkite News)

“It’s the one that’s closest to home even though it’s on the other coast of the country,” Calderon said. “The gun laws are basically the same. The gun culture is just as rampant.”

Students in Arizona and across the nation walked out of their classrooms at 10 a.m. Friday, including hundreds of students from Metro Tech High School, who marched 2 ½ miles to the Capitol.

Calderon and Charlie Mirsky, a high school student at another Parkland school, marched with the Metro Tech crowd.

More than 100 students walked out of Horizon High School and marched to nearby Desert Horizon Park, chanting, carrying signs and cheering whenever passing drivers honked their car horns in apparent support.

Jett McCulloch, 16, a junior, organized the walkout at Horizon after seeing tweets on National School Walkout account and showing it to the other members of his class. He only expected about 40 students show up and was happily surprised by the larger turnout.

“We’re doing this because of the inaction of the government,” McCulloch said. “We just want our voices to be heard and let them know that we are upset with how things have been happening and how many lives have been lost too soon because of this issue, with no one doing anything about it.”

To mark the 19th anniversary of the Columbine High School massacre, students from Horizon High School walked out of class to demand stricter gun control and help each other register to vote. (Photo by Daria Kadovik/Cronkite News)

About 50 students from Empower College Prep arrived at the capitol in Phoenix chanting and yelling, led by 16-year-old Michael Turay (center, with the bandana). (Photo by Jenna Miller/Cronkite News)

"We fight in memory of all victims of violence. We fight for our brothers and sisters and we fight for the future generations, so that no one ever will have to go through this again," Horizon High School junior Tania Domenzain Vera, 17, told her fellow students. (Photo by Daria Kadovik/Cronkite News)

Students from Metro Tech High School arrived at the Capitol accompanied by some faculty and staff members. "My heart was ready to explode, I'm just so happy and proud," said counselor Kim Robinson (right). (Photo by Jenna Miller/Cronkite News)

Horizon High School students left campus and gathered at nearby Desert Horizon Park to listen to their peers speak about gun control and register to vote in future elections. (Photo by Daria Kadovik/Cronkite News)

Alfonso Calderon, a survivor of the Parkland, Fla. school shooting, marched to the capitol with students from Metro Tech High School. He gave a short speech in which he thanked Phoenix students for protesting and said they were the future of the March For Our Lives movement. (Photo by Jenna Miller/Cronkite News)

More than 100 students from Horizon High School in Scottsdale walked out as a part of National School Walkout Day to demand action on gun reform. (Photo by Daria Kadovik/Cronkite News)

Jett McCulloch, a 16-year-old junior at Horizon High School, reached out to Lane Murdock, 15, a founder of National School Walkout, to organize a walkout at his school. (Photo by Daria Kadovik/Cronkite News)

March for Our Lives leaders (from left) Jacob Martinez, Jordan Harb and Samantha Lekberg welcomed hundreds of students from Metro Tech High School as they marched onto the Capitol lawn for National Walkout Day. Students chanted, "This is what democracy looks like." (Photo by Jenna Miller/Cronkite News)

Metro Tech High School students (from left) Susan Sanchez, Itzel Valenzuela and Rosa Ortega lay down in protest on the capitol lawn. "I cannot buy alcohol until the age of 21, but I can own a gun by the end of the day if I feel like it," said Valenzuela in her speech to the crowd. (Photo by Jenna Miller/Cronkite News)

"Our voices will not be silenced. We will save America's future to make it great again," said Madison Overholt, 17, who comes from a conservative family but believes in stricter gun regulation, during her speech at the Desert Horizon Park. (Photo by Daria Kadovik/Cronktie News)

Five student March For Our Lives leaders, Jacob Martinez, Beyoncé brooks, Emma Quinlan, Jordan Harb and Dawn Motley, lay down in Gov. Ducey's office on Friday as part of a "die in" at the state Capitol. (Photo by Jenna Miller)

Once the Metro Tech students reached the Capitol, they joined a crowd of other Valley high school students. Many were clad in orange, symbolizing the gun control movement.

About 450 students gathered on the Capitol lawn, joining hands in a wide circle. They chanted together “S-T-O-P, get your guns away from me!” They held hands, chanting louder and louder as a lone counter-protester across the street screamed that they should go back to school and learn something.

After both Parkland students and March for Our Lives Phoenix organizers spoke, students attending the rally took turns telling their personal stories about guns.

There was a table dedicated to voter registration, with members from NextGen America urging attendees to register. Randy Perez, a member of the organization, told students from the stage that the only way to change things was to vote in November.