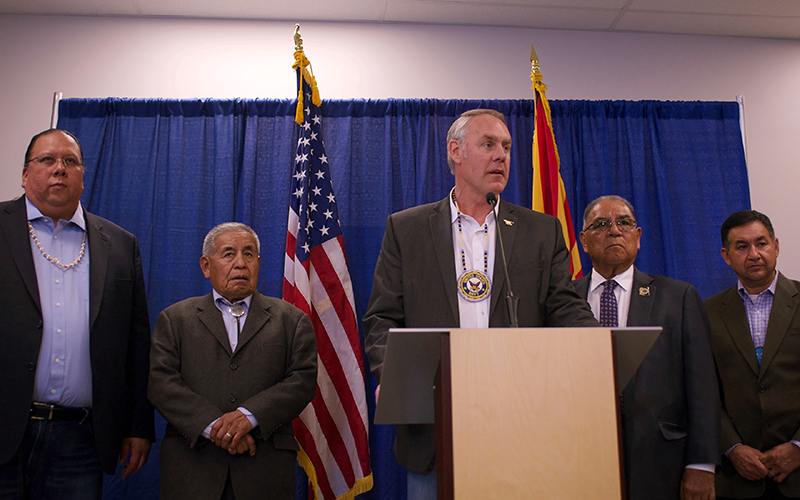 Delbert W. Ray, president of the Salt River Pima-Maricopa Indian Community (right), tells Secretary of the Interior Ryan Zinke that tribal leaders “welcome the opportunity to be a partner in this issue that affects all of the Indian community.” (Photo by Jesse Stawnyczy/Cronkite News)

SCOTTSDALE – Secretary of Interior Ryan Zinke met Monday with Arizona tribal leaders to discuss possible solutions for the national opioid crisis, which affects Native Americans more than any other minority.

Plans to end the crisis, Zinke told a news conference, include sending first-responder tool kits directly to tribes, which are sovereign nations, rather than to the state. He also said a task force on the opioid crisis is being formed and will coordinate with tribal government leaders and tribal police.

“We don’t have enough law enforcement on the border, and that’s really why we are bringing a task force on board,” Zinke said. “Letting the drug traffickers know we are serious is very important. We’re going to go after the drug dealers.”

Delbert W. Ray, president of the Salt River Pima-Maricopa Indian Community, said tribal leaders “welcome the opportunity to be a partner in this issue that affects all of the Indian community.”

Native Americans living in rural and urban areas had significantly higher rates of overdose deaths and less access to federal help than other demographics, according to the Centers for Disease Control and Prevention.

“It’s an American issue across the board,” Zinke said of the opioid epidemic, “but it tends to hit the tribes and nations much harder for many reasons.”

Each of the 573 Native American nations in the U.S. has a different culture that requires unique solutions to the crisis, he said.

“Make sure one size doesn’t fit all,” Zinke said.