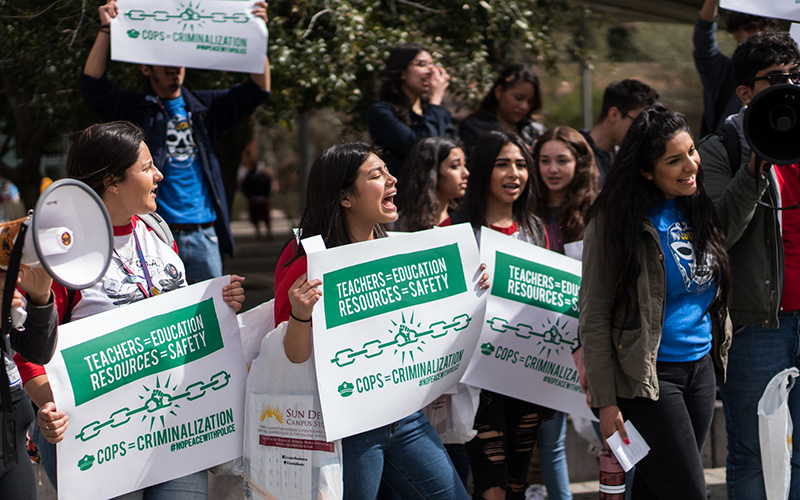 At the Civic Space Park in downtown Phoenix, demonstrators talked about their experiences with discrimination and armed police officers on school campuses, sharing their ideas on re-investing money to areas that need it more, such as teacher’s salaries and resources. (Photo by Daria Kadovik/Cronkite News) 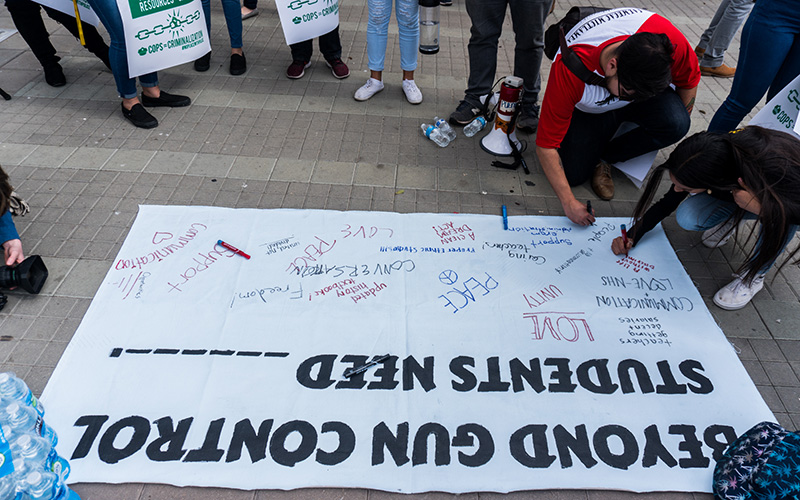 Ricardo Palomera, a teacher at North High School, and Milagros Renteria, a student South Mountain High School, along with other participants wrote down what students need beyond gun control with updated history books, conversation and decent salaries for teachers among these things. (Photo by Daria Kadovik/Cronkite News) 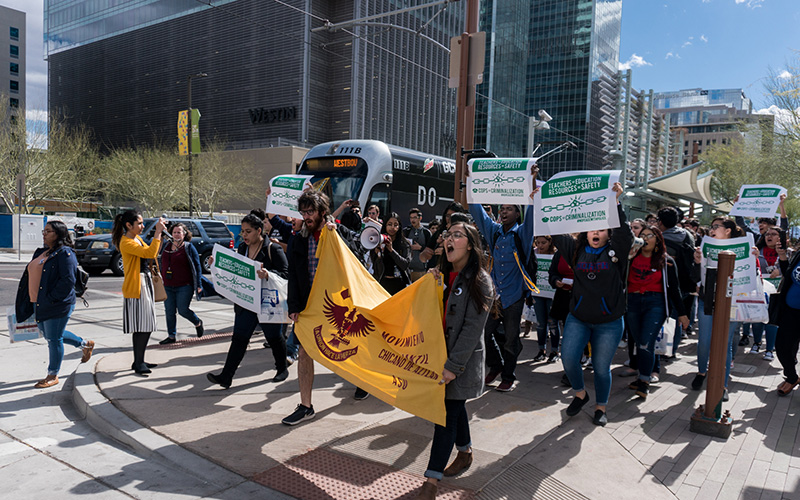 As members of MEChA de ASU and Puente Arizona marched to Civic Space Park in downtown Phoenix, they chanted: “We are the students, we are the people,” to focus the attention on issues beyong gun violance, such as other types of violence and presence of armed police officers on school campuses. (Photo by Daria Kadovik/Cronkite News)

PHOENIX – More than 100 students and activists marched through downtown Phoenix on Friday, saying law-enforcement officers placed in schools to protect students instead make them feel less safe on campus.

The protest comes just more than a week after a mass shooting in Parkland, Florida that killed 17 high school students and faculty members. The Broward County Sheriff’s Office reported the on-campus school officer did not enter the building where the shootings occurred or attempt to stop the gunman.

Some teenagers at the rally – which began at Seventh and Van Buren streets and ended at Civic Space Park – said school officers make minority students feel as if they’re being policed, not protected. Activists, waving signs and shouting slogans, called for the removal of school resource officers from Arizona high schools. 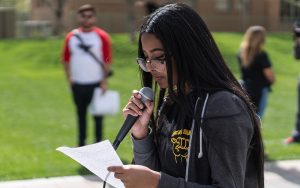 Chrisalma Enriquez, a student at South Mountain High School, wrote a poem becuase she did not know what it was like to be undocumented and discriminated against. She said she wanted to put herself in their shoes. (Photo by Daria Kadovik/Cronkite News)

“I’m here because I want to get SROs off out of my campus,” said Chrisalma Enriquez, a student at South Mountain High School who read a poem about police violence to the crowd.

“Cops on campus, they’re armed,” said Jose Eduardo, 16, another student at South Mountain. “I feel very insecure around cops with guns. It makes me feel like I’m in a jail or a prison.”

He told a story from his freshman year, saying police officers confronted him and his brother on their way home, handcuffing them and pushing them to the ground.

“They didn’t read me my rights. I didn’t know anything about my rights,” Eduardo said. “It made me want to give other people a voice.”

School resource officers, or SROs, are common in school districts in Arizona and elsewhere, placed there to protect, educate and build relationships with students and staff members.

Even as activists protested Friday, the principal of a Phoenix elementary school initiated a fundraiser to keep its school resource officer.

Cindy Campton, principal of Wilson Elementary, started a GoFundMe page because the government grant for its on-campus officer will run out in May unless the school can raise $105,000 each year for the next two years, she wrote on the site.

“We are already short teachers and now I have great teachers thinking about leaving because they’re worried about safety next year,” Campton wrote, saying the neighborhood near the school has one of the highest violent crime rates in Maricopa County. 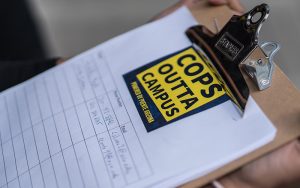 The organizers passed around sign up sheets to continue the conversation going at next week’s meeting, inviting all schools to participate. (Photo by Daria Kadovik/Cronkite News)

In her GoFundMe remarks, Campton wrote that the officer does 200 hours of law-related education, handles neighborhood complaints and runs a club for eighth graders.

But the protesters said school resource officers are not welcome.