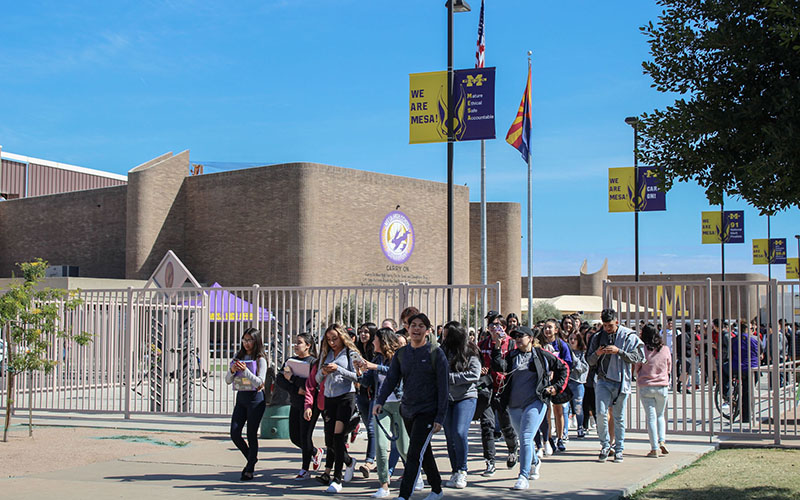 MESA – The captain of the Mesa High School basketball team started the protest on Snapchat. A 15-year-old sophomore merged the social media brainstorming into a solid plan.

At noon Wednesday, 300 students streamed out of their classes, met at a flagpole and walked half a mile to a nearby park to rally in support of stricter gun control in the wake of last week’s Parkland, Florida, high school shooting.

The protesters talked about how school conversations changed from date nights and sporting events to gun laws and funeral plans for teenagers. About how their lives had been changed by fear and activism.

“Every generation before us has tried to do something like this,” hoops captain Tyler Jackson said to cheers. “This is our mark in history.” 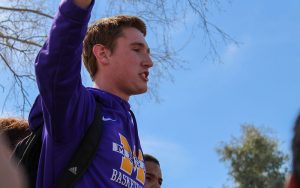 In the seven days since a former student shot down 14 students and three faculty members at Marjory Stoneman Douglas High, teenagers have taken center stage in the national debate on gun control.

Survivors of the Parkland shooting have appeared in the national news media, urging politicians to support gun control. Students in Arizona and elsewhere have staged walkouts and protests, some impromptu, some planned for the coming weeks.

Jackson, 18, said he was inspired by a tweet by the account @studentswalkout, which instructed high schoolers across the country to stage their own walkouts at noon on Feb. 21.

Monday night, Jackson posted the tweet to his Snapchat story and sent it to anyone he thought would be interested. As word spread, the students wondered what they would do once they walked out of school.

Stough suggested they head to Emerald Park, about a half-mile from Mesa High.

Snapchat vibrated with conversations. Some feared teachers would discipline them. Or their parents would be angry. Some were scared for their safety – what if someone brought a gun to the march?

Soon, both Jackson’s original message and Stough’s direction spread across the student body. Administrators caught wind of the plan and sent an email to parents, saying the school would “discourage” students from the action but could not “physically stop” them.

At noon, as directed, students met by the flagpole on campus. Then they walked. 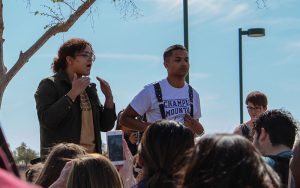 “Why does it take 17 us of to die for people to finally wake up and realize it? That could have happened to me,” Mesa High School walkout co-organizer Lea Stough, 15, told the crowd Wednesday. (Photo by Melina Zuniga/Cronkite News)

They crammed onto the sidewalk as Mesa police officers urged them to stay off the street. They held hands, their backpacks slung over their shoulders. They wore shirts bearing the logo of their high school or the colleges they hope to attend. They talked about the classes they had just left.

Once they got to the park, Stough stood on a picnic table to begin her remarks, but students were still milling around, talking to each other. Her words were swallowed in the noise.

Then Jackson climbed up next to her and the crowd fell silent. They looked up at him. He talked about the protests making history: “We can leave a mark.” 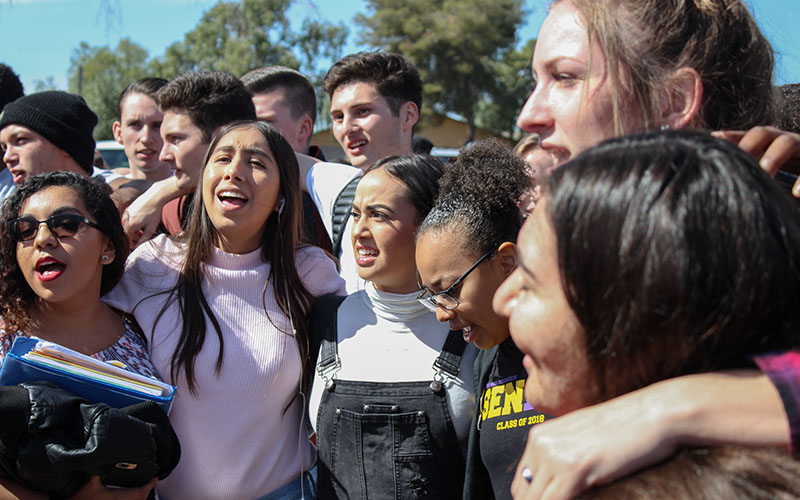 Jocelyn Lopez (center), 17, sings along to the Mesa High School fight song with her peers. “It’s important because guns are obviously hurting people,” Lopez said. “My friends and I believe the same thing.” (Photo by Melina Zuniga/Cronkite News)

Stough and another student spoke before the rally concluded with the singing of the Mesa High School fight song.

They wrapped their arms around each other and swayed. They squinted into the sun, watching Jackson and Stough standing above them. They sang.

“We’ll fight forever for the right, carry on with hearts aflame. Tradition great and mighty deeds and honor to thy name. Carry on, carry on.”

After the song, some students headed back toward school. They wondered aloud what their teachers would say when they returned during the middle of class. They called their parents, telling them about the walkout. Some parents were worried, they said, after seeing the news.

Jackson hung back, surrounded by classmates. It was his first move toward political action. He knows there are people who think he’s just a kid and that he should stay out of the gun control debate. He had an answer.

“Kids grow up,” he said. “Pretty soon, we’re going to be in the voting booth.”

Stough said the protest made her feel powerful. Still, she said, her life – and the lives of friends and students across the country – has shifted.

She’s scared of fire alarms, she said, because she’s worried a shooter will try to lure students from their classrooms, as occurred at Douglas High last week.

Her friends nodded. They all agreed they would stay in their classrooms if a fire alarm sounded. The risk was too high. 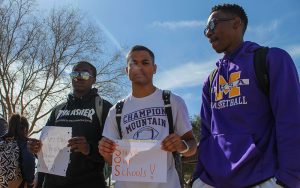 “I do have places around school that I would hide to protect myself,” Lowe said. “Places nobody would dare check because they wouldn’t think of it.”

Stough said even the familiarity of a classmate reaching into a backpack scares her.

She even has planned her funeral and given her mother the password to her social media accounts. Just in case her mom has to delete them.

And, every morning when Stough leaves for school, she makes sure to tell her mom she loves her.