PHOENIX – Members of a nonprofit environmental advocacy group on Thursday urged the public to pay closer attention to “regressive” governmental policies they say could damage the solar power industry in Arizona, and they warned against proposed budget cuts that could cripple the Environmental Protection Agency.

Tempe-based Defend Our Future, a student engagement group, held a news conference at the state Capitol to raise awareness about these policies.

The group voiced concerns about a 30 percent tariff on imported solar panels, which the Trump administration imposed earlier this year, ostensibly to protect U.S. manufacturers harmed by cheap imports. Critics suggested the tariff would hinder the solar industry by increasing prices, according to a previous Cronkite News article.

“Arizona is very uniquely positioned to be able to use solar energy,” said Nick Petrusek, the state director of Defend Our Future.

In 2016, renewable energy provided more than 12 percent of Arizona’s net generation, according to the U.S. Energy Information Administration. Although the majority of that comes from hydroelectric power, the administration noted that solar power is growing, and the state “has one of the largest solar energy potentials of any state.”

Members of the nonprofit environmental advocacy group Defend Our Future on Thursday urged the public to pay attention to governmental policies they call “regressive.” (Photo by Megan Bridgeman/ Cronkite News)

Solar energy made up 40 percent of the state’s renewable energy supply, according to the Energy Information Administration. That energy production is possible because of Arizona’s expansive desert lands and abundant sunshine.

“The EPA has played a great role in increasing availability and supporting the wider use of renewable energy and solar power, but our current policies are taking us backwards,” said Rep. Mitzi Epstein, D-Phoenix. 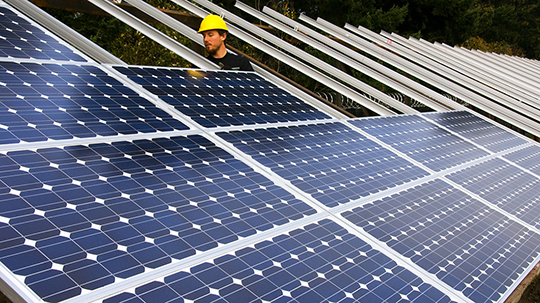 However, a representative from one local solar company said the industry is doing fine, and they’re not as concerned about the new tariff.

Joy Seitz, CEO of American Solar and Roofing, said that over the past 17 years they’ve been in business, government policies have shifted numerous times, and the latest changes will not likely affect the company’s business model.

The peak of the solar energy business in Arizona was about seven years ago, she said, and it has decreased slightly since then.

Experts agree that the state, with about 300 sunny days annually, has high potential to expand solar energy production.

“Unfortunately, what’s been going on in the past year at the federal level is keeping us stuck in the past,” Petrusek said.

The group encouraged people to reach out to their local, state and federal officials to voice their concerns.