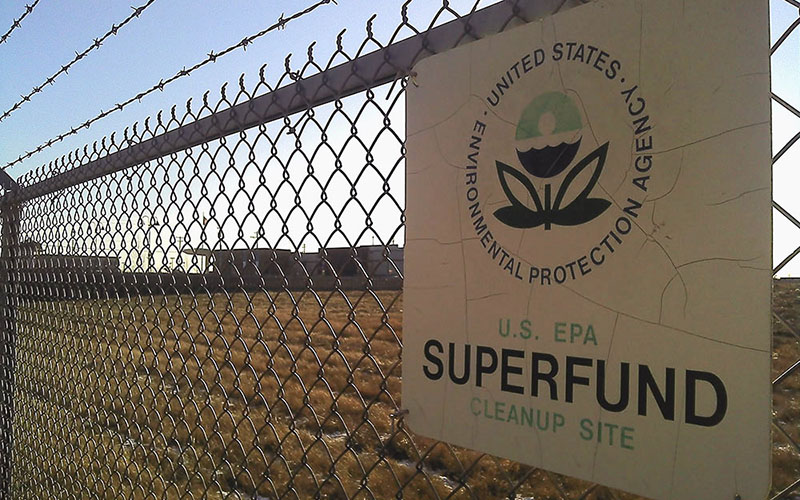 Arizona has nine Superfund sites, but advocates worry that cleanup could lag under a proposed fiscal 2018 budget for the Environmental Protection Agency that would cut the Superfund budget by a third. It’s one of several areas of the EPA budget where environmentalists say effects could trickle down to the state level. (Photo by markzvo/Creative Commons)

WASHINGTON – The Arizona Department of Environmental Quality got $315 million in funding for specific federal programs over the past five years – funding that could be endangered by proposed cuts to the Environmental Protection Agency budget.

That was the finding of an Environmental Defense Fund analysis of the fiscal 2018 EPA budget request being considered by the House this week, a budget that cuts the agency’s overall budget from $8.3 billion to $5.7 billion.

An ADEQ spokeswoman said it would be inappropriate to speculate on how pending federal cuts might affect the state agency, where it is “business as usual” for now.

But ADEQ’s budget request summary for fiscal 2019 said the federal cuts would affect the state agency’s “labor force, our pass-through funding to local government organizations” funding to private-sector organizations. Funding that EDF said will have to be made up by state taxpayers.

The EDF report, released Tuesday, identified nine EPA-funded programs that are “at risk” for Arizona, with three facing elimination and six facing funding cuts between 18 and 30 percent.

One such program is the National Priorities List, better known as Superfund. The program would see nearly $330 million cut from its current budget of $1 billion if the Trump administration’s budget request for the EPA is approved.

Arizona has nine Superfund sites, toxic sites the government has agreed to clean up. Losing a third of funding to the national program would trickle down to Arizona, which got $8.7 million in Superfund funding from fiscal 2012 to 2016, the EDF report said.

Elgie Holstein, senior director for strategic planning at EDF Action, said those cuts would be followed by the “gradual slowdown or halt in cleanup of Superfund sites and sites with hazardous materials, as well as brownfields sites.”

The program has been worth about $30 million since fiscal 2012 to Arizona, a state where the Navajo Nation has long struggled with funding to clean up abandoned uranium mines.

While those programs face cuts, other programs like the Nonpoint Source Pollution Implementation Grant face elimination altogether. Arizona got $10 million from the program over the last five years to “control pollutants carried by rainfall runoff into its drinking water, rivers and lakes,” the report said.

Funding could also be eliminated for a program that helps monitor and prevent leaking underground fuel storage tanks – called LUST, for Leaky Underground Storage Tanks – and a separate program that supports human health and safety research.

Federal funds for air-quality monitoring would also face a cut of up to one-third. The Clean Air Act Grants have gone to ADEQ, Maricopa and Pima counties, and four Arizona tribal authorities.

Holstein said the effect of losing that funding would be felt quickly, with more “code red days,” or days where it is recommended that kids stay indoors because of poor air quality.

“Air quality cuts would be the most immediately visible,” he said. “It would affect people whose children have been diagnosed with asthma, or heart disease.”

Miles Keogh, the executive director of the National Association of Clean Air Agencies, said he is not familiar with the methodology of the EDF report. But he agreed that “cutting funding to state and local agencies that promote clean air and public health is likely to diminish their ability to do so.”