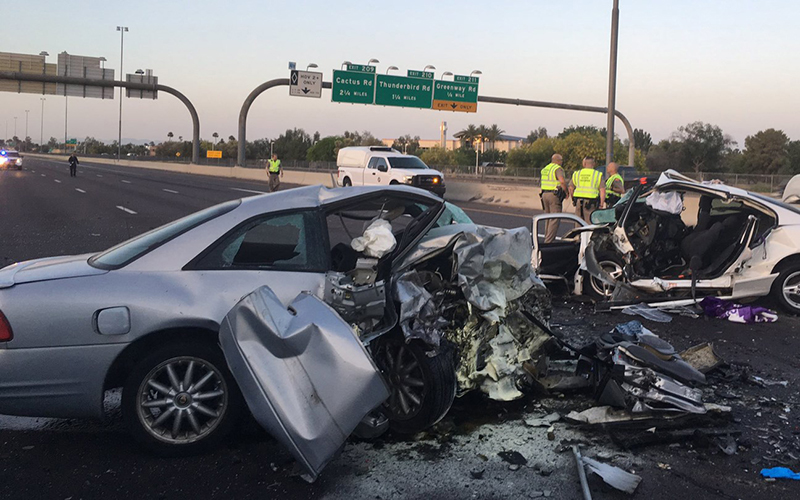 PHOENIX – Lawmakers are working on several bills designed to stop wrong-way driving as public officials remain frustrated at the emotional and financial cost of crashes.

The bills include adding road spikes and toughening the penalty for wrong-way driving to an automatic felony.

In January, seven motorists were arrested for wrong-way driving compared with 10 arrested in January 2017, but wrong-way collisions last month were deadly: Four people died in two wrong-way crashes on Interstate 40 near Flagstaff.

Drunken motorists are the main cause of wrong-way driving, said Alberto Gutier, director of the Arizona Governor’s Office of Highway Safety.

“When it comes to wrong-way driving, how do you prevent it?” Gutier asked. He said it’s difficult to talk sense into someone who has been drinking all night and, instead of calling a taxi or a friend, starts driving on the wrong side of a freeway.

“The actions are so horrific, (and) collisions are so violent,” said Frank Milstead, director of the Arizona Department of Public Safety. “It’s not just like a normal DUI event where you’ve been stopped by a trooper for driving on the freeway or the roadway impaired.”

Government agencies are spending millions to combat the issue.

The Arizona Department of Transportation has set up thermal cameras at off-ramps throughout the state to warn DPS troopers about potential wrong-way motorists. The agency also installed illuminated road signs to warn motorists if a wrong-way driver is ahead.

“It’s a very, very costly thing,” Gutier said. “ADOT invested $3.5 million on thermal cameras, and hundreds and hundreds of thousands in the signage.” 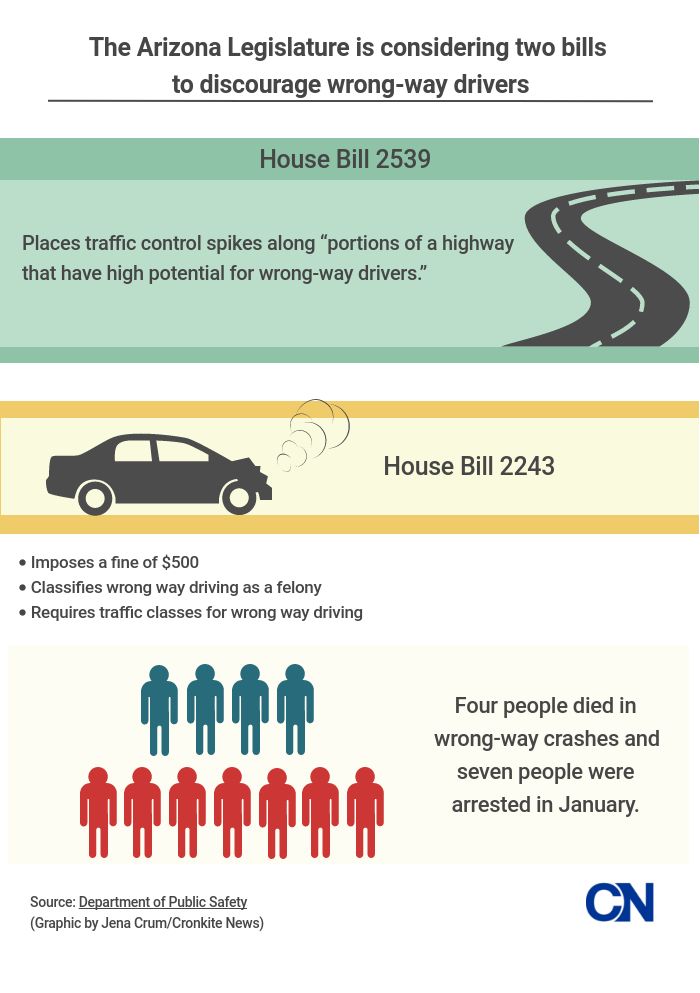 The cost of fighting wrong-way driving goes beyond dollars.

“After having spent all of my adult life trying to combat this phenomenon, it is a huge frustration because of the toll it takes on families, the communities (and) the people I lead,” Milstead said. “I don’t know when the last time was you saw somebody killed, but it’s hard to look at. And looking at it over and over again takes a toll on my staff.”

Gutier, who went to the scene of the crash, was shaken.

“Seeing what happened and seeing the victims, the circumstances,” Gutier said, recalling those moments. “And then, afterwards, learning that the guy was super, extreme DUI. It really woke me up.”

In his annual State of the State address in January, Gov. Doug Ducey challenged legislators to come up with stricter wrong-way driving laws and lasting solutions to protect Arizona drivers.

In his 2018-19 state budget proposal, Ducey recommended adding six DPS troopers and creating of a “night watch” patrol to focus on wrong-way drivers.

“You’d think it was obvious by now, but to anyone out there who hasn’t gotten the memo: Booze, drugs and driving don’t mix,” Ducey said. “Your actions are beyond foolish – they are lethal. And we will not tolerate it.”

One of the bills making its way through the Legislature would make wrong-way driving an automatic felony, regardless of whether the driver causes a crash.

Under current law, wrong-way drivers who cause a crash or are stopped by a trooper face the same DUI penalties as any other impaired driver, with penalties ranging from prison time to a $500 fine. Some wrong-way drivers have been cited for a misdemeanor, Gutier said.

A committee passed the bill in early February but a full House vote has not been scheduled.

Installing road spikes on several heavily trafficked highway off-ramps to “shred the vehicle tires of any wrong-way driver” also is being considered.

That proposal, from State Rep. Michelle Ugenti-Rita, R-Scottsdale, would require ADOT to deploy the spikes. But Gutier said such an extreme solution could cause more problems than it solves.

“First responders come in the wrong way sometimes to respond to a crash,” he said. “So if you have (spikes), there has to be a mechanism so that they stay down.”

The spikes would have to point straight up to stop wrong-way drivers, but that could cause problems for law-abiding motorists, Gutier said.

Milstead said the proposed legislation isn’t enough; awareness and responsibility is key to changing the culture. People need to make the issue a priority to reduce the number of deaths and injuries from wrong-way driving.

“If we continue to ask for compliance from society and ask for more people to get behind the idea of compliance, then more people will adapt to that,” he said.