Nearly 80 people have been injured and 14 people killed in wrong-way crashes this year, according to the Arizona Department of Public Safety.

Maria Wojtczak, owner of Driving MBA in Scottsdale, said she and her husband, Richard, created a wrong-way simulation to prevent tragedies like two sisters killed on a Valley freeway in April.

“We introduce them to a lifetime of horrible events that could potentially happen out there,” Maria Wojtczak said. “Hopefully, they will never encounter them.”

She said many drivers, faced with the prospect of a car hurtling toward them on a freeway, react in a panic.

“Their immediate reaction is to stop and in most cases putting your foot on the brake is the wrong answer,” Maria Wojtczak said.

“What you want to do is lightly tap your brakes to let drivers behind you know you’re about to pull over and stop,” she said. “When the coast is clear, pull to the furthest right hand lane, turn off your engine, keep your lights on and immediately call 911.”

Richard Wojtczak, a former software specialist for Ford who designed the wrong-way simulation, said drivers need to listen closely to traffic around them. For every minute or mile driven, a driver should check the rearview mirror and look to their left and right for a minimum of three seconds. 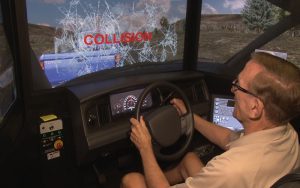 “Statistics have shown and studies have shown that wrong-way drivers tend to stay on what they believe is the right-hand side, so as they are driving the wrong-way they are actually driving generally in the HOV lane,” Lee said.

The state launched a wrong-way driving detection system after sisters Karli Richardson, 20, and Kelsey Richardson, 18, were killed on Interstate 17 near Greenway Road in April. Law enforcement officials said Keaton Allison, 21, was driving a car the wrong way on the freeway that collided with the sisters’ car. Allison was also killed.

The agency also has lowered signs on Arizona highways and made the signs larger and brighter.