PHOENIX – Medical-marijuana businesses and advocates oppose a bill that would make it a felony to publish unverified information about dispensaries, saying it’s an effort to block business.

Sen. David Farnsworth, R-Mesa, sponsored a bill to punish any “listing or menu service” in Arizona that publishes information about a dispensary without verifying its registration and address. Opponents said the bill, along with others Farnsworth has recently introduced, would violate the First Amendment and limit important information for patients of medical marijuana.

Under Senate Bill 1060, any company that publishes contact or product information for a dispensary without an official registration certificate would be guilty of a Class 6 federal felony, punishable by a minimum fine of $10,000.

Publishing any address for a dispensary that differs from the address on a dispensary’s registration certificate would be an equally punishable offense. 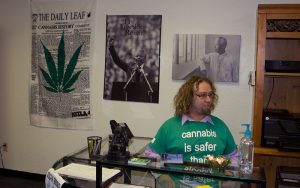 David Wisniewski is chairman of Safer Arizona, a pro-marijuana political-action committee that is trying to get recreational marijuana on the 2018 ballot. (Photo by Faith Miller/Cronkite News)

Farnsworth’s “attempt to censor the Arizona press (is) a brazen and shameful act that would make any dictator proud,” according to a statement from AZmarijuana.com, a website that provides news about the marijuana industry in Arizona.

Farnsworth did not respond to several emails and phone calls requesting comment.

Medical marijuana has been legal in Arizona since 2010, when voters narrowly approved Proposition 203. The state now has about 100 dispensaries.

Medical-marijuana sales statewide topped $340 million in 2016, according to a report from the National Cannabis Industry Association. But dispensaries are cash-only, as marijuana remains listed as a Schedule 1 drug under federal law – putting it in the same category as heroin, LSD and Ecstasy.

Jaryd Neibauer, who works in photography and marketing at the Nirvana Center dispensary in west Phoenix, said the legislation is driven by false ideas about the medical marijuana industry.

“I think the stigma attached to medical marijuana (has) been around a long time. I think it still
exists and people are kind of afraid of what they don’t know,” said Neibauer as customers withdrew money from the in-house ATM. “It’s strange. I don’t know why we would have this program and not be able to advertise for it. It brings money to the state.”

As he spoke, employees provided information about various strains of marijuana, with such names as Chocolate Hashberry and Blue Haze, to customers exploring display cases loaded with THC-infused candy, baked goods and “shatter,” a concentrated form of marijuana that looks like amber-colored shards of wax.

Safer Arizona, a pro-marijuana political-action committee that is trying to get recreational marijuana on the 2018 ballot, opposes legislation they contend restricts marijuana businesses.

“Anybody should be allowed to say ‘This store is open’ if they’re open for business,” said David Wisniewski, the organization’s chairman. “It’s the burden of the state to see if they’re a legal business or not.”

A 2016 ballot measure to loosen the limits on recreational marijuana use failed. Opposition and support generally fell along party lines, with Gov. Doug Ducey and a crowd of Republican legislators against the measure and Democratic U.S. Reps. Raul Grijalva and Ruben Gallego supporting legalization for people older than 21.