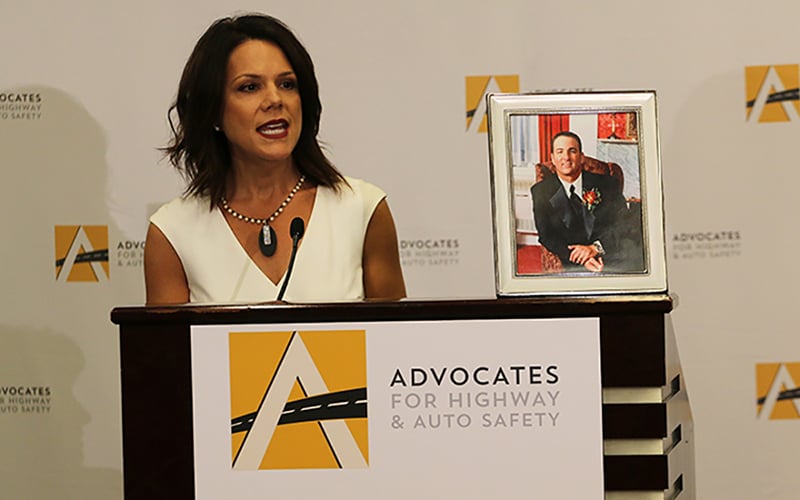 Melissa Wandall, president of the National Coalition of Safer Roads, said the 2018 Roadmap of State Highway Safety Laws should serve as a wake-up call to legislators to quickly adopt the laws outlined in the report and not “wait until tragedy strikes your family.” (Photo by Kyley Schultz/Cronkite News) 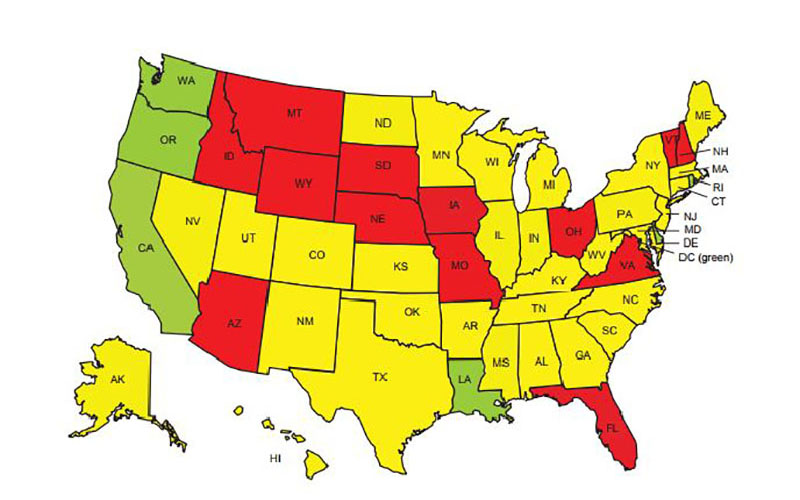 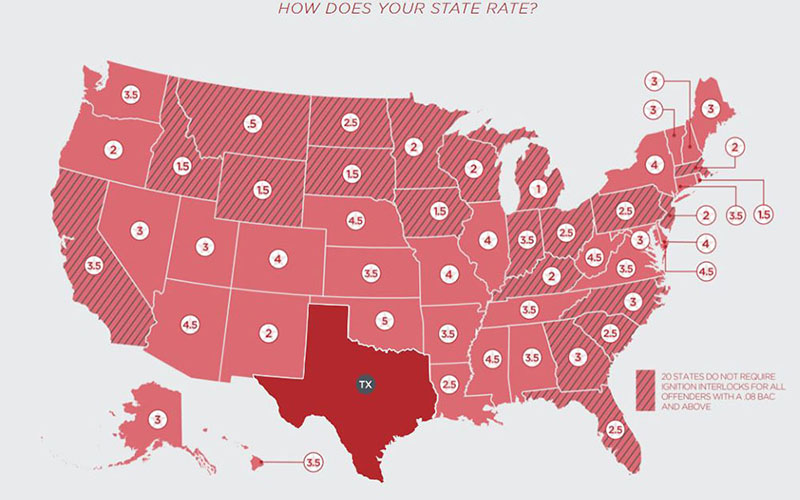 State officials said the Advocates for Highway and Auto Safety failed to consider areas were Arizona is among the best in the country. They pointed to a MADD report, for example, that gave the state 4.5 out of 5 points for its drunken driving laws. (Map courtesy Mothers Against Drunken Driving)

WASHINGTON – Arizona was one of the worst states in the country for highway safety in 2017, based on the state’s comparative lack of driving-safety laws, according to a national report released Monday.

The 2018 Roadmap of State Highway Safety Laws, by Advocates for Highway & Auto Safety, ranked states according to 16 laws, including requirements for seat-belt use, distracted-driving restrictions and graduated licenses for teens.

“It makes no sense that the common solutions provided in this report are not embraced by lawmakers and acted with urgency,” Melissa Wandall, president of the National Coalition for Safer Roads, said Monday at a news conference to release the report. “You don’t have to wait until tragedy strikes your family when we have the safety solutions at hand.”

Arizona met just four of 16 criteria set by Advocates for Highway & Auto Safety, landing it near the bottom of states for highway safety. (Graphic by Kyley Schultz/Cronkite News)

But Alberto Gutier, director of the Governor’s Office of Highway Safety, challenged the report, saying its authors “need a reality check.”

Gutier said the report once again fails to take into account the growing number of drivers on Arizona’s road – up more than 700,000 in the past eight years – and overlooks highway policies where Arizona is among the nation’s best.

“Technically we rank at the bottom of their certain criteria, but they don’t take in account specific laws that impact our state more than others, such as reckless driving, DUIs and speeding,” Gutier said.

He pointed to other rankings, such as Mothers Against Drunk Driving’s 2017 Report to the Nation that said Arizona’s ignition interlock system remains “one of the best in the country” and was one reason drunken driving deaths in the state fell 32 percent since 2007.

“MADD ranked Arizona an almost perfect five stars for how we handle our drunk driving problem, which only four other states in the country were awarded,” Gutier said. “We’re one of the few states to draw blood and switch away from relying solely on breathalyzers, which aren’t as accurate. We’re leading the country in this, but where is that in the report?”

Arizona has finished near the bottom of the Roadmap rankings for at least five years. Arizona was one of 13 states to get a “red” rating for its lack of such mandates as motorcycle helmet requirements and rules aimed at distracted driving. Arizona’s ranking tied Missouri and Montana, and trailed only South Dakota and Wyoming.

Until Arizona enacts a primary enforcement law for both front-seat and back-seat passengers, it will not be able to get the “green” rating that seven states received from Advocates for Highway & Auto Safety.

Other shortcomings for the state, according to the report, included a lack of supervised-driving requirements and mandating a minimum age of 16 for learner’s permits.

Wandall called on states to adopt comprehensive teen-driving laws, calling the report a wake-up call for lawmakers who are looking to narrow current policy gaps.

“It is critical for a novice driver to gradually gain driving experience under safer conditions, some of these conditions including restrictions on the number of teen passengers and a minimum of 50 hours of supervised driving,” Wandall said.

But Gutier said those decisions have to be made by legislators, who have balked repeatedly.

“There is no question that laws preventing texting on the road and increasing helmet usage for motorcyclists will decrease fatalities,” Gutier said. “You just don’t see any intention in the Legislature that can make it through and be implemented anytime soon.”

The report said there were 962 fatalities on Arizona roads in 2017, up from 897 the year before, with an economic impact of $4.2 billion last year.

Despite Arizona’s consistent ranking near the bottom in the report, Gutier is optimistic that the cooperation of local authorities, as well as increased funding for the state Department of Transportation’s Crash Records Unit and revised report forms, will improve road safety in coming years. The Governor’s Office last year awarded a $389,520 grant to the Crash Records Unit to help in that effort.

“We have a strong relationship with our officers and work closely with them to make sure the report forms they use are not only accurate, they are efficient,” Gutier said. “We’ve cut down from multiple-page reports with useless boxes to more user friendly forms that no longer take 30 minutes to complete.

“We have a long way to go in some aspects but, no, we are not as hopeless as one might think. I have full faith that everybody involved with our state will perform to the best of their abilities.”