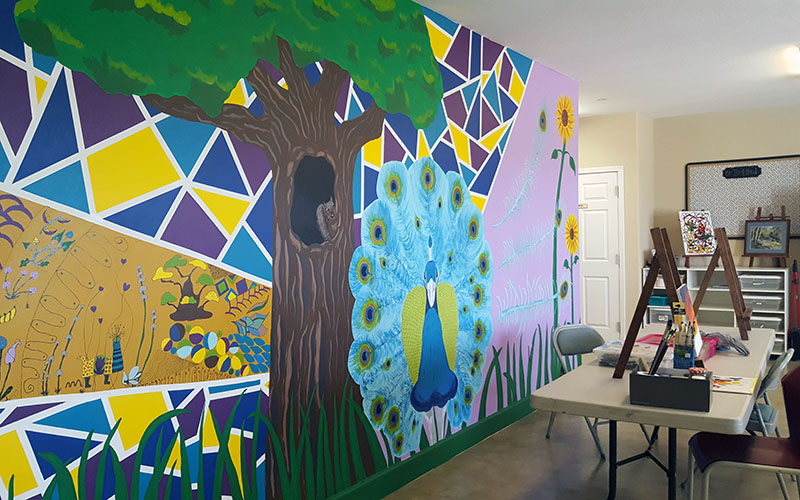 Marisa Richmond and La Loma Village residents painted this mural to honor the late Julia Sweeney, who played a significant role in bringing art to the assisted-living center. (Photo by Alyssa Williams/Cronkite News) 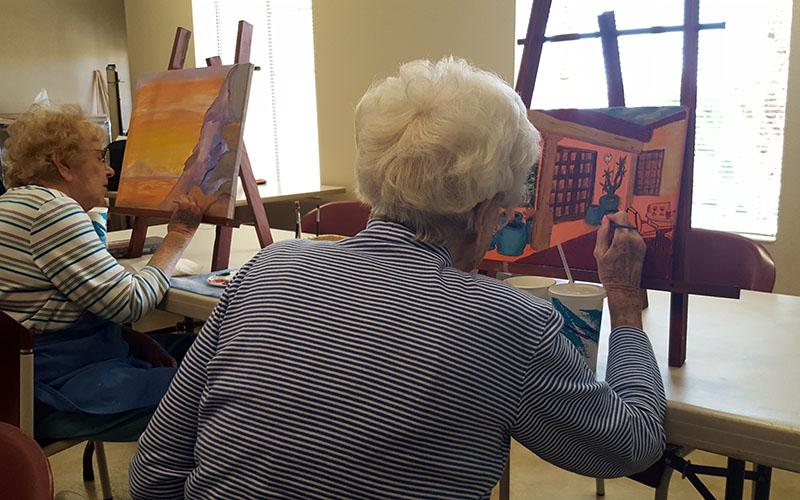 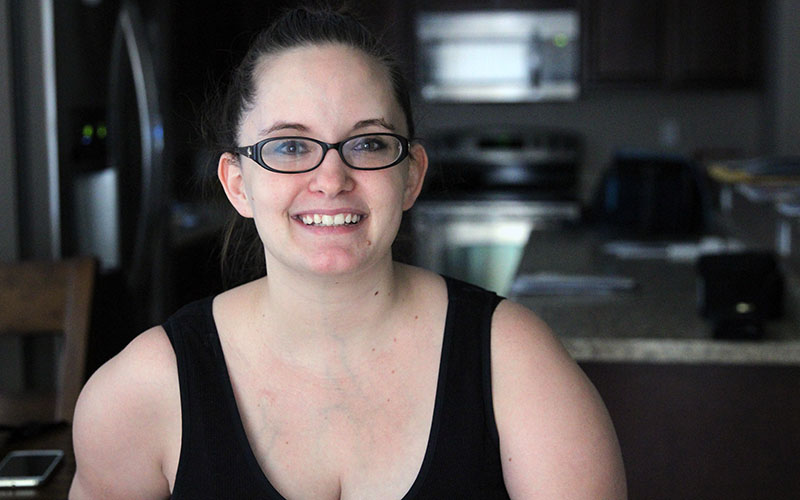 PHOENIX — Every time Catherine Baimonte visited her mother at an assisted-living facility in Colorado, her mother’s health worsened.

Baimonte, a retired Avondale teacher, remembers one of those visits. Her mother forgot how to shower.

Do you need help? Baimonte asked. She stepped in and out of the shower to help. 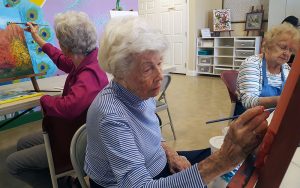 Theresa Turpin, 86, a resident of La Loma Village, said the best part about the program is being with great friends and letting worries go. (Photo by Alyssa Williams/Cronkite News)

“Finally, we got out, dried off and I let her dress herself,” Baimonte said.

Her mother, Kathleen Baimonte, made it halfway through, then stopped. She sat there.

I don’t know what I’m doing, she answered.

Another sister who dropped by later asked their mother if she had showered. She said no.

Three months after Kathleen turned 99, after struggling with her memory those last few years, she died.

“When you get that old, I don’t care who you are, you have a mess of problems,” Baimonte said.

Health issues are taking the backseat now with various medical advances, such as stem-cell research, medicines and vaccines and bionic limbs prolonging life, according to a 2013 CNN article.

In a 2013 survey by Pew Research Center, those surveyed had mixed opinions on whether an extended life equated to a life of high quality.

About half of respondents who think medical advances are good say life extension would be good for society, but about 25 percent of respondents felt advances were bad because they interfere with the natural cycle of life.

By 2050, people could live to 120 years, Pew researchers said. An intensive-care nurse said prolonging life often is a matter of advanced technology.

Hannah Lobato, a registered nurse at Abrazo Hospital West Campus, said she saw at least one new older person among her ICU patients each week.

“If we have to put a patient on life support, it most usually equates to a poor quality of life,” Lobato said. “The families are the ones who tend to make the decision to keep them on the machines, and it’s only because they don’t want to be the ones who killed Grandma.” 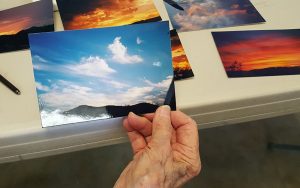 Marilyn Pyle carries a camera with her to photograph Arizona’s scenery, which plays a central role in many of her paintings. (Photo by Alyssa Williams/Cronkite News)

Hospital inpatient charges, on average, can exceed $6,200 per day, and costs to maintain someone in an intensive-care unit can reach up to $10,000 per day. Skilled nursing facilities are reimbursed at a rate of approximately $622 per day through Medicaid plans, according to America’s Debt Help Organization.

Medical technology often acts as a mask, Lobato said. Bedside monitors show a patient’s heart beat, blood pressure and other measures of a health condition in the moment. Doctors and nurses are striving to keep a patient alive.

“All those pretty numbers on the board, we’re making,” Lobato said. “If we take away that life support or medication, then those numbers show their true health.”

Five years before moving in with Lobato’s mother, Michele Kruser, Childs was not taking her prescribed medication. Her health deteriorated.

But Childs’ health improved after she moved in with her daughter. 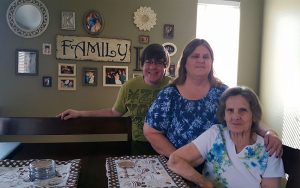 “When she first came to live with me five years ago, she could barely take a few steps with a walker,” Kruser said. “We fixed that with daily activity. Within a year, she was able to finally walk without the walker.”

Kruser said the transition was an adjustment, but the family worked toward the mother’s health every day.

Childs, who has passed all her recent medical exams, is ready for whatever happens.

“I don’t take a lot of things real seriously,” Childs said. “I make sure to keep a positive outlook on life, but what comes, comes.”

Kruser is researching adult day-care facilities that will offer games, arts and crafts, conversation and skills, such as cooking, to stimulate her mother’s brain and keep her active.

Research has shown physical, social and mental activities help with the longevity of life.

Retirement and assisted-living centers like La Loma Village in Litchfield Park are going beyond stereotypical activities like bingo and Parcheesi to offer classes on elder law, history and the fine arts.

“We try to make sure everyone can maintain the skills they came with, learn new skills and find real meaning and purpose,” said Kari Curry, life-enrichment director at La Loma. “A life without purpose is not a life well-lived. Purpose contributes to our longevity.”

In a recent class, Marilyn Pyle, an 83-year-old La Loma resident, painted a scene from a photo she took, which included trees and mountains. 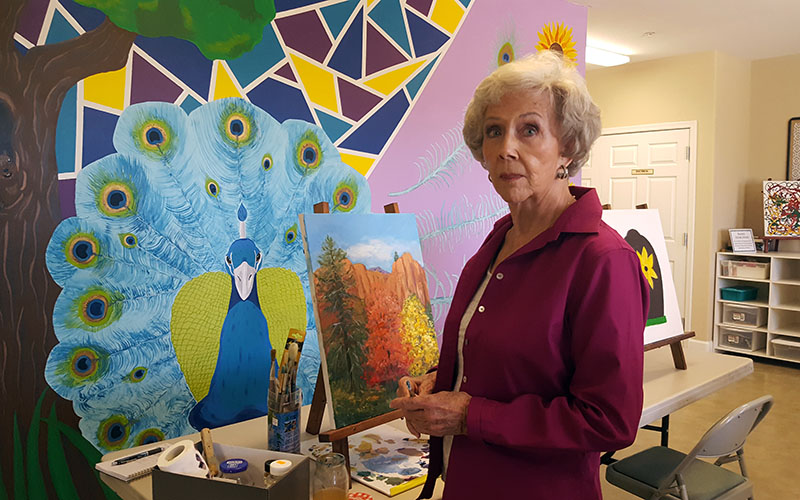 Marilyn Pyle, 83, who lives at La Loma Village, said residents there have wonderful space to work on their art in the facility's studio. (Photo by Alyssa Williams/Cronkite News) 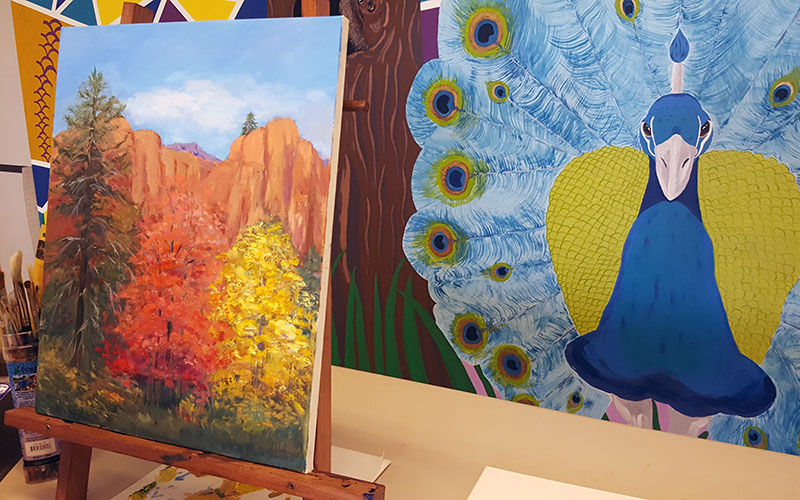 “Art is a great outlet. We have time to come and paint what inspires us, spend time with our friends,” Pyle said. “It’s also a great brain stimulant, and at our age, that’s important.”

Catherine Baimonte said her mother lived for nearly a century because of family.

She wrote to her mother every week and called every Sunday. Her sister, Betty, came by daily to take their mother out.

“You have to become the stimulator. Start a conversation. Tell stories. Initiate outings,” she said.