In an interview with Cronkite News, Williams talked about community and racial dynamics under her command.

On her relationship with diverse communities:

“I try not to make it a big deal, but it becomes a big deal or something of great significance when I’m out walking down the street and people want pictures, when people who are sitting in audiences are weeping with joy because they feel so blessed to have me as a representative because of who I look like and who I am … probably more so, who I am than what I look like.”

“As a kid growing up in West Phoenix, and I married a guy who was born and raised in South Phoenix, we’ve always been very connected to the community.”

“And it’s still, too many, so baffling that I’m as approachable as I am.”

“When we go to community events, you literally see every ethnicity, gender, sexual orientation, faith, you name it. You don’t just see that in the community, you see that in the officers, too.” 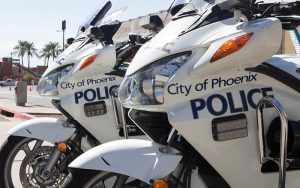 Phoenix has nearly 3,000 sworn positions, and it’s trying to fill 400 by the end of the year. Native American, black, Latino and Asian officers account for about 26 percent of Phoenix’s sworn police force, according to data provided to Cronkite News. (Photo by Jasmine Spearing-Bowen/Cronkite News)

“I know for a fact that we are an ‘A’ on trying to reach out and engage the community. So much so … part of our policing plan is community engagement and outreach because it’s so big.”

“So, people have to feel as if their voices are heard, and it’s more than just an extension of the community. It has to be an extension internally, too. So, one of the focuses that I had when I started was creating legitimacy, for lack of a better term, both internally and externally.”

“When my people or my officers or my employees feel as though their voices are heard internally, they make way better product and service delivery to our community. I literally spent the first year trying to build that.”

“I just bring so many different hats to the table that people are very comfortable with me. So I can come in with a uniform, and they see the uniform, but then they quickly see Jeri versus Chief Williams.”

Her advice on officer transparency:

“Every time you make a stop, every time you make contact, just keep in mind that you’re probably being videotaped because you probably are. Do you want to be the next person on the YouTube website that did something inappropriate or wrong because it’s going to be all over the place here?”

“If we can be known as an agency that’s accountable and transparent, regardless of whether you like police or not, then I think that we have done our job.”

On being the first female chief:

“When I was applying to be police chief, in my mind, me being female was secondary. The idea and notion of being the best police chief is really what I was looking for. The fact that I’m the first female does bear some weight and some burden because if I mess up, who knows if there will be another female.”

“The blessing and beauty is that I had so many women who came before me. All these ladies had to go through some very significant dynamics to be accepted in policing.”