The Rev. Bob Larson says he performs exorcisms daily both in person and over Skype. (Photo by Allison Bailey/Cronkite News)

Exorcisms, the religious practice of driving the evil spirit or demon out of someone who is believed to be possessed, are on the rise, according to the National Catholic Register.

“If Mother Teresa can have a demon, anybody can,” said the Rev. Bob Larson, an Arizona-based, self-described Protestant exorcist. “People think if you have a demon, you must be an evil person. When I came back to America (after traveling), I started looking for it here, and I found it pretty quickly. There was a lot of evil.”

Not everyone is a believer. Maureen McAllister, the proprietor of the Facebook page “Bob Larson is a Fraud,” said multiple members of her Facebook page have caught Larson exorcising the same woman in different cities.

“He has a life of lying,” McAllister said via Facebook message. “He now claims in his recent book to be a doctor. … I wouldn’t be surprised if his doctoral degree he (gave to) himself from his (exorcism) school.” 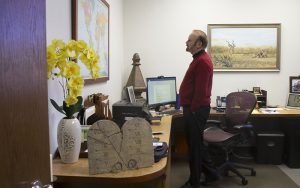 Arizona-based exorcist the Rev. Bob Larson said he has performed exorcisms in countries around the world. (Photo by Allison Bailey/Cronkite News)

In 2013, Larson founded the International School of Exorcism, an online training institution, because he said he saw an increasing need for modern-day exorcists.

People can purchase the school’s courses as a bundle to include all three levels of the program for $500 or $995 for each individual level.

Since its start, the school has graduated nearly 1,000 people, Larson said.

Larson estimates that he has performed thousands of exorcisms and believes half of the world’s population has demons.

“The people in the (Roman) Catholic Church who say that exorcisms are rare, don’t do exorcisms,” Larson said. “The reality is, if you talk to priests and active ministry, they will tell you it’s not rare and that the church is scrambling to train and find enough exorcists to meet the need.”

The Roman Catholic Diocese of Phoenix declined to comment on the issue, and Larson has many skeptics who question his credibility.

Larson has made numerous television appearances, including those featuring Anderson Cooper, Oprah Winfrey and Dr. Phil, each of which have given him a platform, but also included those who discredit him.

“People can say whatever they want to say about me,” Larson said. “If you do what I do, it’s controversial – of course it is. There are going to be those who try to discredit it, but I know my calling. I know what my responsibility is, and I have a deep desire to do this.”

On Larson’s website, it says a Skype encounter costs $395.

“He just adapted an old sensationalistic trick to get poor naive suckers to pay nearly $300 per hour for what is, in my opinion, his version of role-playing therapy,” McAllister said via Facebook message. “Some people want to believe their problems are caused by demons and he, in my opinion, intentionally mislabeled metaphorical demons for metaphysical demons.” 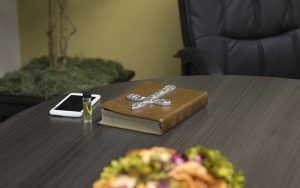 Scottsdale-based the Rev. Bob Larson’s exorcism tools include the “Cross of Deliverance,” a Bible and a vial of holy water. (Photo by Allison Bailey/Cronkite News)

Larson said there is no such thing as a typical exorcism. However, in all of Larson’s in-person encounters, others restrain the possessed person for safety reasons.

Larson, who is affiliated with the Spiritual Freedom Church and once hosted a radio talk show called “Talk Back,” believes “if Christ were here, he would use Skype.”

Larson said he will continue his efforts to extinguish demons from the world’s population and doesn’t expect the number of exorcisms he performs to subside.

“This phenomenon is very much a part of church life,” Larson said. “This is more than spinning heads and spitting green pea soup. … It’s not going away anytime soon.”