Route 66 once stretched unbroken from Chicago to Santa Monica, California, and reflected teh importance of the automobile in 20th century American life. But it was overtaken by the interstate highway system and today only small stretches remain, like this one in Oatman. (Photo by Vicente Villamón/Cronkite News.) 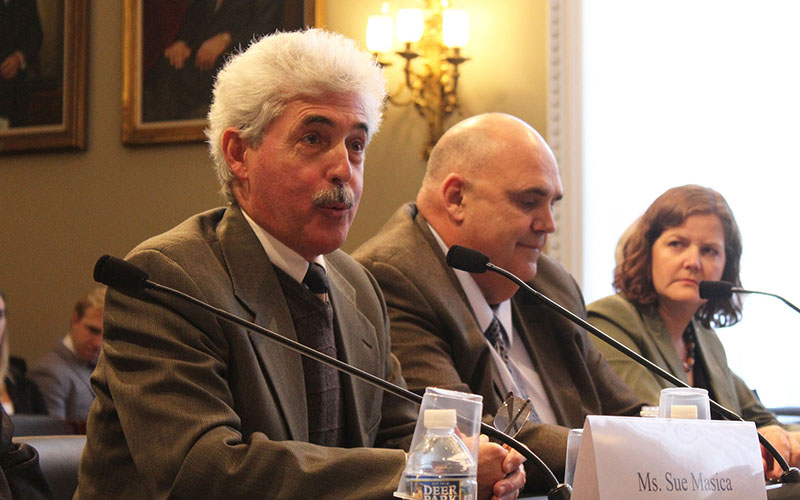 Bill Thomas, chairman of the Route 66 Road Ahead Partnership, said tourism on the “Mother Road” has brought millions in economic development and created thousands of jobs in towns along the 2,400-mile route. He said those numbers could be boosted by a proposed historic designation. (Photo by Isaac Windes/Cronkite News)

WASHINGTON – Anyone who doubts the lure of Route 66 should talk to Winslow Chamber of Commerce CEO Bob Hall, who said that capitalizing on the historic highway was key to revitalization of the historic downtown.

“Fifteen, 20 years ago the population was dwindling and we decided we had to do something,” Hall said. “We decided to fix our historic downtown, which is Route 66 – and we really saw the difference.”

Lawmakers in Washington hope to repeat that success with a bill that would put Route 66 on the road to becoming a National Historic Trail.

The bill, heard Wednesday by a House Natural Resources subcommittee, would put the more-than-2,400-mile road under the care of the National Park Service, returning signage to the road and letting it appear on maps as a historic road, among other changes.

Bill Thomas, chairman of the Route 66 Road Ahead Partnership, told the committee that the road, sometimes called the “Mother Road,” has an important place in 20th century U.S. history.

“In the 1920s, it exemplified freedom and movement,” Thomas said after the hearing. “In the 1940s, it was the primary military convoy to ship troops … and it became the destination for everyone’s favorite two-week vacation.”

When it opened in 1926, the road from Chicago to Santa Monica, California, was the first all-weather road connecting the Midwest and the West Coast, Thomas said in his testimony. It was celebrated in songs and movies and came to represent typical mid-century roadside Americana.

But the road was gradually eclipsed by the interstate highway system and now exists only in limited stretches like the one through Williams, the last section of the road to be bypassed by an interstate.

Thomas said one advantage of the bill is that it would restore “all of the black-and-white iconic Route 66 highway shields” that originally lined the road.

“One of the biggest challenges of people traveling Route 66 … today is simply making sure they’re on the road,” he said.

The Park Service did a feasibility study on the road in 1990, but Congress “declined to designate Route 66 as a National Historic Trail opting, instead, to create the Route 66 Corridor Preservation Program,” Masica said. But that program is scheduled to expire in fiscal 2019.

The bill would “support the continued preservation and commemoration goals of the existing program, but in a manner consistent with the … National Trails System Act,” Masica said. It would not affect funding or maintenance.

Lori Pappas, the media relations manager for the Flagstaff Convention and Visitors Bureau, said the road is the “heartbeat” of Flagstaff’s tourism industry, and contributes not only to the city but to the whole state’s economy.

“It’s iconic – not just domestically but internationally,” Pappas said. “It definitely fits into the area where it is really easy to check off your bucket list.”

Hall said embracing the highway’s history has worked “beautifully” in Winslow, where the iconic Route 66 shield signs are seen throughout town – which also includes a corner statue that pays homage to an Eagles song that references the road and “standing on a corner in Winslow, Arizona.”

While the historic road is popular with American tourists, Hall said that international travelers were the most frequent visitors.

“The Europeans love Route 66,” Hall said. “It makes sense, if you ask them they have seen documentaries about America that feature the road.”

And while he can’t speak for other towns on the 2,400-mile route, Hall said it “works beautifully for us in Winslow.”