Francisco Tavira, 62, earns $12 an hour at Sierra Sun Landscaping in Tempe, and spends about $20 a month to refill his water bottles. (Photo by Andrea Jaramillo Valencia/News21) 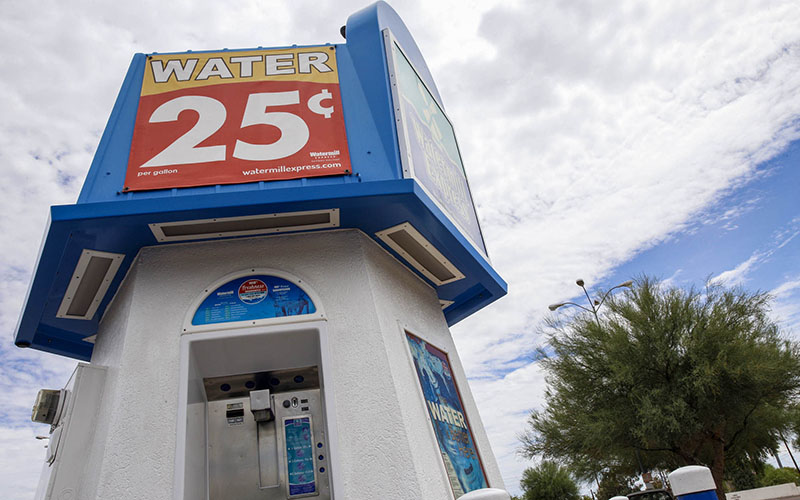 Watermill Express was founded in Brighton, Colo. and is one of many self-serve drinking water companies in the country. Its main locations are in California’s San Joaquin Valley, Arizona, Florida, New Mexico, Nevada, Texas, Illinois and Colorado. (Photo by Andrea Jaramillo Valencia/News21) 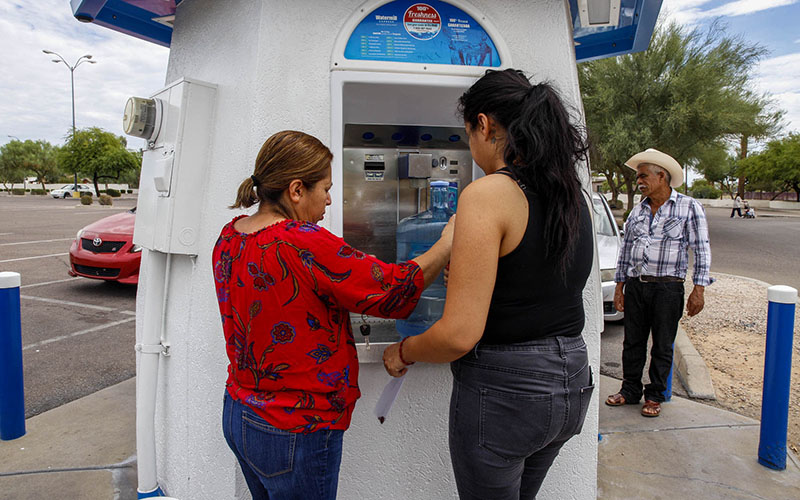 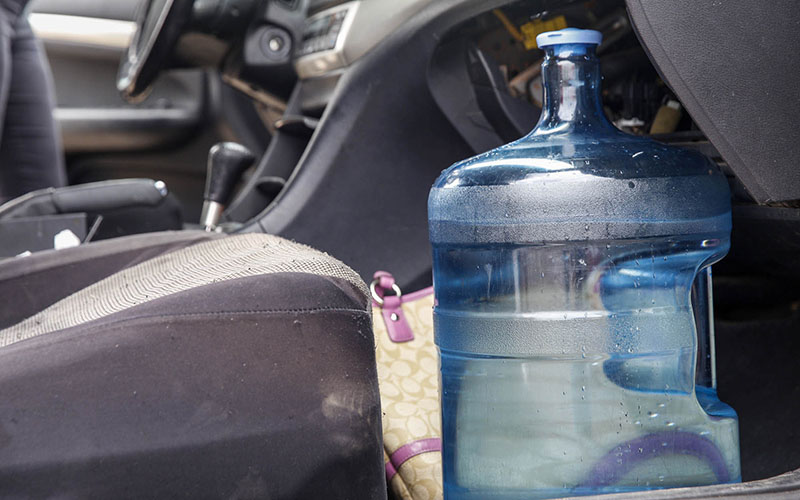 PHOENIX — Dolores Escobar takes a 30-minute bus ride every Sunday from her house to the closest water-vending machine and carries eight empty gallon jugs with her to refill them.

During hot seasons, she travels twice a week. She spends nearly $50 a month on the water, plus her bus tickets. The Phoenix resident said she didn’t like the taste of the tap water at her home, which she said has as a “metallic taste.”

These studies indicate that many Latinos believe their water is unsafe, don’t like the taste or the odor, or repeat the cultural patterns from their home countries, where tap water isn’t safe to drink.

Twenty-nine journalism students from 18 universities spent months this year reporting on drinking water contamination in the U.S. from a variety of sites and viewpoints. The full 10-part Carnegie-Knight News21 project, “Troubled Water,” and an accompanying documentary can be found here.

Paloma Beamer, a researcher at the University of Arizona’s Mel and Enid Zuckerman College of Public Health, led one of those studies in Nogales, Arizona. Beamer said nearly 80 percent of the 90 Latino residents surveyed didn’t drink tap water, and most of them thought it was as unsafe as drinking and driving, and more unsafe than smoking. They relied on bottled water and water-vending machines.

Latinos in Tucson responded similarly. According to the 2013 American Housing Survey, Latinos were more likely than whites and African-Americans to distrust their tap water and buy bottled water to replace it.

Dulce Estrada, who works at a Ranch Market in Phoenix, said she doesn’t drink or cook with tap water because she heard “the pipes are damaged” and because she never drank tap water when she lived in Mexico.

Beamer’s research indicated that 73 percent of the people surveyed said they would drink the tap water if they knew it was safe – even if they didn’t like the taste.

Beamer’s team also did water-quality tests during their home visits in Nogales and found no significant difference between the tap water and the bottled or vended water Latino residents drank, except in cases where they found water stored in reusable containers that weren’t properly cleaned.

Although Beamer’s water samples came out clean, water contamination poses a problem in many other predominantly Latino communities.

Not only that, Latinos are more likely to live in states with higher water-system violations reported to the Environmental Protection Agency, according to a national sample study led by Vanderbilt University’s economist William Viscusi.

Latinos reported more pipe leakage problems than whites, although less than African-Americans and Native Americans, according to the 2015 American Housing Survey. Leaky water pipes can be a sign of corrosion or deterioration, which affects water quality.

But the concern isn’t just financial. Beamer said that not drinking tap water increases Latinos’ risk of developing diabetes because they tend to consume sugary drinks instead of water.

According to the Centers for Disease Control and Prevention, Latinos are more likely to develop Type 2 diabetes than whites.

This report is part of the “Troubled Water” project produced by the Carnegie-Knight News21 initiative, a national investigative reporting project by top college journalism students and recent graduates from across the country and headquartered at the Walter Cronkite School of Journalism and Mass Communication at Arizona State University. For the complete “Troubled Water” project, visit troubledwater.news21.com