Penzone to inmates on hunger strike: Food is nutritious, not delicious 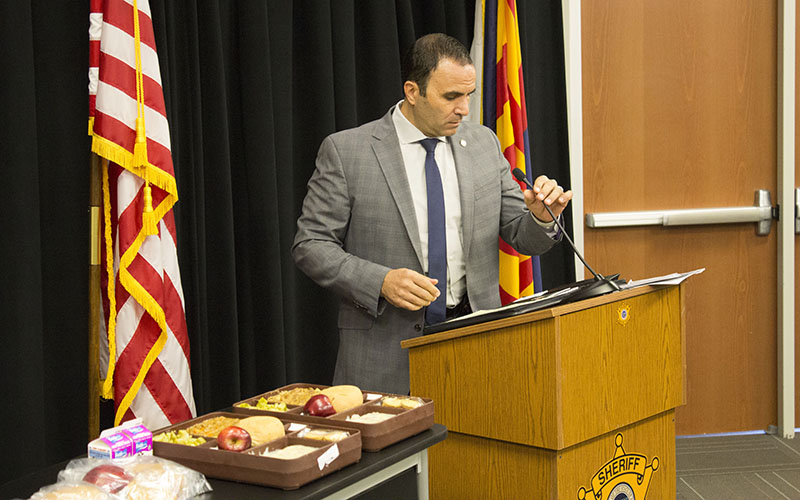 Maricopa County Sheriff Paul Penzone said the taste of the food served in jail is “low on his list of priorities.” (Photo by Kianna Gardner/Cronkite News) 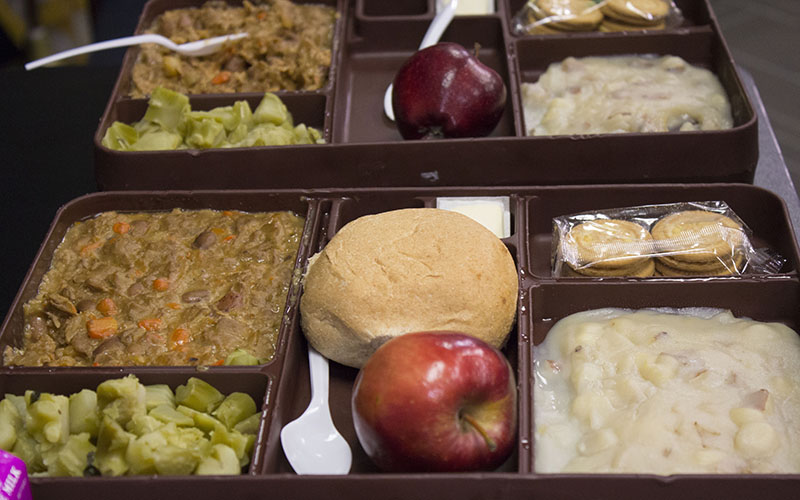 Dinner is served around 5 p.m. to about 8,000 inmates. Breakfast, the other meal of the day, is at 8 a.m. (Photo by Kianna Gardner/Cronkite News)

PHOENIX – Maricopa County jail inmates went on a three-day hunger strike over the quality of meals served behind bars, but Sheriff Paul Penzone said Wednesday that taste is not the point.

“Meeting the needs of this county as it relates to public safety and attention is 1A for me,” Penzone said. “Down at the very bottom is whether or not the detainees are happy with the taste of the food they receive.”

Mickey Hannon, the father of an inmate, said Tuesday that his son is eating “slop.”

Salvador Reza, a community organizer for Tonatierra Barrio Defense Committee, said at Tuesday’s news conference that inmates were going on strike to protest food conditions. The strike is expected to go through Thursday.

“Same thing that Arpaio used to say. Why can’t they give them real food? Why can’t they give them the food that they can see what they’re eating? I think the dogs in the pound probably get better food than the people in there,” Reza said, referring to former Sheriff Joe Arpaio, known for flaunting bologna sandwiches for meals and reducing meals to two per day to save taxpayer money.

Penzone said inmates consume more than 16,000 meals daily. If something as simple as oatmeal was added to the menu, taxpayers would pay an estimated $7,000 a year.

“Quite frankly, if the issue is the taste of the food, my recommendation for you is don’t commit crimes and come to jail because this is what we will be serving,” Penzone said. “It doesn’t taste terrible, but it sure doesn’t taste good.”

Penzone downplayed the strike, saying an estimated .006 percent of the county jail population was participating.

Inmates receive breakfast that includes fruit, peanut butter and fresh-baked bread, and dinner consisting of vegetables, bean soup, potatoes and other side dishes. The meals meet USDA standards for nutrition, are around 2,600 calories combined and also meet the majority of religious and dietary needs of the inmates, MCSO officials said.

Penzone, who recently visited the food facilities to approve the meals, said the courts and in-house nutritionists also approved the food.

“With a population of over 8,000 inmates every day, we do not have the capacity, nor would I be supportive, of having an à la carte menu to meet the needs and expectations of everyone in custody,” Penzone said.

Inmates who don’t want the usual menu items can buy snacks and desserts like cheese sticks, tortillas, candy, popcorn, cupcakes, pickles and “chili in a pouch.”