When a rescue worker showed up at the nonprofit’s Phoenix facility with a cardboard crate in her hands on a recent Friday afternoon, a spokeswoman looked over and said, “Don’t bring them more kittens. They can’t (take them).” 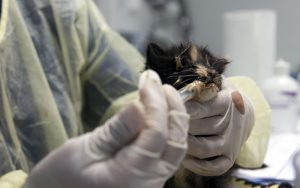 Between staffing, medical and food supplies, it costs the Arizona Humane Society nearly $200,000 to operate the Bottle Baby Intensive Care Unit yearly, according to its website. (Photo by Maddy Ryan/Cronkite News)

The worker hesitantly replied, “Just one.”

From the time newborn kittens arrive at the ICU until they qualify for adoption, it costs the Arizona Humane Society an average of $1,149 per kitten, spokeswoman Bretta Nelson said.

“The cost for these little guys is astronomical,” Nelson said. “We don’t euthanize for space or resources, so these guys can stay as long as they want.”

The ICU takes care of kittens that range in age from newborns – which require 24-hour care – to older kittens that need socialization while they gain weight in preparation for adoption.

Between staffing, medical and food supplies, it costs the Arizona Humane Society nearly $200,000 to operate the ICU yearly, according to its website.

The process of caring for these kittens is extensive. 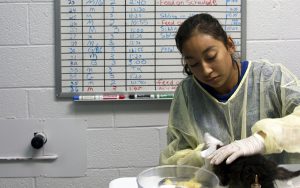 Workers place new kittens in a kennel outfitted with blankets, food, water and a heating source – similar to the warmth of their mother. One by one, the workers weigh and record the kittens’ information on charts. Workers feed the kittens formula and record their weight again and then stimulate the kittens to help them relieve themselves, just as their mother would have done.

They must repeat the feeding and weighing process every couple of hours.

“You can always tell when they’re getting hungry again because they start to get really loud,” Nelson said.

While many volunteers in the ICU work four-hour shifts, many employees such as Simone Kalham work an 11-hour shift.

“The night shift is very busy. We are the only team at the (society) that works 24/7,” Kalham said in an email. “I am part of a dedicated team, saving the lives of kittens that otherwise would have no chance. We cannot save every kitten, but every one we do save is a positive impact.” 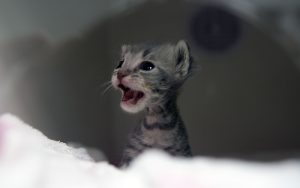 “Anything over that we really can’t care for them the way we should be able to,” Nelson said. “So right now, with us being over 80, we are over capacity and can’t take any more in from the public.”

The facility has more than 500 cats total. Because the kittens need so much extra care, the nonprofit started a “kit-napping” campaign to reduce the number of kittens people bring into the facility. This social campaign urges people who find litters to avoid “kit-napping” them by removing the kittens from the care of their mother, even if the mother isn’t around.

“The campaign helps us to not only better manage the intake of kittens coming in, but also helps give kittens better one-on-one care from good Samaritans rather than being one of several kittens here at the shelter,” spokesman Brad Faye said in an email. “Not to mention the fact that it reminds people that the best way to ensure the survival of these kittens is to keep them with their mother.”

Many of the kittens brought into the Arizona Humane Society are too young to fend for themselves – in comes the Bottle Baby ICU. 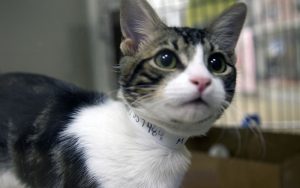 The Arizona Humane Society in Phoenix has more than 500 cats at its facility. (Photo by Maddy Ryan/Cronkite News)

“Even with the amazing facility that we have, the survival rate is not that good because they need to be with their mothers,” Nelson said. “That’s the best way for them to survive.”

If there is no sign of the mother, the Arizona Humane Society encourages “care-in-place” tactics. Caring in place requires feeding and care for the newborn kittens at home. The organization provides free kitten care kits.

The kits include formula, bottles, feeding syringes and a heating source.

“We have received 53 calls (this year) regarding the care kits we offer, which has led to 175 kittens/mothers being cared for outside of our shelter,” Faye said in an email. “These kits help caretakers provide for the kitten for up to eight weeks, at which point they can be brought in for spay/neuter services.”

The Arizona Humane Society provides tutorials for care-in-place services on its website at azhumane.org.

“You can go through an online orientation, and it’s super quick. You can do it at home, on a Saturday morning in your pajamas,” Nelson said.