Immigration advocates at a Center for American Progress event Thursday, when they called on colleges and universities to adopt policies to protect DACA students, from tuition support all the way up to refusing to work with immigration officials. (Photo by Andrew Nicla/Cronkite News) 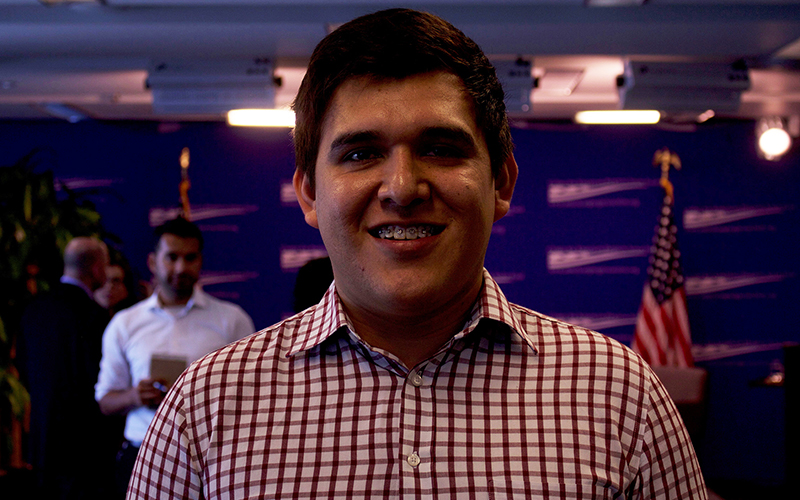 Juan Belman, an organizer with University Leadership Initiative, spoke at an event organized by the Center for American Progress. Belman said colleges that do not support undocumented students do not understand the value they bring to their schools and communities. (Photo by Andrew Nicla/Cronkite News)

WASHINGTON – Colleges and universities may not be able to change immigration law, but they can do more to help those students faced with losing their protection from deportation.

That was the message from a panel of immigration advocates this week who urged college students across the nation to push school administrators for policies that support and ensure the well-being of all undocumented students, with or without DACA protection.

Those policies could include safeguarding students from immigration enforcement, offering financial aid, and providing free legal services and consultation.

“There’s no way that they (universities) can change immigration law,” Juan Belman, an organizer with the University Leadership Initiative, said at the Thursday event organized by Generation Progress. “So I think what universities can do is provide resources to students so that they can get an education.”

But some state lawmakers pushed back against the idea Friday. While they expressed sympathy for DACA recipients, they said universities – like states – need to leave decisions on DACA to Congress.

“In Arizona we don’t have the direct authority to set immigration policy, at least the federal government keeps telling us that,” said Rep. Bob Thorpe, R-Flagstaff. “I’m certainly hopeful that the folks in Washington will step up and make those decisions that they’ve already told us at the state level we’re not allowed to make.”

“Those decisions” include the fate of the roughly 800,000 immigrants protected by Deferred Action for Childhood Arrivals, an Obama-era program that lets people apply to temporary protection from deportation if they were brought to the country illegally as children.

Critics have called that an example of presidential overreach, and the Trump administration announced last month that it will “wind down” DACA over the next six months, accepting no new applications and only renewing coverage for those people whose current protection was set to expire before March 5.

After that time, DACA recipients will become eligible for deportation when their coverage lapses, although Department of Homeland Security officials have said those people will be a low priority for removal.

The administration said the six-month wind-down was meant to give Congress time to approve a plan to protect current DACA recipients, and several lawmakers have introduced bills that would protect those immigrants and, ultimately, give them a path to citizenship.

In addition to calling for university support of DACA students, advocates at Thursday’s event also said they want a vote on a “clean” Dream Act, the bill that would preserve all of the protections of DACA. But advocates don’t want it amended to include language for a border wall or stiffer immigration enforcement – amendments that Attorney General Jeff Sessions said this week will be needed for any bill to be palatable to the administration.

The advocates said that until Congress acts, colleges should take steps to help DACA students who could face some tough choices in March. Their recommendations grew out of a survey that asked 24 schools what protections they provide DACA recipients on their campuses.

Among those were policies to bar local police and immigration enforcement from campus unless they had a warrant or subpoena authorizing an immigration action, to provide free legal and consultation services and “ensure safe and affordable” housing. Another proposal urged colleges to not enforce immigration law.

But Rep. Paul Mosley, R-Lake Havasu, warned that declaring a campus, or any place, a “sanctuary” space can backfire.

“When you declare a sanctuary campus or a sanctuary city, you’re waving a flag to people who are not the best of individuals, who don’t have clean records, who might commit heinous acts of crime,” said Mosley, although he added that “those cases are rare, so very rare.”

Mosley said universities are free to support their students and that he has compassion for DACA recipients and undocumented immigrants, most of whom he said are “good people.” But he would not support sanctuary campus policies.

No Arizona university has such a policy, but the schools have reached out to DACA students in other ways.

DACA recipients can currently qualify for in-state tuition at the state’s three public universities, all of which signed on to an American Council on Education letter – with hundreds of other schools – urging congressional leaders to take action to protect DREAMers. Officials at the campuses have also pledged various forms of support,

But Thorpe, who serve as vice chairman of the House Government and Higher Education Committee, pointed to a voter-approved 2006 ballot proposition that denies in-state tuition to undocumented students. Thorpe said he said he would not “want to punish young people, especially people that are trying to get ahead in the world and get an education,” but that the tuition question “boils down to fairness.”

“If you have a student that is not an American citizen and that is receiving in-state tuition, that means that the taxpayers are paying a fee, they’re paying extra taxes to provide an incentive, a lower cost of tuition,” Thorpe said.

But Belman called that a short-sighted approach.