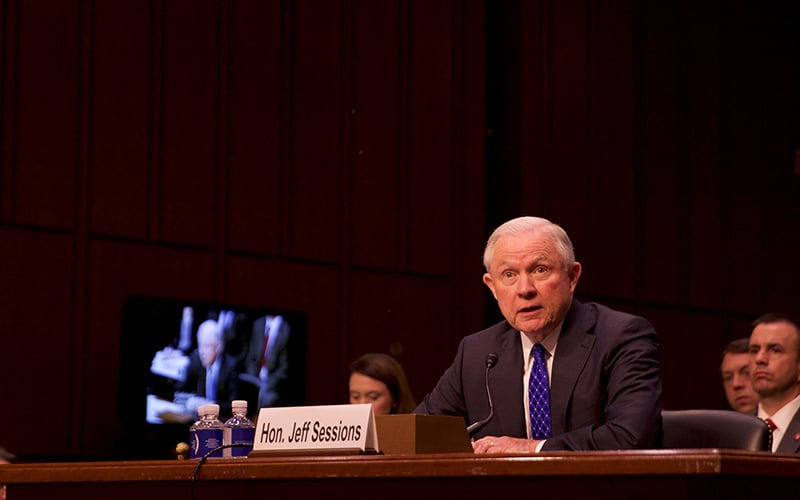 Attorney General Jeff Sessions defended the Trump administration and its Justice Department under his leadership in a five-hour hearing before the Senate Judiciary Committee. (Photo by Andrew Nicla/Cronkite News) 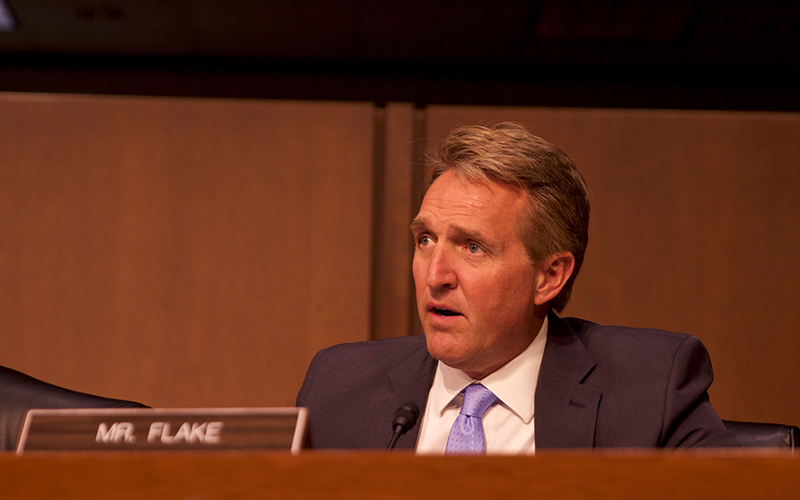 Sen. Jeff Flake, R-Arizona, wanted to know the progress of a Justice Department investigation of Backpage.com, an online personal ads site that critics have said is used by human traffickers. (Photo by Andrew Nicla/Cronkite News)

WASHINGTON – Attorney General Jeff Sessions told a Senate panel Wednesday that he could accept a DACA replacement bill if it is coupled with border security measures, and that any deal has to be “more than just an amnesty.”

Sessions also defended the administration’s decision to rescind the Obama-era Deferred Action for Childhood Arrivals program, telling the Senate Judiciary Committee that DACA “could not be sustained” and that it was “unlawful.”

The comments came in a sometimes testy five-hour hearing during which Sessions clashed with his former colleagues, who asked about contacts with Russia during the 2016 election, sanctuary cities, the travel ban and President Donald Trump’s pardon of former Maricopa County Sheriff Joe Arpaio, among other topics.

Sessions said he was “not aware” if the Arpaio decision followed the Justice Department’s usual vetting process for pardons, and he refused to answer questions about whether the president approached him before the pardon was announced.

But he insisted that Trump had the authority to pardon Arpaio, who was convicted of a misdemeanor count of criminal contempt of court for refusing to follow a federal judge’s order that his deputies stop racially profiling minority motorists for traffic stop.

“The president has the power to issue pardons with or without the Department of Justice involved,” Sessions said in response to a question from Sen. Dianne Feinstein, D-California. “That has been done in the past in some very dramatic type pardons. This pardon, I think, was well within the power of the president to do.”

It was Sessions’ first appearance before the committee since his confirmation hearing in January, and it came as Congress takes up the question of what to do with DACA, after the Trump administration announced plans to phase out the program by March 5.

The DACA program, created by President Barack Obama’s executive order, let immigrants who were children when they were brought to this country illegally, apply to have their deportation deferred for two years, and receive a permit to work or go to school here during that time.

The program currently protects about 800,000 “DREAMers,” who would be at risk of deportation if their permits run out and they cannot get a renewal.

Sessions, who announced on Sept. 5 that DACA would end in six months, said Wednesday that the delay was designed to let Congress pass a replacement plan by March. But he was clearly frustrated Wednesday by lawmakers’ failure to act, saying at one point that rather than ask what will happen to DACA recipients after March 5, Congress should take action and change the law.

In the weeks since Sessions announced the “wind-down” of DACA, lawmakers have come forth with a number of proposals that would extend protections for current DREAMers to varying degrees, including identical versions of the Dream Act in the House and Senate. All have some pathway to citizenship for DACA recipients, though citizenship would not be guaranteed in any of the bills, which have varying levels of requirements immigrants would have to meet.

While the administration believes Congress should replace DACA, Sessions said, he cautioned that that support is not unconditional.

“I have not supported explicitly anything about citizenship (in a new bill),” Sessions told Sen. Lindsey Graham, R-South Carolina. “But I am prepared to say, and I think I’ve said previously, something could be worked out on this. But it can’t be one-sided.”

In addition to DACA, each senator had particular questions for Sessions, including Sen. Jeff Flake, R-Arizona, who asked about a recent federal court ruling against uniform handcuffing of defendants in courtrooms. Sessions said he was not familiar with the ruling but would look into it, adding that in his experience “some people need to be shackled, I’ve always thought.”

He was also unable to answer Flake’s request for an update on the investigation into Backpage.com, online personal ads that have been linked to human trafficking operations. While he did not have a specific answer, Sessions insisted that human trafficking is a priority saying the department “can do more and we will do more.”

As the hearing wound down, Sessions reminded lawmakers that the answer to threats facing DACA recipients “is in your hands.” and he urged them to take action and “get on with it.”

“It’s not going to work with simply an amnesty without any improvement in the loopholes and problems we’ve got in immigration,” Sessions said. “But if we work together, something can be done on that.”