Representatives from about 20 public safety departments around Arizona, including Phoenix and Flagstaff police, and Customs and Border Protection, will recruit at a law-enforcement career fair in Phoenix on Saturday.

“An area where we have found we are consistently lacking is in the recruitment of young people,” Col. Frank Milstead, director of the Arizona Department of Public Safety, said at news conference Monday.

The career fair, 10 a.m. to noon Saturday at the north Valley campus of Northern Arizona University, is among police agency efforts to recruit a more diverse and younger force.

As more African-American, Latino and Native American recruits enter law enforcement, department leaders ultimately would like officers to serve and engage with the communities they grew up in, acting as a familiar police presence.

Officials believe that younger men and women will be key to filling hundreds of vacancies.

In the Maricopa County Sheriff’s Office alone there are more than 300 job openings, about 250 of which are for detention officers, Milstead said.

Milstead said students as young as 16 years old can go into law enforcement in a civilian position and can begin moving up the sworn officer ranks at 18.

“If we can catch them at the high school age or maybe a little before, that’s really where we will begin to see our numbers increase,” Williams said. 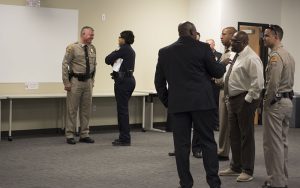 Representatives of law enforcement agencies in Arizona want to diversify their ranks with more young people, women and people of color. A job fair on Saturday will focus on hundreds of vacancies. (Photo by Kianna Gardner/Cronkite News)

Two challenges of recruiting young people are finding those with integrity and no history of using drugs, Milstead said. Still, some of the most promising officers come from tough backgrounds.

“Some of our best recruits ended up being kids that grew up in the school of hard knocks. We aren’t looking for perfect human beings, we are looking for genuine human beings,” Milstead said.

That gap between the diversity of a community’s population and the public safety agencies that serve them needs to shrink, the leaders said.