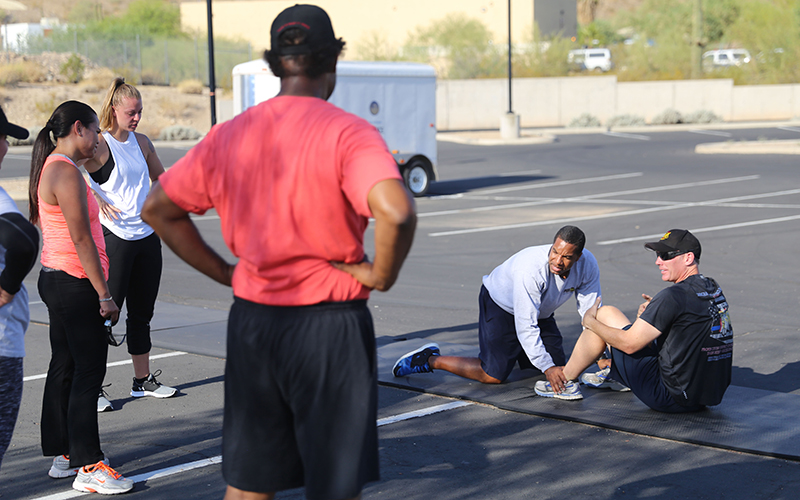 Officer Chris McCloud alerts them to the grueling practice exercises ahead. He tells them if they get the urge to throw up, they should at least veer off into the dirt.

Maribel Silva, the first to finish the run, smiled as sweat dripped down her neck.

“People sometimes have the wrong view of cops,” she said at the regional Arizona Law Enforcement Academy near South Mountain. “People think they’re mean and stuff. And not everybody’s like that, I think. I want to show them that we – or the cops – that we’re human, that they’re humans,” she said.

“I said that as though I was already a cop.” 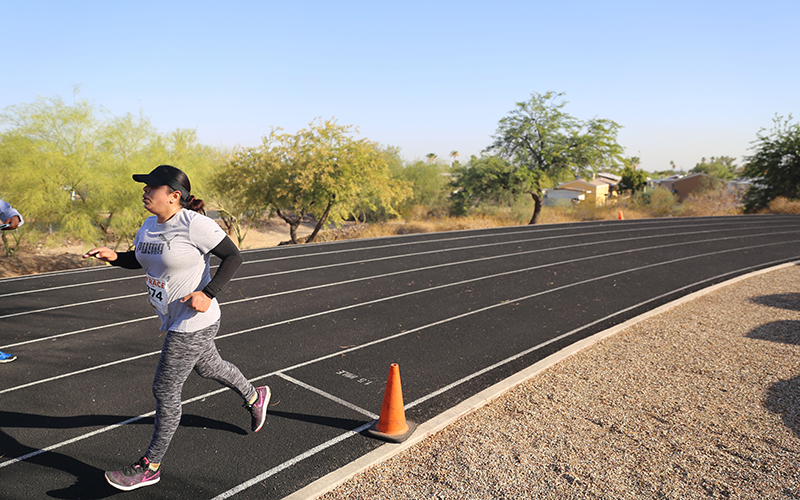 Maribel Silva, who wants to move from managing an auto-parts store to becoming a Phoenix police officer, completes a lap on the track at a law enforement academy. She was the first recruit to finish. (Photo by Chris Benincaso/Cronkite News)

Phoenix police, after a long hiring freeze and cutbacks that started during the recession in 2008 and ended in 2015, started to fill vacant positions.

The city is adding 259 police officers to its ranks during the next year, according to Jeff Barton, the city’s budget and research director.

The goal includes moves to hire more women and people of color to better reflect the communities they serve, an issue raised by department and community leaders.

Silva, whose father was a police officer in Mexico, said speaking the same language as the community you serve matters.

The majority of the police force is white and male, according to police data. Out of more than 2,900 sworn officers, 2,070 are white and 366 are women.

The department has recruited 622 officers since the hiring freeze was lifted, including 218 recruits who are of Hispanic, African-American, Asian or Native American descent. About 35 percent of the recruits are people of color.

Silva, who now manages an auto-parts store, said becoming a police officer has been her dream since she was a girl. She said she’s always wanted to make the community a safer place.

Adding to the force

Barton said people are applying to the department in a steady stream.

“The police academy’s full,” Barton said. “The recruiting section of the police department has been making rounds all across the country, going to colleges, universities, military bases. They’ve been doing a great job of hiring.”

The goal is to bring staffing levels to 3,125 officers, or a minimum of two officers for every 1,000 residents by June next year, Barton said.

He said Phoenix ranked favorably when compared with other U.S. cities for healthy officer-resident ratios, ensuring enough officers are on the streets to keep communities and themselves safe.