Not Your Typical Deli hires employees diagnosed with autism and other developmental issues.

Cashier Cordell Sherwood, who was diagnosed with autism at a young age, remembers people would ask his parents how they felt knowing their child would never be normal.

“That is the kind of misconception of autism that needs to stop,” Sherwood said. Not Your Typical Deli is trying to break those types of misconceptions. More than 70 percent of its 15 employees have a disability.

Sherwood said working at the deli has helped him gain independence. 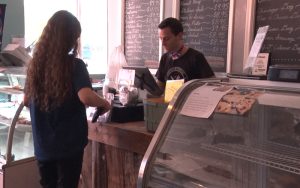 Cordell Sherwood, who works at Not Your Typical Deli in Gilbert, said working at the deli has given him confidence. (Photo by Nicole Gutierrez/Cronkite News)

“Our managers and Chef W. (treat) us not for our autism, but just like normal employees,” he said.

Two-thirds of adults in their early 20s with autism were unemployed, according to the National Longitudinal Transition Study-2.

“We’re here to work, and we make a difference just by being who we are and by working as hard as we possibly can,” Sherwood said.

Chef W. Rieth, co-owner of the deli, said they base their success on how many jobs they create, not on how much money they make.

“Consistency is a big part of a successful restaurant,” he said. “(The employees with autism) thrive with routine, which makes working at a restaurant very easy, makes us owning the restaurant even happier because it runs like a top.”

Most customers who come in the door do so because of positive online reviews, and they don’t necessarily know about the deli’s commitment to hiring those with disabilities, Rieth said.

Not Your Typical Deli, now near Baseline Road and Val Vista Drive, will move to a larger location in Gilbert Town Square, which will open in mid-November and have longer hours.