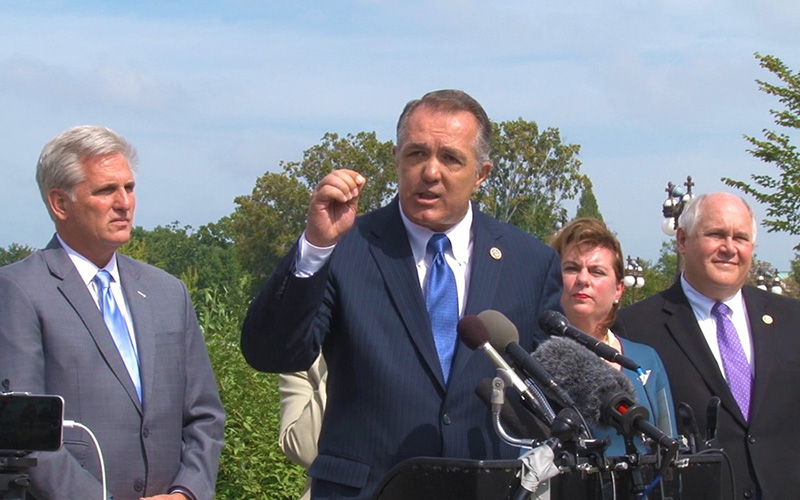 Rep. Trent Franks, R-Glendale, concedes that odds of his Pain-Capable Unborn Chilld Protection Act getting out of the Senate are slim, but he plans to keep on fighting for the measure. (Photo by Fraser Allan Best/Cronkite News) 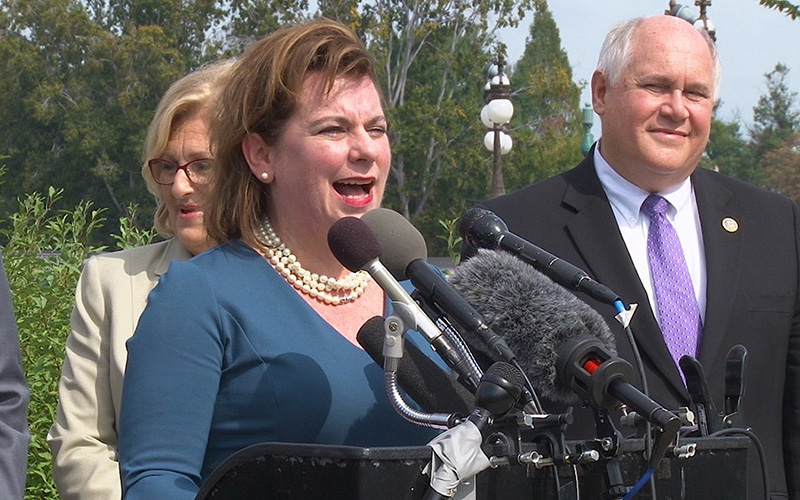 Marjorie Dannenfelse, president of the Susan B. Anthony List, said she is encouraged that President Donald Trump would sign the “pain-capable” abortion bill if it reached his desk. (Photo by Fraser Allan Best/Cronkite News)

WASHINGTON – House leaders said they hope to have a vote as soon as next week on a bill by Rep. Trent Franks, R-Glendale, that would prohibit abortions in most cases after 20 weeks of pregnancy.

Franks has introduced the Pain-Capable Unborn Child Protection Act at least three times, and it has failed each time, but backers of the bill said they have to keep trying.

“For God’s sake, ladies and gentlemen, this cannot be who we truly are,” Franks said at a Tuesday news conference promoting the bill. “It is time for all of us to be honest with ourselves and with each other and ask the real question: Does abortion on demand really kill little human babies?”

But a spokeswoman for Planned Parenthood Arizona said Franks’ repeated attempts to pass the bill is “testament to the fact that he is part of a very small contingent of anti-choice extremists.” This bill will meet the same fate as earlier ones, said Taylor Tucker, and if it manages to pass, it will be struck down in court as similar measures have been.

“The courts are some of the last line of defense against this increasingly dangerous legislation,” Tucker said.

“The real agenda is to ban abortion completely,” she said. “They are emboldened by the Trump administration and his
presidency.”

Backers of Franks’s bill said Tuesday that they are encouraged by President Donald Trump’s support, but they also conceded that they are not likely to get the 60 votes in the Senate to get past a filibuster there.

“The only significant impediment to this bill is the Senate filibuster,” Franks said. Despite small odds of final passage, Franks insisted it is not just a “messaging bill,” and said the majority of Americans support banning abortions after 20 weeks.

The Pain-Capable Unborn Child Protection Act would ban abortions after 20 weeks of pregnancy, except in cases of rape, incest or to save the life of the mother. The 20-week threshold was chosen because that is the period after which a fetus can feel pain, according to bill.

But a similar law that was approved in Arizona in 2012 was struck down as unconstitutional by the 9th U.S. Circuit Court of Appeals, which ruled in 2013 that the law infringed on a woman’s right to an abortion that was recognized by the U.S. Supreme Court in its 1973 Roe v. Wade decision.

But pro-life groups continue to push back against Roe v. Wade. Marjorie Dannenfelser, president of the pro-life Susan B. Anthony List, said she spoke Monday to President Donald Trump who said he would sign the bill if it reaches his desk.

Having a president in the White House who is a vocal pro-life advocate “makes all the difference,” she said.

Dannenfelser had little doubt the House would once again pass the “pain-cabable” bill, but said it would take a “miracle” to get through the current Senate, even though she said the abortion issue should be a concern to a lot of “nervous senators” up for re-election in 2018.

Majority Leader Kevin McCarthy, R-California, called the bill “legislation that will save lives.”

“It’s about drawing a line when babies have grown for 20 weeks, when they can feel pain,” McCarthy said. “At the very least, that’s when we can all agree that they should be protected.”

Franks claimed that most Americans agree with a ban on abortions after 20 weeks, and said allowing the procedure puts the U.S. in the company of “four or five other countries that do that, and they’re countries like North Korea.”

Tucker said she was not surprised that Franks is back with this bill, saying “it’s always been his thing.” She challenged Franks’ claim that people support his bill, however, saying that 70 percent of Americans want Roe v. Wade upheld, and that 60 percent of Arizonans support Planned Parenthood.

Franks remains optimistic he will succeed, even if it may take more tries.

“I do think this bill will be passed and will at some point be passed in the U.S. Senate, and this sunlight of freedom that you and I are standing in will shine on the faces of the unborn in America again,” Franks said.