The inaugural Arizona Pure Water Brew Challenge brought together 26 breweries from across Arizona and tasked them with creating the best-tasting beer using treated wastewater.

“We had no idea how many breweries would compete, but we were shooting for around 32,” said Danielle McPherson from the WaterNow Alliance, which partnered with the challenge. “But we were really excited about the 26 that we did get because a lot of the time, breweries are busy with other commitments, and this takes a lot of time.” 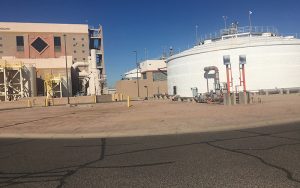 The competition wrapped up earlier this month, and she said it went so well, they want to expand it beyond state lines next year.

The goal of the competition: Inform Arizonans about the importance of conserving water and how people can use technology to safely reuse it.

Organizers supplied the breweries with the water, which they obtained from three Arizona treatment plants, McPherson said. At that point, the water wasn’t potable – or safe to drink. The brew challenge team put the water through a five-step process that started with ultrafiltration and ended with chlorine disinfection.

Despite this extensive process and reassurances about the water’s safety, McPherson said people still have negative feelings about consuming it.

“Public perception is the biggest hurdle,” she said.

McPherson said one way to sway people is to change the words we use to describe it.

“We generally like to stay away from calling it wastewater,” she said. “We tend to use ‘reclaimed’ or ‘highly purified’ water instead.”

“Once they try it, they’re amazed at how good that beer tastes,” Hernandez said. “It’s actually been selling really, really well.”

Phoenix resident Juan Mata said he couldn’t tell the difference between the beer crafted with treated water and other beers.

“Recycled water to good beer? Sure. Let’s do it,” Mata said.

Customer Sammy Evans had not tried the beer, but said she supports the mission.

“We should be using wastewater more appropriately everywhere, and it shouldn’t affect the taste,” she said.

As for the results of the AZ Pure Water Brew Challenge, McPherson said that overall, it was successful.

“We had people take surveys to say if they would be more likely to consume the water,” she said. “The results have not been analyzed yet, but anecdotally, a lot of them were much more open to it.”

She said she was pleased with the news coverage, which helped spread the word about reclaimed water. In her opinion, the future of the competition is promising.

“Our team has talked about having Arizona breweries compete against breweries in California and Nevada,” she said. “We really want to take this state to state.”

The water used the contest was purified through a five-step process. (Graphic courtesy of AZ Pure Water Brew Challenge website)