The new voucher, passed by the state Legislature and supported by Gov. Doug Ducey, would allow 1.1 million students in Arizona to use vouchers.

Voucher supporters say it provides parents and students with more school choice, including the opportunity to attend private school that they otherwise couldn’t afford.

Save Our Schools, which organized the ballot petition putting the expansion on hold until voters decide in the November election, said voucher expansion would rob public schools of financial resources and there are not enough safeguards under the law. 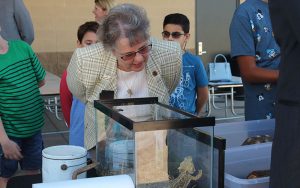 Sampson: Do you have a comment on the recent AzMERIT scores?

Douglas: Well, I’m glad to see that they’re going in the right direction…upward. I’m disappointed that they’re not higher than they were. But…let me say I’m not convinced that’s necessarily a reflection of the great job our teachers are doing. I have never been a fan of the AzMERIT tests and I’m not sure that that’s the best measure of all that our students achieve academically.

Sampson: What would you plan as an alternative to standardized testing?

Douglas: What I hope to see us move to in Arizona is more formative testing. Our teachers can give the test along the course of the year to see how the students are doing, because this testing is intended to measure student achievement and to show us how we can help students be more successful. A test like this was never intended to grade a school, or a district, or a teacher, or to base a teacher’s salary increase on, in my opinion.

Sampson: Do you think there should be fewer tests?

Douglas: Well, people have to understand from a state level there’s not a lot of testing. We have the state-wide test, the AzMERIT that’s required and now the new civics test that is required, but that’s all we mandate on the state level. The rest are chosen by district or by charter schools to, meet their students’ needs. I think some of those tests will help provide our teachers the information that they need on a daily basis to make their students more successful.

Sampson: You visited a charter school today. Do you have any concern about charter schools compared to district schools when it comes to test scores?

Douglas: One of the things that will change now is that we’ll have a menu of assessment and that will let all schools pick what they think serves their students’ needs the best.

Sampson: The district schools are dealing with everything from homeless students to English Language Learners and special needs students. How do they compare?

Douglas: I haven’t looked at the exact breakdown if you’re asking about the AzMERIT scores. I haven’t … had the chance to dig into charter versus traditional district but we will be taking a look at those to see. But really in the charter schools and traditional district schools, it’s about offering the opportunities that the parents think are best for their children. That’s what school choice is really all about, to make sure that the child gets fitted with the right education. I’ve known parents with multiple children in their household: some go to charter (schools), one goes to a traditional district. They use all the options that are available and that’s what’s very important.

Sampson: What are your thoughts on Prop 305?

Stefan Swiat, spokesman for Arizona Department of Education: 305? What are you talking about?

Dan Godzich, Director of Communication/Associate Superintendent of Communications, spoke to Cronkite News and explained that Douglas believed the question about Proposition 305 was referring to earlier referendums and is clearly versed on school vouchers.

CORRECTION: This article has been modified to reflect that Austin Centers for Exceptional Students is a private day school.