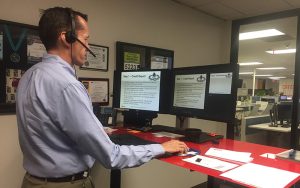 Equifax has created a security website detailing the breach and offering advice on follow-up actions for consumers. People’s names, Social Security numbers, birth dates and addresses were among the identifying information that were stolen, the company said.

The Equifax breach is the latest in a series of online hacks that have potentially exposed consumers’ personal information at organizations ranging from the Maricopa Community Colleges to Target.

Expect scams to arise out of the Equifax scandal. Don’t fall for them.

Allen said scammers will say, “‘Hey, we’re from Equifax. Give us your information. We think you’ve been breached. We’re here to help.’ The biggest piece of advice I can give is don’t give out your confidential information in email or over the phone.”

Cocanower agreed. “It’s really hard to say what the bad guys are going to come up with. I think that you can assume though there’s going to be a tsunami of scams coming,” he said.

You may have legal recourse if your identity is stolen

Netherwood suggests consumers spread out their yearly free credit reports from Equifax, Experian and TransUnion. “Run your credit reports. You get a free one from each of the bureaus once a year,” Netherwood said. “Stack them, use one every four months and anything you see that you don’t like, get it taken care of right away.”

Determine if you’re a victim of the Equifax attack

Equifax has created a secure website for consumers to enter the last six digits of their Social Security number and their last name to determine if their data may have been stolen.

Equifax also has a security service called TrustedID Premier, which will inform consumers on further actions on how to secure their credit card accounts. They are offering the security program to everyone free for a year. Despite confusing wording in the terms, Equifax has clarified that enrolling in this service does not forfeit users from filing class action lawsuits.

Don’t go through other websites to determine if you were a part of the breach, Allen said.

“Make sure that you are going through the right steps to protect your identity,” he said. “I’m sure Lifelock is getting a huge wave of new clients signing up. What I would say is that you don’t necessarily have to take those steps, but do it if you are concerned.”

Cocanower said consumers should consider whether or not freezing their credit accounts is the right option for them.

Watch your financial and other online accounts regularly. Change your passwords frequently. Make them difficult for strangers to figure out.