Protesters outside the office of Sen. Jeff Flake, R-Arizona, make their feelings known on his pledge to vote for a repeal of the Affordable Care Act, better known as Obamacare. A new analysis says repeal could push 32 million Americans off health care. (Photo by Nathan Fish/Cronkite News) 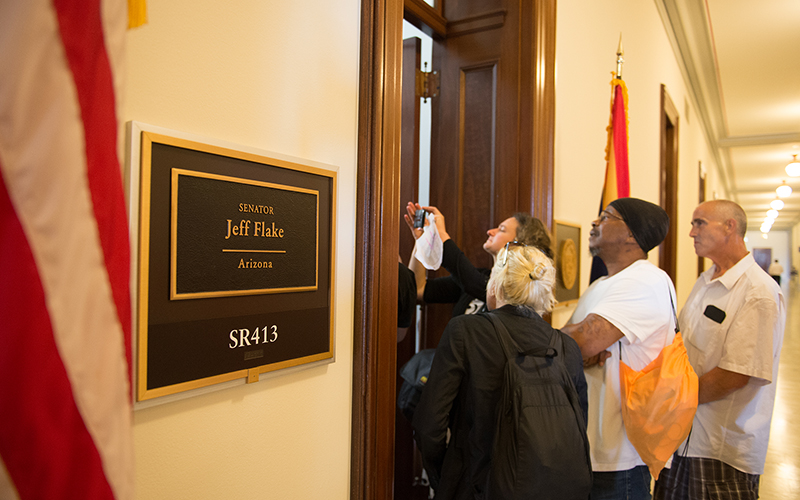 Protesters crowd into the office of Sen. Jeff Flake, R-Arizona, who has said he will vote for a repeal of the Affordable Care Act without a replacement plan in place. A similar repeal passed in 2015, but was vetoed by then-President Barack Obama. (Photo by Nathan Fish/Cronkite News) 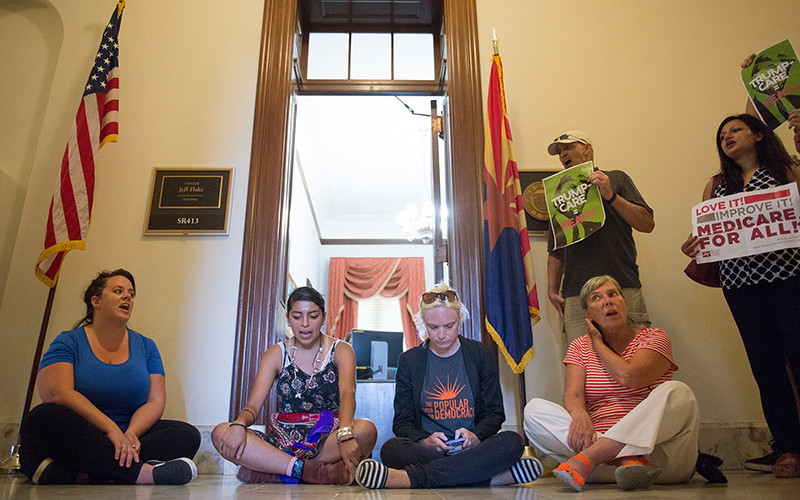 After rallying inside of the Capitol Hill office of Sen. Jeff Flake, R-Arizona, who has said he will vote for a repeal of the Affordable Care Act without a replacement plan in place, protesters sit in the hallway outside the office Wednesday. (Photo by Nathan Fish/Cronkite News) 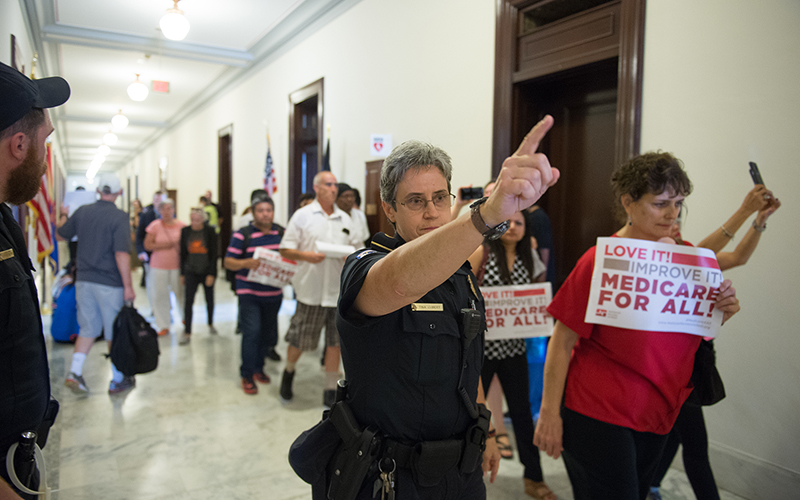 A Capitol Police officer pushes back reporters and onlookers in the Russell Senate Office Building as police prepare to arrest demonstrators for the second time in as many weeks who were there to protest Senate plans to do away with the Affordable Care Act. (Photo by Nathan Fish/Cronkite News) 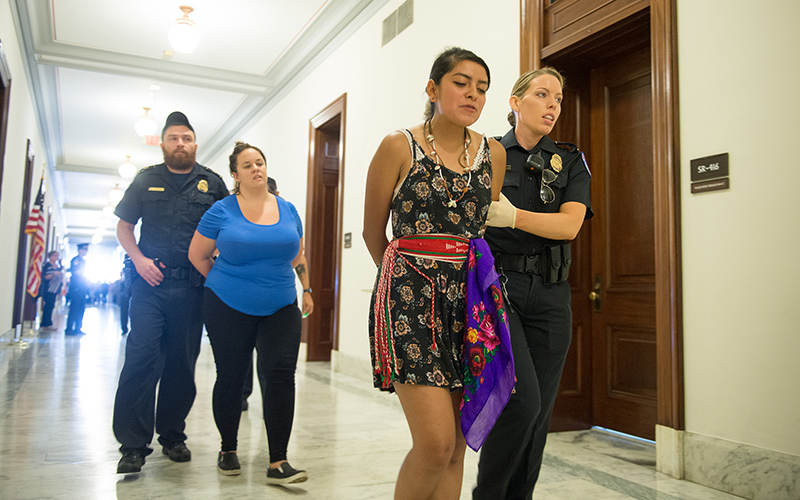 Capitol Police lead protesters out of a Senate office building after arresting them at the office of Sen. Jeff Flake, R-Arizona. For Arizona resident Marlina Garcia, in front, it was her second arrest this month for protesting at Flake’s office. (Photo by Nathan Fish/Cronkite News) 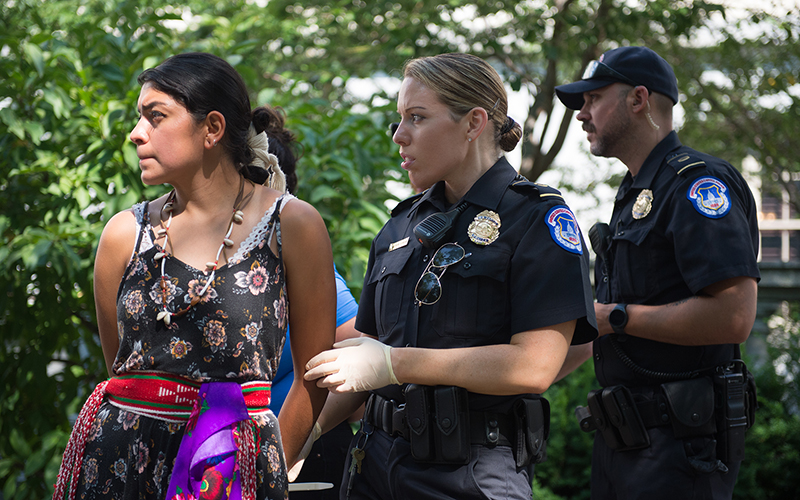 Marlina Garcia, a resident of the Navajo Nation, returned to Washington where she was arrested for the second time in as many weeks Wednesday for protesting outside the office of Sen. Jeff Flake, R-Arizona, against Senate plans to repeal Obamacare. (Photo by Nathan Fish/Cronkite News)

WASHINGTON – A Senate proposal to repeal the Affordable Care Act with no replacement plan in place “would immediately and painfully disrupt the health care system” and could force as many as 709,000 Arizonans off coverage, advocates said this week.

“This bill not only will take us back to the days before health reform, when millions struggled to get access to quality, affordable health care – it will leave us even worse off,” DJ Quinlan, a spokesman for the Arizona Alliance for Healthcare Security, said in statement.

But supporters of an immediate repeal said it will finally provide Americans the “relief” from Obamacare they were promised by Republicans in Congress and the White House.

“The 2015 Obamacare repeal bill is not perfect, but it is a far better start than the legislation considered by both the House and Senate this year,” said Rep. Andy Biggs, R-Gilbert. “The 2015 bill will remove most of Obamacare and pave the way for Americans to receive significant premium relief.”

Republican leaders in the Senate made the decision to return to the 2015 repeal bill after their efforts to replace the Affordable Care Act, better known as Obamacare, fell apart early this week. That measure passed Congress but was vetoed by then-President Barack Obama.

But a new analysis of the repeal language released Wednesday by the Congressional Budget Office estimated that, by 2026, the repeal bill would cost 32 million Americans their coverage by cutting Medicaid funding, while reducing the federal deficit by $473 billion over the same period.

Both of those numbers are significantly higher than the CBO “scores” on House and Senate bills that would have replaced Obamacare.

The CBO also said that nongroup premiums would double by 2026 under a repeal of Obamacare, jumping 25 percent in the first year alone as healthier people dropped insurance because it would no longer be mandated.

The decline in enrollment numbers and increased premiums would in turn lead to insurers fleeing the market, creating a scenario where about half of the U.S. population by 2020 would live in an area where there is not a single insurer participating in the nongroup market.

Sen. Jeff Flake, R-Arizona, had steadfastly refused to say how he would vote on the earlier replacement bills, saying only that they had to be fiscally responsible and could not “pull the rug out from under” Arizonans who needed coverage.

But his office issued a statement statement earlier this week that said Flake would vote for repeal, as he did in 2015 before that measure was vetoed by Obama.

Protesters continued to pressure Flake, gathering outside his offices in Phoenix and Washington on Wednesday to protest the GOP’s plan to repeal. Protesters at Flake’s office in Washington were among hundreds who fanned out across Capitol Hill to rally outside dozens of Senate offices.

Arizona resident Marlina Garcia, of the Navajo Nation, was one of those arrested at Flake’s office Wednesday – her second arrest in as many weeks at the Arizona senator’s Capitol Hill office. But she said it was important to make the return trip.

“Without Medicaid, without Medicare and the Affordable Care Act, what would we have?” Garcia asked, as she stood cuffed outside the Russell Senate Office Building late Wednesday. “Not everyone is made of money and can support themselves through the insurance that costs so much. We don’t have that; we don’t have access to that. Especially the indigenous people – we don’t have that privilege.”

Sen. John McCain, R-Arizona, has not said how he plans to vote on the repeal measure. But when it was clear the replacement bill was failing earlier this week, he called for a bipartisan approach, suggesting both parties “return to regular order” to produce a health care bill that “finally provides Americans with access to quality and affordable health care.”

“One of the major problems with Obamacare was that it was written on a strict party-line basis and driven through Congress without a single Republican vote,” Mccain said in a statement Tuesday.

“As this law continues to crumble in Arizona and states across the country, we must not repeat the original mistakes that led to Obamacare’s failure,” his statement said.