It was a picture of the couple on their wedding day.

Before their marriage, the two were not public about their relationship. The new attention could help others be more comfortable sharing who they are, a Mercury teammate said.

Mercury guard Danielle Robinson says it means a lot that she and others don’t have to hide their beliefs.

“It’s just nice to be comfortable in who you are and like I said, just being able to celebrate and have fun and know exactly who I know I am,” she said.

Before Taurasi’s record breaking game in Los Angeles on Friday, the Mercury held their fourth annual Pride Night for their game against the Chicago Sky. 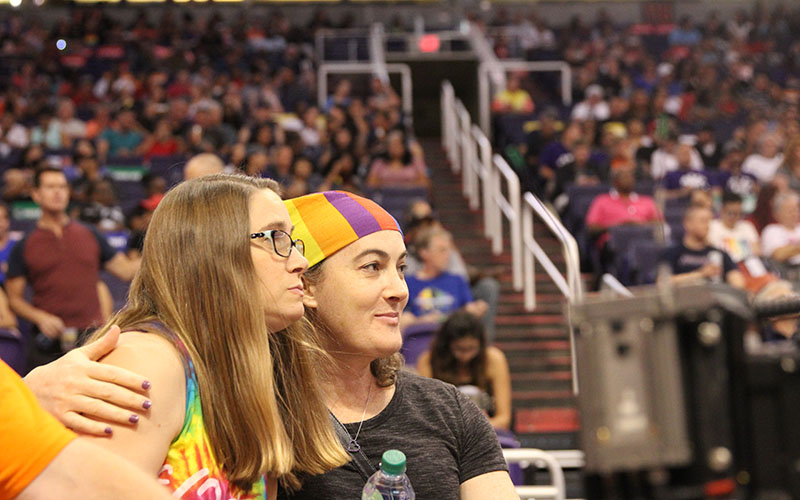 The event included participation by local LGBTQ Community Organizations, including ONE Community, One-N-Ten and the Arizona Gay Volleyball Association. At halftime, Coors Light representative Jonathan Hensley signed ONE Community’s Unity Pledge, created by a local organization to encourage diversity and inclusion in the workplace.

Before Pride Night, several of the players and coaches signed the pledge, making the Mercury the first major professional sports team to do so. It is the largest equality pledge in the United States of America, said Angela Hughey, co-founder and president of ONE Community.

Hughey and her partner have been season-ticket holders since the Mercury’s first year.

“They are really the favorite sports team not only for our LGBTQ community, but they really make sure that they welcome everyone and they lead with their heart,” Hughey said.

The Mercury and the rest of the WNBA have historically been seen as strong supporters of the LGBTQ community.

10,000 double sided Pride Night signs filled the arena to represent a rainbow in honor of the LGBTQ Community. (Photo by Asia Walters/Cronkite News)

“We have more out athletes than any of the other leagues, so it’s an opportunity for us to lead,” Kozar said.

Last year in the New York City Pride Parade, the WNBA and NBA marched for the first time. They were the first two professional leagues to participate in the parade.

Former Los Angeles Dodgers outfielder Glenn Burke was the first Major League Baseball player to be out to his teammates and the first to acknowledge he was gay publically.

In 2013, Jason Collins became the first player in the NBA to come out. Before going public, he told Sports Illustrated he believed he had to “live a certain way. I thought I needed to marry a woman and raise kids with her.”

In the WNBA, the announcement by three-time MVP Sheryl Swoops in 2005 that she was gay was an important moment for many of the league’s athletes who had yet to come out. In an article with ESPN the Magazine, she said she was tired of living a lie.

Many players in the WNBA believe it is easier now to be themselves, including revealing sexual preference.

Cannon believes “there are a lot of people out there that play sports and they are ashamed of who they are, but the WNBA recognizes it and shows that it’s OK to be you. And it makes it a lot easier for girls that are growing up and they see their favorite player who may be just that type of person, and they think that it’s acceptable and it’s okay for them to live that way. 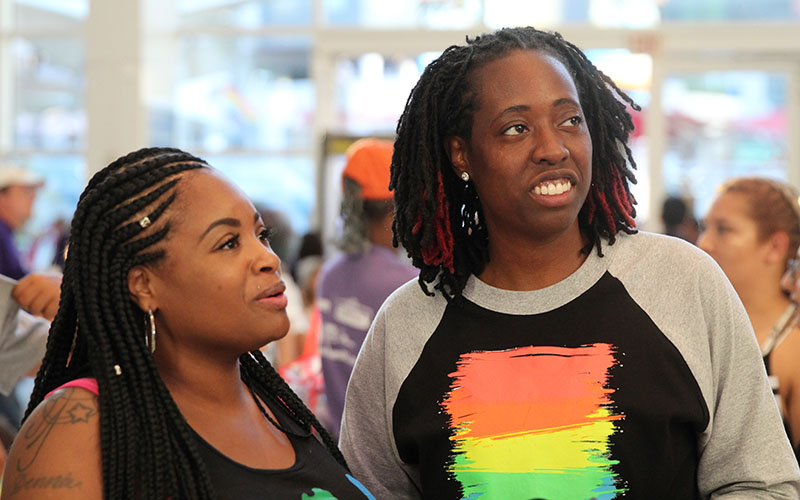 Denna Delt (left) and Ashley Delt (right) feel that Pride Night means a lot to not only adults but the youth as well. (Photo by Asia Walters/Cronkite News)