Her mother worked at the Indian Health Service as a social worker, and aside from a brief desire to be a bird in kindergarten, Wilson knew she wanted to become a doctor.

Wilson attended Chadron State College in Nebraska and then the University of Washington for medical school. After that, she pursued a cardiology fellowship at the University of Arizona’s medical center, and she worked for a native cardiology program in Northern Arizona before coming to Phoenix to work for the Indian Health Service.

“Just growing up, receiving care in the Indian Health Service, knowing there was such a shortage, and never seeing any other native providers, this was something I wanted to do,” Wilson said.

Wilson belongs to an exclusive club. Not only is she the lone cardiologist working for the Indian Health Service in Phoenix, but she’s also Native American, a member of the Oglala Lakota Sioux tribe.

Of the nearly 19,000 graduates of medical school last year in the U.S., only 31 were Native American. Here in Arizona, there’s an estimated 13,542 physicians statewide, and only 107 were Native American – that’s less than 1 percent, according to a database by the Association of American Medical Colleges using 2013 numbers.

Experts said the shortage of Native American doctors in Arizona – in which there are more than 350,000 Native Americans – is concerning because it impacts the effectiveness of health care delivery overall, as well as the research into health disparities. 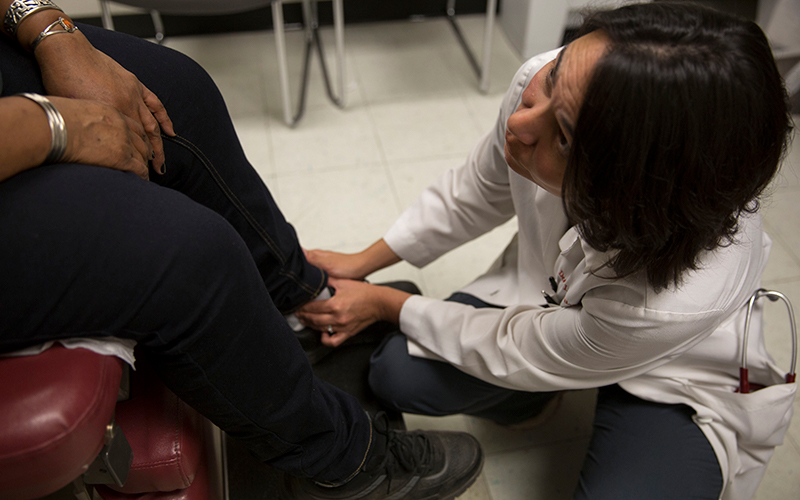 Dr. Dena Wilson has known she’s wanted to become a physician since growing up on the Pine Ridge Indian Reservation in South Dakota. (Photo by Megan Bridgeman/Cronkite News)

Historically, Native Americans have faced more health problems when compared with other Americans.

Native Americans die at higher rates in several categories, including chronic liver disease, diabetes and chronic lower respiratory disease, and they have a life expectancy rate 4.4 years less than all other U.S. races, according to the Indian Health Service.

The Indian Health Service, which provides health services to about 2.2 million of the nation’s estimated 3.7 million Native Americans, suffers from serious staff shortages. Earlier this year, the Government Accountability Office added it and other Native American programs to the “high-risk” list, meaning it’s viewed as highly vulnerable to fraud, waste, abuse and mismanagement.

But how do these disparities in health outcomes relate to a lack of Native American physicians?

“A lot of people think why should that matter?” said Dr. Lukejohn Day, the director of clinical gastroenterology at Zuckerberg San Francisco General Hospital and an associate professor of medicine at the University California, San Francisco. Day also is a member of the Oglala Lakota tribe.

“What a lot of studies have shown is a diverse health care workforce supplies better provider patient communication, follow ups and treatment adherence,” Day said. “Also, what we’ve seen is the more diverse a workforce is, the more research there is on health care disparities.”

And then there’s the “people” part of the equation.

“People tend to comply better when they feel their physicians have a better understanding of who they are and where they come from,” said Dr. Mary Owen, director of the Center of American Indian and Minority Health at the University of Minnesota Duluth campus.

Owen, who also serves on the board of directors for the Association of American Indian Physicians, added that people from diverse backgrounds are more likely to go back and serve in those communities.

“What I try to provide to my patients is a familiarity and understanding of their day-to-day challenges,” said Wilson, the doctor from the Phoenix Indian Health Service. “I grew up on the reservation, and I understand that just going to the grocery store to get healthy ingredients to make a healthy meal is a challenge sometimes.” 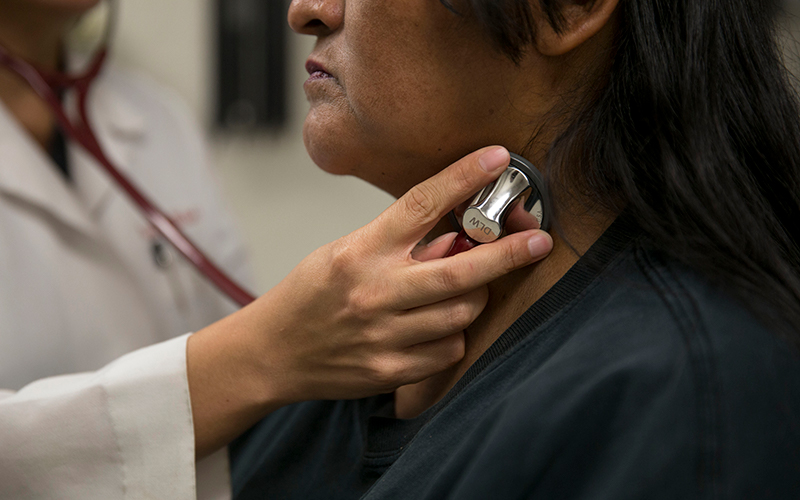 In Arizona, there’s an estimated 13,542 physicians statewide, and only 107 were Native American – that’s less than 1 percent, according to a database by the Association of American Medical Colleges using 2013 numbers. (Photo by Megan Bridgeman/Cronkite News)

From 2012 to 2016, of the nearly 55,000 medical school graduates in the U.S., only 101 were Native American, according to the Association of American Medical Colleges.

Owen said there are a lot of reasons why Native Americans don’t go into medicine.

“To get into medicine requires so many different pieces of a puzzle to come together,” Owen said. “It requires a strong background in science and math, strong communication skills and societal awareness. Pulling all those together from a group of people that have had trauma as long as we have. … We don’t have all the resources that other people take for granted in medicine.”

Owen said officials and community leaders need to make improvements to elementary and high school education for Native Americans, and they need to reach out earlier to Native students.

“If you are hitting them in college and medical school, it might be too late,” he said. “Reach out at the high school and junior high level, and I think that makes a much bigger difference.”

Another challenge exists in the medical school selection process.

Owen said medical schools have a tendency to focus on things like test scores instead of recognizing what a candidate brings to the table that’s not reflected on an application.

Wilson said while her medical school did a great job recognizing the strengths she cultivated through her upbringing, she said the fixation on test scores can be a real problem.

“It’s not just about knowledge,” Wilson said. “Yeah, you have to have knowledge, I’m not saying everyone can get into med school and become a doctor. But just because you didn’t score the highest on your MCATs doesn’t mean you should be excluded.”

Then there’s the fact that just getting into medical school isn’t enough. To survive, one needs a lot of support.

Wilson said one of her biggest challenges was dealing with loneliness. Not only was she a woman in a male-dominated speciality, but she also was a minority. She said running into another Native American was rare.

“For me, sometimes just going home and being back home with my community, I needed that to recharge my batteries,” Wilson said.

Despite the obstacles, Owen said she is optimistic that more Native American physicians will soon enter the fold, but she added that medical schools must look at students in a more holistic fashion.

“All these states should have a much higher number,” she said.

Locally, the University of Arizona is trying to do its part.

There are 23 American Indian students enrolled at the University of Arizona’s two college of medicine programs in Tucson and Phoenix, according to the university.

Additionally, the school also has programs aimed at recruiting and preparing Native students for a career in medicine. These include a pre-admissions workshop with the Association of American Indian Physicians, the Indians Into Medicine grant from the Indian Health Service, and the Navajo Nation Future Physicians’ Scholarship Fund, which helps up to seven Navajo scholars per year pursue a medical degree from the university.